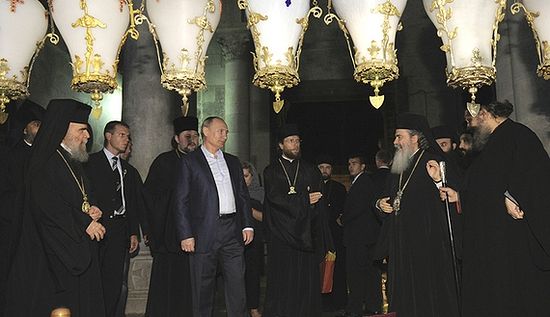 Russia's President Vladimir Putin and Greek Orthodox Patriarch of Jerusalem Metropolitan Theophilos (second from right) stand near the Stone of Anointing, where Christians believe the body of Jesus was prepared for burial, at the Church of the Holy Sepulchre in Jerusalem's Old City, June 26, 2012. Photo: REUTERS/Alexsey Druginyn

Given the diplomatic and military presence that Moscow has recently established on the Mediterranean and in the Levant, it is only natural that its ecclesiastical role experience a resurgence as well. During the last few days, the Russian banner of the two-headed eagle, representing the church and the state, has been personified in Beirut by the visiting Metropolitan Hilarion, chairman of the Department of External Church Relations in the Russian Orthodox Church. The church’s “foreign minister” met with a number of state, political and religious officials in the Lebanese capital, bringing with him a number of messages. The most important was Russia’s decision to effectively act as the protector of Christians in the Levant and as their defender and legal representative, perhaps the only real one they have on an international level

In a closed meeting held at Hilarion's Beirut hotel and attended by Al-Monitor, the metropolitan expounded on the reasons and goals of his visit. He began by laying out Russia’s official stance vis-à-vis the Arab Spring. He contended, “It is not a natural process resulting from internal developments that took place in the countries that witnessed its effects. What occurred was more of a foreign plan executed by external factions to control these countries, a plan that began with the Iraq war in 2003.” As a result, “It was not democracy that prevailed in those countries, but utter and total chaos, the price of which was primarily paid by the Christian inhabitants of these countries, who were persecuted, killed and driven out.”

The metropolitan said that according to his church’s information, nine-tenths of Iraq’s Christians were made homeless as a result of the war there. The same type of dispossession also occurred later in Libya, recently in Egypt, and is occurring now in Syria. Wherever opposition militants take control, Hilarion asserted, Christians are forced to either leave or die. It was as if an intersection of interests occurred between the secular administrations of the West and their counterparts in Muslim Gulf states.

Hilarion went on to emphasize that the goals, principles and interests of the Russian Federation are predicated on “the survival of Levantine Christians in their countries, and their peaceful coexistence with their Muslim compatriots, away from external attempts to destabilize those countries.” He further explained that this was of utmost importance to Russia in its capacity as the home to a multitude of Muslim factions as well as to his church, whose territory extends over numerous countries, from Ukraine, Belarus, all the way to Moldova, the Baltic states and Central Asia. The church is present in areas where Christians form the majority, as well as others where they are the minority. Levantine Christians’ successful coexistence with their Muslim countrymen is necessary and of vital importance to nearby Russian church’s subjects, Hilarion said, as well as to the Russian state. While he called on Levantine Christians to remain on the land of their forebears, refrain from emigrating, and maintain their demographic growth and their unity as Christians, he reiterated Moscow’s stance, as state and church, to stand by their side, repeating, “We will not forsake you. You are not alone.” 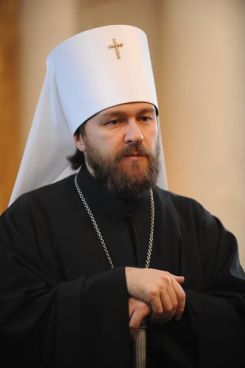 Metropolitan Hilarion (Alfeyev)
Apart from the public rhetoric, other aspects of the bishop of Moscow’s visit to Beirut have elicited observations. One concerns the choice of this particular man for the job. He is a young Orthodox Church official, only 45 years of age, who rose meteorically in the church’s hierarchy within a relatively short period of time. He now occupies the same post previously filled by the current patriarch of Moscow, Kirill I, prior to the latter assuming his current office. Hilarion's age and position will allow him to continue to follow up on his currently assigned dossiers for a long time to come, as well as assure him a promising future within the church’s ranks.

Hilarion’s competency to hold his current job appears beyond reproach. He is fluent in seven languages and knowledgeable about international political matters. He is a charming orator, as well as a capable diplomat, yet, his rhetoric revealed another interesting point — his repeated mention of Vladimir Putin, in every paragraph and attached to every idea, to the point where he seemed to be more of a state official than a church representative. As such, his church responsibilities and his activities in the region were given added breadth.

Another interesting aspect was the bishop’s focus on Christian unity, which translated into a lengthy meeting with the Lebanese Maronite patriarch, head of the largest Rome-affiliated Eastern church. It was also perhaps not a coincidence that Hilarion left Beirut for Rome, where he had an appointment with Pope Francis on Nov. 11. At the meeting with the head of the Catholic Church, the status of Levantine Christians will be at the forefront of discussions, Hilarion said.

It would appear that Moscow, as a state and a church, has the following in mind: Just as the Syrian chemical weapons crisis constituted an opportunity for US-Russian “reconciliation” and paved the way for a strong Russian resurgence on the world stage as a full-fledged decision-making partner, so the issue of Levantine Christians could be an opportunity for Moscow to achieve reconciliation between the Orthodox and Catholic Churches. This would be deemed necessary and vital by Russia in its quest to complement said political resurgence, in the Middle East, Europe and farther afield internationally. In light of the dwindled Christian dimension to Western policies, and as Muslim affairs continue to gain importance in the identities, policies and countries of the Muslim world, a reconciliation between Moscow and the Vatican might be the first opportunity toward the former imposing itself as a Christian equalizer vis-à-vis the Muslim world around the globe.

The Russian state’s agenda might entail a third aspect, for it seems that Moscow is trying to recover the role it played when it was the capital of the Soviet Union. The difference is that during the Kremlin’s communist days, revolutionary Marxism stood at the core of the regime’s ideology, which was reflected in foreign policy rhetoric centered around backing liberation movements, revolution in third world countries, and establishment of a series of international institutions, ranging from the Comintern to global conferences of communist youth. Now that Moscow is Orthodox again, it seems that this religious component has merely replaced communism as the most prevalent aspect at the regime’s ideological core. This is a core whose legitimacy, to be consecrated, requires an external element, the best embodiment of which would be the issue of protecting Christian minorities, in particular, those of the Levant.

Behold, then, the return of the two-headed Russian eagle. And here lies Beirut, the first stop on its flight back. Russian Church sends $1.3 million to Patriarchate of Antioch to help people affected by armed conflict in Syria
The Moscow Patriarchate Department for Church Charity and Social Service transferred $1,320,407 to the bank account of the Patriarchate of Antioch in the beginning of August 2013. The money was collected at the Russian Orthodox churches with the blessing of Patriarch Kirill of Moscow and All Russia to help people affected by the military hostilities in Syria. Patriarch Kirill calls to stop bloodshed in Syria immediately
Speaking at the receipt on the occasion of the feast of Easter, his Holiness Patriarch Kirill of Moscow and all Russia stated that violence of Christians' rights worldwide has become systematic, varying from direct physical violence in Syria and other countries to prohibition of Christian symbols and exclusion of Christian presence to the margins of social life throughout the World.