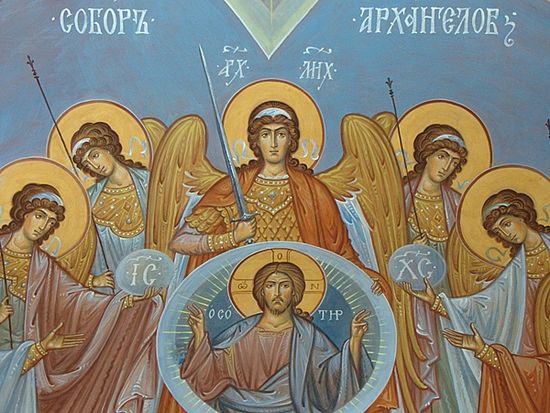 All the Angels, according to the Apostle Paul, are ministering spirits, - sent forth to minister to them who shall be heirs of salvation - (Heb. 1:14). God set them as overseers of every nation and people, and guides to that which is profitable (Deut. 32:8); and while one Angel is appointed to oversee each nation as a whole, one is also appointed to protect each Christian individually. He commands them to guard them that hope on Him, that nothing should harm them, neither should any evil draw nigh to their dwelling (Ps. 90:10-12). In the Heavens they always behold the face of God, sending up to Him the thrice-holy hymn and interceding with Him in our behalf, seeing they rejoice over one sinner that repents (Esaias 6:2-3; Matt. 18:10; Luke 15:7). In a word, they have served God in so many ways for our benefit, that the pages of Holy Scripture are filled with the histories thereof. It is for these reasons that the Orthodox Catholic Church, wisely honouring these divine ministers, our protectors and guardians, celebrates today the present Synaxis that is, our coming together in assembly for their common feast to chant their praises, especially for the Archangels Michael and Gabriel, who are mentioned in the Scriptures by name. The name Michael means "Who is like God?" and Gabriel means "God is mighty." The number of Angels is not defined in the divine Scriptures, where Daniel says that thousands of thousands ministered before Him, and ten thousands of ten thousands attended upon Him -(Dan. 7:10). But all of them are divided into nine orders which are called Thrones, Cherubim, Seraphim, Dominions, Powers, Authorities, Principalities, Archangels, and Angels.

Apolytikion in the Fourth Tone

O Commanders of the Heavenly Host, we the unworthy beseech you, that through your entreaties you will fortify us, guarding us in the shelter of the wings of your ethereal glory, even as we fervently bow before you crying: "Deliver us from all danger, as Commanders of the Powers on high! "

Kontakion in the Second Tone

CHRISTINE JENNY SANDRA9/23/2019 6:16 am
this reading has been a great blessings to me, that i am truly aware, how God has been the greatest benevolence in spirit to guard us when we rely upon HIM and we truly have Angels to guard and guide us according to HIS Holy will, thank you for making me more aware of HIS unceasing Love and Protections throuh HIs Heavenly Hosts..inChrist a sinner Photini
×