Reported from the scene of the event 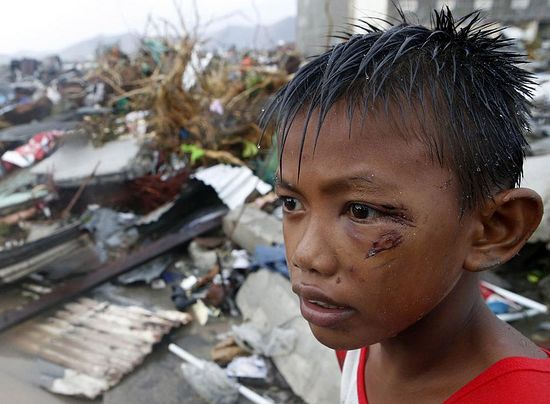 Priest Kirill, who serves in Taiwan, visited the Philippines on a humanitarian mission November 11-13, with the blessing of Mark, Archbishop of Egoriev. Accompanying him was Monk Philipp (Balingit), who organized the visit.

They succeeded in visiting the city of Tacloban, which had been struck by a typhoon. They bought food and medicine, which they then brought in two rented jeeps. In the words of Fr. Kirill, the situation is extremely grave. The whole city of Tacloban was destroyed. Corpses are still lying on the streets. Those who survived have lost everything, while not even food distribution has been arranged, and as a result, the overwhelming majority of survivors have not eaten anything at all for several days now after the typhoon. Starvation threatens them. Nor is medicine distributed — only drinking water, for which huge lines are forming. The stores were looted the very first day. If any people still have anything at all, they are brazenly attacked by gangs, which have become more active. 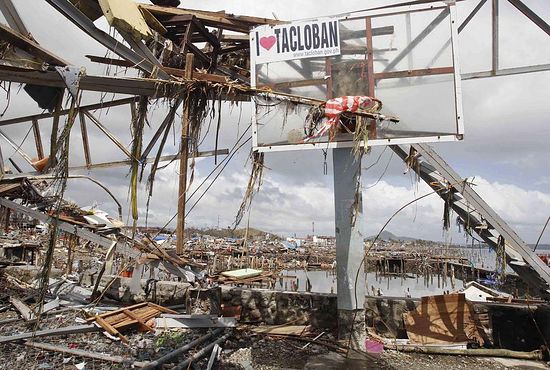 Fr. Kirill witnessed gangsters starting to shoot at a car on the road ahead, but nearby soldiers came and intervened, and after an exchange of fire the gangsters retreated. Everybody is trying to leave the island, as it is very dangerous to stay there, along with the fact that there is virtually no place to live, since the majority of buildings have been completely destroyed. 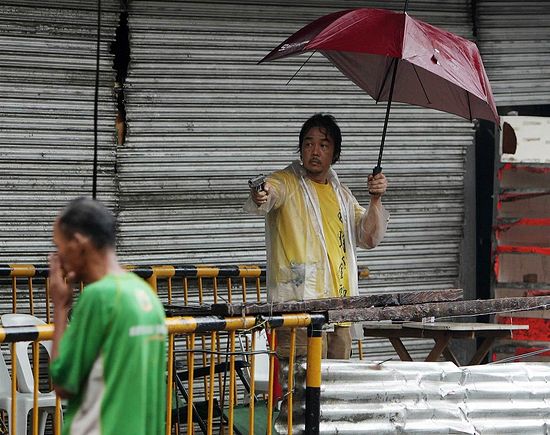 A store owner frightens a marauder away with a pistol. Photo: Francis R. Malasig | EPA

However, it is not easy to leave — it was only the day before yesterday that small planes had begun to fly to Cebu. A huge crowd had accumulated at the airport, waiting for a chance to get off the island. Fr. Kirill talked with one American who had been on the island the whole time. He thinks that even a death toll of 10,000 is a low estimate. He related how he had fallen asleep in the middle of a city full of life, but the next morning, after the typhoon, there was no one left in the neighborhood alive. 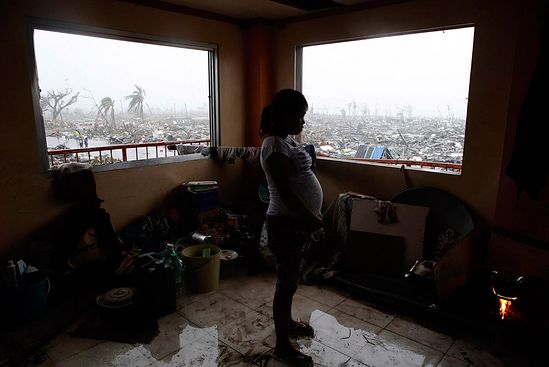 One of the few surviving buildings in the city of Tacloban. There are no more intact buildings visible as far as the eye can see. Photo: Romeo Ranoco | Reuters

Fr. Kirill and Fr. Philipp distributed food (rice) and medicine to the needy in Tacloban, and also small icons for spiritual consolation. They were able to give help to about 300 families in all (of course, this is a drop in the bucket). About 500 kg of rice, 700 [kg] of canned goods, 500 packages of quick-cooking pasta, 700 packages of paracetamol (acetaminophen) and other medicine (for upset stomach, antibiotics, for asthma, vitamins, anti-inflammatory ointments, etc.), 71 pairs of flip-flops (since many people do not have any footwear at all), around 500 small icons, and 20,000 Philippine pesos (50 or 100 pesos to a family) were given out in all.

In the disaster area there is also a small Orthodox community named after St. Nicholas the Serb (Russian Church Abroad). Ten of the local inhabitants converted to Orthodoxy thanks to the preaching of Fr. Philipp, and were baptized in August. According to available information, all ten of them remain alive after the typhoon, but their homes have been destroyed. 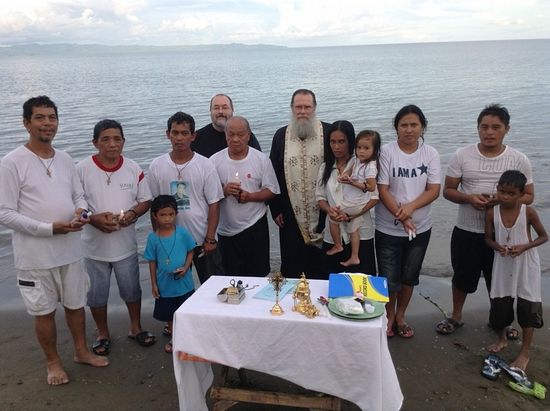 Orthodox community. New converts after their baptism in the ocean. August 2013.

To our great regret, we did not have the opportunity to visit the village where this Orthodox community resides. First, this place is now controlled by gangs. Second, the road has been completely destroyed — to pass is physically impossible. This mountain, which was previously covered with roads and settlements, now looks as if no man had ever set foot on it. The cell phone connection doesn't work, so we couldn't contact any of the local Orthodox people, either.

Recently a wooden chapel was built on the island of Tubabao on the place where the Church of the Holy Mother of God was in the Russian refugee camp (1949-1953) where St. John (Maximovich) served. The island of Tubabao was the first in the path of the typhoon, so apparently the chapel was destroyed. At the present time the possibility of further effective aid to the victims of the typhoon in the Philippines is being explored.

The Orthodox Missionary Society of St. Serapion of Kozheozersk opened a fund (wallet in the Yandex-Dengi system: 41001409981867); the first funds that were collected were directed towards the partial payment of the humanitarian trip on November 11-13.

Three days before that super typhoon struck the Philippines, it was forecasted that three provinces were also to be hit. Either Sorsogon (our place), or Samar or Leyte were the typhoon's targets. But the landfall occurred in between Samar and Leyte, not Sorsogon. It could have been Sorsosgon if it were not for the high pressure in Northern Luzon that pushed the monstrous storm a little downwards. Thus, there are no human injuries and casualties here. But crops, livestock and livelihood here were damaged. Another concern is that the prices of prime commodities automatically soar after every calamity. The problem is that the government will no longer pay attention to us since there are no casualties. Like others, our needs are: food, a small amount as capital for livelihood, vitamins/ medicines, toiletries/ hygiene supplies, school supplies and clothing. Any generous help sent to us will serve as leverage for our immediate recovery.

Our small community of the Holy Martyr St. Eleftherios Orthodox Church here in Gubat, Sorsogon, Philippines is in dire need of things that will not only be good for days or weeks. For, we have been renting a house that serves as our temporary makeshift chapel for seven years now. This is why we are soliciting/requesting help from all concerned faithful Orthodox Christians, organizations or groups, to help us purchase at least a small parcel of land and construct our own permanent Church. We as well need religious items, since most here are merely improvised and crude; and we also need support for the continuance of our weekly radio program THE VOICE OF ORTHODOXY. These basic things will help in propagating our faith in this country where the Orthodox Church is still unknown or unheard of by the majority of people. The field here is ripe and good for harvest. The voice of the True Church must be seen, heard, and felt by my fellow Filipinos in such a time like this. So any amount, thing,means and way sent for us will be of much help and ease on our burden. We are only about a hundred—too few, too far from the main Orthodox countries to get attention. However, we believe that God will touch people to help us. We are small and needy for now; someday, we too can help others. 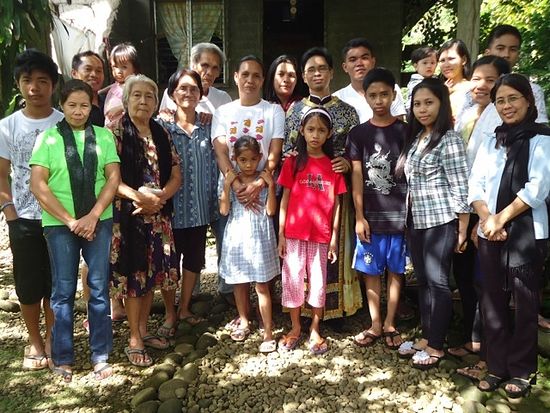 Fr. Chrysostomos Sarmiento and in flock in Sorsogon, the Philippines

Thank you and God bless us all. Kyrie Eleison +++. Synodal Department for Social Ministry rendering aid to typhoon victims in the Philippines
Cebu island is among those regions of the country which suffered most from the typhoon. The north of Cebu island was right on the typhoon’s path.