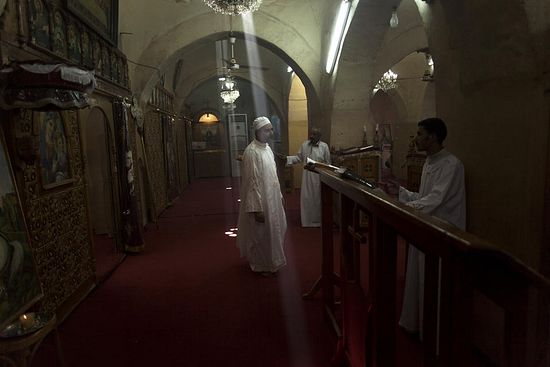 There is no sign of the hundreds of thousands of Christian pilgrims who flock here every November. No tattoo artists inscribing crosses on the wrists of babies or images of saints on the arms of young men. No stalls selling crosses, icons or pillows embroidered with portraits of patriarchs.

The only noise disturbing the quiet of the Monastery of Mar Girgis these days is the call for prayers blaring from the nearby mosque.

The week-long festival of Mar Girgis, or St. George, has been held here annually for more than a century, attracting as many as 2 million pilgrims from across Egypt to one of the biggest and most exuberant events of the year for Orthodox Coptic Christians.

This year, however, the government canceled the festival, fearing it would be a target for Islamic militants who have stepped up attacks since the July 3 ouster of Islamist President Mohammed Morsi.

The cancellation — along with those of two similar festivals the past few months — has fed Christians' fears that they are not benefiting as they had hoped from publicly supporting the military's removal of Morsi. Their worst fear, some say, is the discrimination against them will endure.

Christian activists have been pushing for solid gains after the removal of Islamists from power. They want the revised constitution to clearly state that all Egyptians are equal and to remove draconian restrictions placed on the construction and restoration of churches. They also want an end to the illegal but routine practice of denying Christians top positions in the military, security services, academia and the judiciary. Many seek a set quota for Christians in parliament to ensure a proportionate representation for the community.

So far, however, they appear to have gotten no stronger language in the constitution protecting their rights, as the 50-member panel drawing up amendments to the mainly Islamist-drafted charter passed under Morsi begins to put together a final draft.

"The Copts have paid a high price since Jan. 25 and until now," said Maher Shoukri, a Christian activist, referring to the start of the 2011 uprising that ousted longtime autocrat Hosni Mubarak.

"The Copts must reap the fruits of the revolution and feel the change," said Shoukri, from the Christian-led rights group, the Association of Maspero Youth.

Egypt's Christian minority, about 10 percent of the population of some 90 million, long has complained of discrimination.

The Coptic Orthodox Church, to which most of them belong, has done away with its customary caution about involvement in politics when Pope Tawadros II publicly supported Morsi's ouster. On July 3, the pope stood with Egypt's top Muslim cleric behind military chief Gen. Abdel-Fattah el-Sissi when he announced Morsi's ouster.

Since then, Christians have been hit by a backlash from Islamists. Mobs torched, looted or destroyed at least 40 churches across Egypt. Tawadros has been vilified in graffiti painted over church walls and Christian homes and businesses.

Kidnapping Christians for ransom has seen a dramatic rise in areas south of Cairo, particularly Minya, home to the highest percentage of Christians in any of the nation's 27 provinces. Activists report a rise in Christians leaving the country, and even some churches have advertisements offering help in getting visas abroad.

Now some Christians feel their church was used to give the coup the appearance of inclusiveness. They complain that the new order in Egypt has failed in its first test — protecting Christians — underscored by the cancellation of the Mar Girgis festival.

"Christians are deluding themselves into believing that their safety lies with the military," said Nirvana Mamdouh, a Christian activist.

Another activist, Ebram Louis, noted how authorities quickly repaired Cairo's Rabaah al-Adawiya mosque, which was damaged when security forces violently broke up a pro-Morsi sit-in there in mid-August, killing hundreds of his supporters. In contrast, none of the churches damaged in attacks the same month have been repaired despite promises by the military, he said.

Safwat el-Bayadi, head of the Anglican church in Egypt and one of three Christians on the panel amending the constitution, said, "The only gains we are looking for is equality in the rights and duties for all."

"We do not accept the division of rights according to religious affiliation even if that works for our benefit," he told The Associated Press.

A senior church leader known to be close to Tawadros aired his fears over the future of Christians in post-Morsi Egypt in an interview with the AP. The cleric spoke on condition of anonymity to describe the internal and confidential discussions of the church's leadership.

He complained that nothing has been done to repair damaged churches or to stem rising kidnappings.

"It is time that the issues of the Christians are not diluted or cast aside," he said, adding that the constitution must enshrine a "civil and democratic state and a clear and straight line separating state from religion."

Church leaders say they observed the cancellation of the festival at Mar Girgis to help the military-backed government to restore security. But it fuels Christians' bitter perception that they are pushed to make concessions. For example, Tawadros canceled celebrations marking his enthronement a year ago. Churches across much of the country have canceled social activities for security reasons.

Father Arsenious, head of the Mar Girgis Monastery, said security officials told the church that even if they deployed a large number of police they could not guarantee the festival's safety. "It's better to cancel it this year, rather than allow a tragedy to take place," he said.

The annual pilgrimage to the walled monastery in the deserts of southern Egypt overlooking the Nile, 400 miles (660 kilometers) south of Cairo, is a festival of faith, a time to pay homage to the 3rd century saint who is one of their most revered figures. It is also an opportunity for Christians to celebrate their identity in an atmosphere free from discrimination.

"It is an occasion where Christians feel free and behave without inhibitions," the 64-year-old Arsenious said. "It is like they are exercising all their rituals and chanting their slogans without a worry about the consequences."

During last year's festival, men and women flaunted the cross tattoos on the inside of their wrists, which they normally keep discreet. Men showed off more elaborate tattoos of favorite saints on their arms. Tens of thousands lived in a tent city outside the monastery's walls as hymns blared out of speakers and special envoys from the pope headed ceremonies and Mass.

The monastery put up a notice saying it would be closed to visits during the time of the festival — which was to have begun on Monday — and word spread through churches and social media. Still, a handful of pilgrims showed up at the monastery's imposing iron gates demanding to come in to pray.

Despite the current atmosphere, Arsenious says he's optimistic things will change. He said he dreams of a return to the days of the 1970s, before the rise of Muslim conservatism and Islamic militancy.

"It is unrealistic to expect that people, like in the West, would never ask about one's religion," he said. "But I want to at least comfortably spend a whole day with a Muslim friend without fear that he could turn against me at any moment." Joint Orthodox-Catholic statement on violence against Christians in Middle East
The North American Orthodox Catholic Theological Consultation has issued a joint statement entitled “The Plight of Churches in the Middle East – Revisited.”