The worst Christian massacre—complete with mass graves, tortured-to-death women and children, and destroyed churches—recently took place in Syria, at the hands of the U.S.-supported jihadi “rebels”; and the U.S. government and its “mainstream media” mouthpiece are, as usual, silent (that is, when not actively trying to minimize matters). 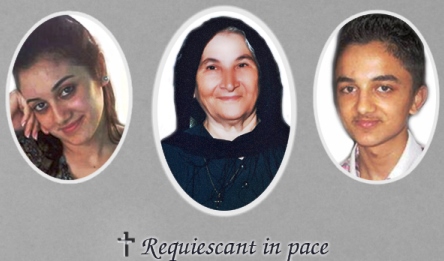 Images of three of the six family members tortured and thrown in a well by U.S.-supported Islamic terrorists.
The massacre took place in Sadad, an ancient Syriac Orthodox Christian habitation, so old as to be mentioned in the Old Testament. Most of the region’s inhabitants are poor, as Sadad is situated in the remote desert between Homs and Damascus (desert regions, till now, apparently the only places Syria’s Christians could feel secure; 600 Christian families had earlier fled there for sanctuary from the jihad, only to be followed by it).

In late October, the U.S-supported “opposition” invaded and occupied Sadad for over a week, till ousted by the nation’s military. Among other atrocities, 45 Christians—including women and children—were killed, several tortured to death; Sadat’s 14 churches, some ancient, were ransacked and destroyed; the bodies of six people from one family, ranging from ages 16 to 90, were found at the bottom of a well (an increasingly common fate for “subhuman” Christians).

The jihadis even made a graphic video (with English subtitles) of those whom they massacred, while shouting Islam’s victory-cry, “Allahu Akbar” (which John McCain equates to a Christian saying “thank God”).  Another video, made after Sadad was liberated shows more graphic atrocities.

Here are the words of Archbishop Selwanos Boutros Alnemeh, Syriac Orthodox Metropolitan of Homs and Hama (another detailed account, with pictures, appears here):

What happened in Sadad is the most serious and biggest massacre of Christians in Syria in the past two years and a half… 45 innocent civilians were martyred for no reason, and among them several women and children, many thrown into mass graves. Other civilians were threatened and terrorized. 30 were wounded and 10 are still missing. For one week, 1,500 families were held as hostages and human shields. Among them children, the elderly, the young, men and women…. All the houses of Sadad were robbed and property looted. The churches are damaged and desecrated, deprived of old books and precious furniture… What happened in Sadad is the largest massacre of Christians in Syria and the second in the Middle East, after the one in the Church of Our Lady of Salvation in Iraq, in 2010.

In the Iraqi attack of 2010, al-Qaeda linked jihadis stormed the church during service killing some 60 Christian worshippers (see here for graphic images of the aftermath). 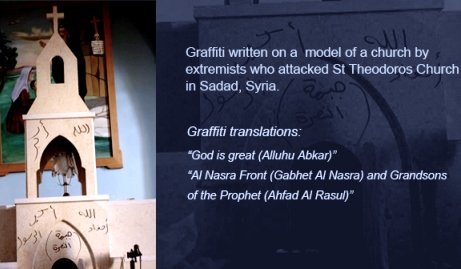 While the archbishop is correct that this is the “largest massacre of Christians in Syria,” it is but the tip of the iceberg of the persecution the nation’s Christian minority has suffered—including beheadings, church bombings, kidnappings, rapes, and dislocation of hundreds of thousands of Christians—since the war broke out (see Syria entries in monthly persecution series).

A month before Sadad, another ancient Christian region, Ma‘loula, one of the world’s very few regions that still spoke Aramaic, the language of Jesus, was besieged by the jihadis, its churches bombarded and plundered, its inhabitants forced to convert to Islam or die. The last words of one man who refused were: “I am a Christian, and if you want to kill me for this, I do not object to it.”

The archbishop concluded his statement concerning Sadad by asking: “We have shouted aid to the world but no one has listened to us. Where is the Christian conscience? Where is human consciousness? Where are my brothers? I think of all those who are suffering today in mourning and discomfort: We ask everyone to pray for us.”

Serge Trifkovic—who hails from a European region especially acquainted with Islamic jihad—responds to the archbishop as follows:

That no “human consciousness” is to be found in the White House, or in the editorial offices of the leading Western media, is now a matter of well-established record. Just try searching for “Sadad” (or alternatively “Saddad”) on the websites of the Department of State or The New York Times. Ditto the leading European dailies, the CNN/BBC/RTF, the human-rights defending “NGOs” et al.

The problem, of which Archbishop Selwanos Boutros Alnemeh appears unaware, is no longer in the Western elite’s mere indifference to the impending demise of Christianity in the lands of its birth, but in its active, ongoing, and open contribution to that demise. Cyprus (1974) and the Balkans (1991-9) provided the test, Iraq (2003-today) the conclusive proof. In Syria the Obama administration remains committed to supporting the rebels—ah, yes, only the “moderate” ones, like the Christian-murdering “Free Syrian Army” (discretion advised again), not “even though” the result will be the same, but precisely because it will be. 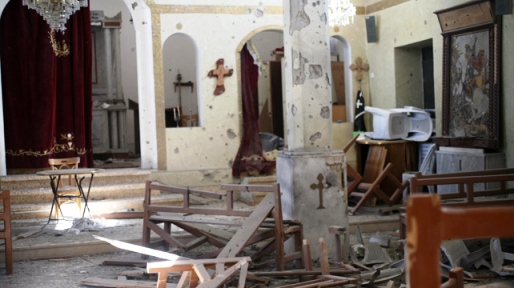 Another of Sadad’s churches, desecrated by jihadis.
In one of the Arabic videos documenting the aftermath of the Sadad massacre, as the mutilated bodies of one family are drawn from a well (around :30 second mark), a middle-aged male relative, in tears, says:

The most precious in the whole universe [his family], are now gone, leaving me alone, but thank God I am still surrounded by these loving people who remain. I want to say, let people [the jihadis] return to their minds. The problems of the world can only be solved by knowledge and brains. Enough insanity, the nerves of the people are shredded. Enough, enough—return to your minds; you people, you humans—return to your humanity, enough crimes.

As a sign of the times, here is a Syrian, an “easterner,” evoking rationalism and humanity, products of Christian civilization, even as the post-Christian West is governed by anything and everything—propaganda, emotionalism, mindless indoctrination—but the twain.

Syria: details of massacre of Christians at Sadad revealed. Bodies of a whole family, including the elderly and teenagers, found inside a well

Syria: details of massacre of Christians at Sadad revealed. Bodies of a whole family, including the elderly and teenagers, found inside a well
The burial of a Christian family, murdered by Muslim extremists, took place on November 4 in the Syrian settlement of Sadad. Mass grave found in freed Christian village in Syria
After the operation that liberated the Christian village of Sadad from the Giish and Jabhat al-Nusra militants, local residents discovered two mass graves that contained about 30 bodies of men, women and children, killed at the hands of the extremists around October 26–28 this year.
Comments

Mohammed10/9/2015 2:49 pm
Islam is the plural of silm, meaning peace. Satan has no religion, all it has is confusion. So logically Islam cannot be from Satan. Mohammed sm cannot be antichrist as he has declared isa alaihissalam is one of my brothers. The writer who has written this comment didn't understand the writing himself or herself and is diverted by some other misconceptions.

christian aware11/25/2013 3:25 am
islam is satan religion and Mohammed is the Antichrist. the god of islam is satan himself. in the Apocalypse is written about the beast and the dragon and the martyrs. and how the "rebels" followers of the dragon put His name on their front: see syrian rebels with the black ruban tied on their head where is written "allah akbar mohammed rasoul allah" it means god is more big and mohammed is the apostle of god!!!! in their coran they blow up all Jesus divinity and mohammed ordered them to kill "al kuffar" means the blasphemers who pretend that Jesus is the son of God.
all christians are "kuffar" and must be killed this is written in " souret at taouba in coran: fight and kill all who do not beleive in god and his apostle and all who do not apply the law put by god and by his apostle,,,,
this is islam and muslims
go to Hayat TV and learn about islam the true satanic religion
with muslims their is no peace
but the big mistake is that churchs tell that islam is a heaven religion and they worship God. it is not true.
islam is a terrorist religion put by mohammed inspired by satan, mohammed was pedophile and necrophile and homosexual and all sexual perverion he made in his life, and most of all he was an assasin and a killer and posessed by satan.
beware of islam