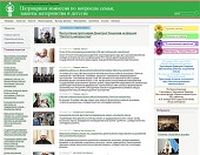 The official portal of the Patriarchal Commission on family matters, protection of motherhood and childhood has appeared in the Internet, reports Patriarchia.ru.

The website http://pk-semya.ru/ contains the following sections: news, the little Church, challenges of the times, events, analytics and others.

- hotlines people can call in various difficult situations in life;

- a database of questions on family themes, answered by competent priests;

- audio and video collections and a library on family problems.

In his video address to the portal's visitors, the chairman of the Patriarchal Commission Archpriest Dimitry Smirnov noted: "I want to congratulate everybody in our native land who is sympathizes with the restoration of a real, full-fledged, Russian family of many children. We are opening a new portal of the Patriarchal Commission on protection of motherhood and childhood. In the modern world it is impossible to promote ideas without modern technologies, and so we, following the spirit of the time, have taken care to create such an instrument".

The video address is accompanied by a visual instruction, which represents the structure, all sections and functions of the website.

The Patriarchal Commission on family matters, protection of motherhood and childhood was formed according to the Holy Synod decision late in 2011 with the object of developing and implementing of the system complex of measures for overcoming the crisis of the family values in the society and for the Church support of the family. Bill that restricts state funding for abortions introduced to Russian State Duma
The bill proposes to put a legislative ban on financing abortions at the expense of budgetary funds, except for abortions for medical reasons and on condition that there is an imminent threat to a woman's life. The Patriarch of Georgia proposes to introduce a new subject in schools: "Fundamentals of family life"