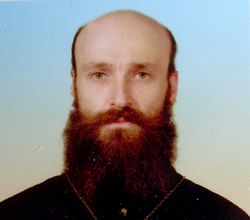 On the night before November 22, 2013, the rector of the Transfiguration Church in the town of Smolyany of the Orsha district of the Vitebsk region of the republic of Belarus, Priest Alexander Morozov, was killed, reports Patriarchia.ru.

Metropolitan Philaret of Minsk and Slutsk, the Patriarchal Exarch of All Belarus, has sent his condolence to Archbishop Dimitry of Vitebsk and Orsha.

The funeral service for murdered Priest Alexander was performed in the Cathedral of the Nativity of the Mother of God in Orsha by Priest Valery Serko, Dean of the first Orsha district's Church district.

At the present time, the inter-district department of the Committee of inquiry is investigating the criminal case.

"The Orthodox priest not long before the incident allowed two young men to live temporarily at his home without payment in connection with their financial difficulties," reported Inna Gorbacheva, official representative of the directorate of the Committee of inquiry in the Vitebsk region, to BelTA. According to her, on the night of November 21, Father Alexander's visitors wounded him mortally with a knife.

Both men have been detained as suspects in the criminal case. It has been ascertained that the suspects were unemployed and had no fixed address. The investigation has proved that they were in a state of acute alcoholic intoxication.

Priest Alexander Morozov was born in 1970 in Orsha. He studied in the Smolensk medical institute and in the Vitebsk theological college. In January 2002 he was ordained a deacon and in September of the same year, a priest. He was awarded with a right of wearing epigonation, kamilavka, and pectoral cross. The priest was married, and had no children. Since 2006, he was rector of the Transfiguration Church in the town of Smolyany of the Orsha district, reports the official website of the Orthodox Church of Belarus. A Priest killed in Tyumen

A Priest killed in Tyumen
On August 15, in the Russian city of Tyumen--the same day that Priest Paul Adelheim from the Diocese of Pskov was murdered--another Priest, Igumen Makary (Loshkarev), reposed in the Lord. Fr. Makary had earlier served in Surgut. Orthodox Priest Killed in Pskov
Investigators have opened a criminal case into the fatal stabbing of a well-known Orthodox Christian priest after his body was discovered in the northwestern city of Pskov.
×