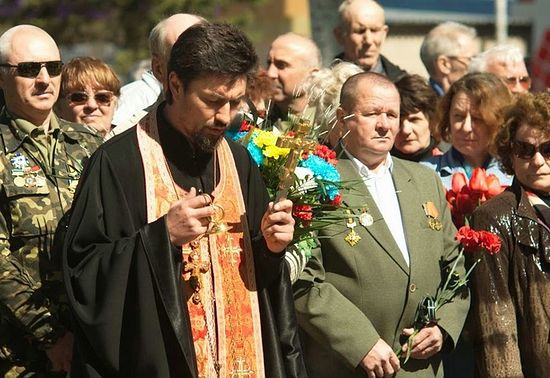 A priest has been shot dead in the Donetsk region of the Ukraine. This fact has been confirmed by the Ukrainian Orthodox Church of the Moscow Patriarchate, reports RT.

A representative of the Ukrainian Orthodox Church has explained that there is only a confirmation of killing of the priest for now, but it is not clear at which roadblock the incident happened, reports Interfax. The name of the killed priest was Fr. Paul, specifies the agency's interlocutor.

Earlier local online editions and Orthodox activists reported that the Priest of the Ukrainian Orthodox Church of the Moscow Patriarchate Paul Zhuchenko had been killed near one roadblock in the Donetsk region.

The 40-year-old Fr. Paul Zhuchenko was shot dead as he was driving his vehicle on the highway between the towns of Druzhkivka and Kostiantinivka in the night from Thursday to Friday, reports Pravoslavie v Ukraine. Believers burnt alive in Donetsk airport
Orthodox believers suffered from the attacks of Ukrainian militants against the International Airport in Donetsk on May 28.

Tina McCluskie4/13/2016 9:29 pm
I have had several dreams of persecution towards Christians even to the death. I my self was hiding, running to stay alive while husband and I were preaching the gospel of the Lord Jesus Christ right here in the United States of America. I believe it will be this way soon like we see and read about now in other countries. We need as Christian's to wakeup even more here than anywhere. Are you willing to die for your faith if you had to?
×