Different faiths come together in support of the Jordan River

Senior clerics from the Christian, Muslim, and Jewish religions sign treaty calling upon the Israeli, Jordanian and Palestinian governments to expedite the rehabilitation of the Jordan River. 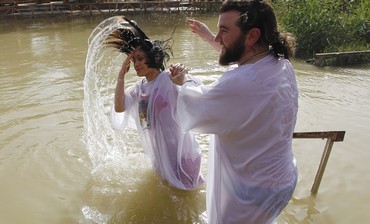 A christian pilgrim emerges from the water during a baptism ceremony in the Jordan River.
With the aim of reviving a natural water source that is a key historical component to the three monotheistic faiths, senior clerics from the Jewish, Christian and Muslim religions signed a treaty last week calling upon the Israeli, Jordanian and Palestinian governments to expedite the rehabilitation of the Jordan River.

The religious leaders endorsed a “Covenant for the Jordan River” asking that the regional governments work together toward rehabilitation, at a region-wide conference held early last week in Jordan, on the northern shore of the Dead Sea. Organized by EcoPeace –Friends of the Earth Middle East, the gathering aimed to bring together representatives from all the religions who consider the river holy, and discuss how the once lush wetland ecosystem of the Lower Jordan River could overcome the demise that it has faced over the past several decades.

“If we claim to love the land, then surely we shouldn’t treat it in a manner that leads to its devastation,” Rabbi David Rosen, honorary adviser on interfaith relations to the Chief Rabbinate, said at the conference.

“We have an obligation to work together for the cause of rehabilitating the River Jordan.”

The diversion of 96 percent of the river’s waters for domestic and agricultural uses has left the once flowing source with little fresh water, which has also become rife with sewage and agricultural runoff, according to Friends of the Earth.

“The river runs through the heart of our spiritual traditions: Some of the founding stories of Judaism, Christianity and Islam are set along its banks, and the valley contains sites sacred to half of humanity,” the covenant says. “By any measure, this landscape must be counted as part of the heritage of humankind.”

The continued infiltration of pollutants into the water source – what the covenant calls “the demise of the Jordan” – indicates “a failure of our most basic responsibility towards the species whose habitats have been destroyed and the ecological systems that sustain life of earth,” the signatories agree.

Acknowledging that realizing a once again flourishing Jordan River will be a difficult task, the covenant ultimately calls upon the region’s governments “to make a serious commitment of resources and political capital” to the rehabilitation.

“A quiet revolution is taking place,” said Rabbi Awraham Soetendorp, president and founder of the Jacob Soetendorp Institute for Human Values in The Hague. “This is the first time in history that we are speaking in one voice towards the River Jordan.”

Attallah Hanna, an archbishop for the Roman Orthodox Church, added that it is no less than their “duty as believers to maintain the environment.”

Meanwhile, Dr. Sabri Mofti of the organization Al- Quds and the Holy Land emphasized how the Koran teaches that “water is the source of all creation,” and that the resource is something to be wasted and kept pollutant-free for everyone.

Following up on the covenant signed in Jordan, Friends of the Earth later last week held the organization’s annual Good Water Neighbors conference in Herzliya, during which 300 Israelis, Palestinians and Jordanians gathered to discuss the region’s most pressing water issues – including the rehabilitation of the Jordan River.

For Israel’s part, water from Lake Kinneret (the Sea of Galilee) began to flow into the Jordan River in May, signaling the onset of a comprehensive government plan to rehabilitate the river. The project began by discharging approximately 1,000 cubic meters of water per hour, with the goal of eventually replenishing the Jordan with up to 30 million cu.m. annually.

At the same time as the water continues to flow, the Water Authority is overseeing the treatment of sewage and brackish water that is being removed from the riverbed.

While Friends of the Earth has praised these efforts on the part of the Israeli government, the organization maintains that Israel should be providing at least 220 million cu.m. of water to the river annually, while Jordan should be responsible for 90 million cu.m. and Syria for 100 million cu.m.

On the Jordanian side of the river, a new sewage treatment plant has recently begun operating, Gidon Bromberg, Israel director for Friends of the Earth Middle East, told The Jerusalem Post on Wednesday. From the Syrian side, Bromberg said that his Jordanian colleagues have informed him they are pumping much less water from the Yarmulk River lately, since so many of the area’s farmers have had to flee during the ongoing civil strife. It remains unclear, however, if the extra flow from the Yarmulk has begun to reach the Jordan River.

At the Good Water Neighbors conference, Saad Abu Hammour, secretary-general of the Jordan Valley Authority, publicly declared his country’s commitment to the Jordan River’s rehabilitation. This is the third time in the past year that Hammour has spoken at water conventions held in Israel.

A Friends of the Earth study on the regional economic benefits of rehabilitating the Lower Jordan River analyzes how the rehabilitation can put a jumpstart on religious tourism. While the riparian countries of the river all have a range of plans for development and rehabilitation of the river, the December 2012 study argues that “there is little coordination between the three governments.” In addition, the Lower Jordan is under the military control of Israel and Jordan, and thereby allows only limited access to people, the authors argue.

After receiving their results – from 485 Israelis, 279 Jordanians and 374 Palestinians – the authors used several different models to calculate costs and benefits for each scenario. The researchers found that the costs and benefits were roughly equal for Scenarios One and Four, but in Scenario Two, the benefits far exceeded the cost, at $74 million versus $50m. In Scenario Three, the costs far exceeded the benefits at $151m. vs. $83m., the study says.

All in all, the authors concluded “the benefits from rehabilitation of the Lower Jordan River are substantial,” and that good quality water should be selected for the process, regardless of the flow rate.

In addition to performing the cost-benefit analysis, the researchers identified specific sites and activities that could directly benefit from improved water quality and flow in the Jordan River through increased tourism.

Among these opportunities are the West Bank Baptism Site, the archeological ruins of Fasayil, ecotourism at the Karameh Dam, tourism development near Sweimeh in the river’s south, ecotourism along the Israeli-Jordanian border at Peace Island, and the development of more river boating and rafting activities.

All of these cases demonstrate significant potential for economic profitability, the authors argue. Potential local visits to these sites represent great economic benefit for the rehabilitation of the Jordan; with the addition of international tourism prospects, the possibilities will be “unlimited,” Bromberg told the Post.

“The economic potential of the rehabilitation of the Jordan River is really only fulfilled when cooperation is at the core,” he added.

This idea, he stressed, was one of the key issued discussed at last week’s conferences held in both Jordan and Israel.

“There was great significance in the convening together, in one location, on the shores of the Dead Sea near the Jordan River,” Bromberg said. “There’s a statement of solidarity around the Jordan River. That’s unique.”

The archbishops, imams and rabbis from the region and around the world who came together to sign the convention demonstrated that “this is one status quo issue that the three Abrahamic faiths can agree upon,” according to Bromberg.

Because the covenant is still open to receiving more signatures, Bromberg said he and his colleagues have not yet sent the document to Jordan’s King Abdullah II, Prime Minister Binyamin Netanyahu and PA President Mahmoud Abbas – but that they will do so in the near future.

“The event itself, the convening was an act of solidarity that was unprecedented,” he said. “What we expect from the next steps is the outreach – the ability of these faith-based leaders to mobilize their respective communities.

“We’re really excited about the potential of presentations, of sermons that will deal with the Jordan River in their respective synagogues, churches and mosques.” The Jordan Reversed Its Flow!
This miraculous occurrence lasted as long as the two Crosses remained in the river. Right after the Crosses were taken out, the Jordan started reverting to its original course (to the right) until the change was complete. Ecology, Theophany, and Economics
The vision given to us in Theophany is something else entirely. Through his baptism, Christ sanctifies the waters so that we might be sanctified by the waters of baptism. Water becomes a means by which humanity is perfected and the world as a whole reflects the glory of God to a greater degree.
Comments
×