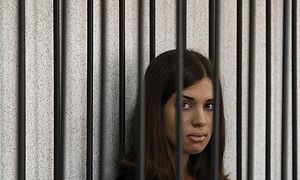 In letters exchanged from a Russian prison hospital in Siberia, Nadezhda Tolokonnikova discusses the ailments of global capitalism with famed cultural critic and philosopher, Slavoj Zizek. Tolokonnikova is serving a two year sentence for her role in the March 2012 Pussy Riot performance at the Cathedral of Christ the Savior in Moscow, where the group protested support for Vladimir Putin’s reelection by Orthodox leaders. To Western eyes, the letters are almost surreal—like something from an age (happily) gone by. Yet for all their romantic appeal, the letters lack the substance of their Stalin-era predecessors.

Both committed communists, Tolokonnikova and Zizek focus mainly on the role of global capitalism in creating the “society of risk” that precipitated the 2008 financial collapse, and which, they agree, persists in Russia’s “seized up” and “feudal” political society under Putin. Also mixed with their economic critiques is a broader reaction to traditional social norms, lumped unhelpfully into discussions of “oppression,” “violation of rights,” and the “middle ages.”

It’s clear that the exchange—organized and published by Philosophie magazine—is something of a popularity stunt. The same is true for Pussy Riot’s raison d’être. Yet ironically, each displays elements of the undiscerning egoism that is most heavily criticized in the “global capitalist system.” Indeed, while it’s easy to agree that instrumentalizing citizens in the name of avaricious gain is wrong, it should also be apparent that economic recklessness and traditional moral values are not two sides of the same coin.

At one point, Zizek remarks:

The Pussy Riot performances cannot be reduced just to subversive provocations. Beneath the dynamics of their acts, there is the inner stability of a firm ethico-political attitude. In some deeper sense, it is today’s society that is caught in a crazy capitalist dynamic with no inner sense and measure, and it is Pussy Riot that de facto provides a stable ethico-political point. The very existence of Pussy Riot tells thousands that opportunist cynicism is not the only option, that we are not totally disoriented, that there still is a common cause worth fighting for.

While I can agree with the idea that our society (both generally and locally) is “caught in a crazy capitalist dynamic with no sense of inner measure,” I find it impossible to grasp how “it is Pussy Riot that de facto provides a stable ethico-political point.” Contrary to Zizek’s claim, the existence of Pussy Riot does not convey an alternative to “opportunist cynicism;” it rather confirms it in the “common cause” of emotivist reactions. The stunt at Christ the Savior is a fantastic example: to critique the clergy is sometimes not unwarranted, but to trample on the sacred spaces of the people is always and everywhere a non-cognitive reaction rather than a considered and “stable” plan of action. (If those spaces have already been desacralized, then different rules would apply.) Also to the point, Tolokonnikova’s recommendation to boycott the 2014 Sochi Winter Olympics resounds heavily with Pussy Riot’s central focus on gender-driven issues. If “opportunist cynicism” concealed as a “common cause” exists anywhere, it exists here.

Of course, silver linings can be found. Zizek—falsely attributing its revelation to Pussy Riot’s antics—comments on a “hidden continuity between Stalinism and contemporary global capitalism.” But whatever connection lurks beneath the surface is quickly outdone by his comparisons of Pussy Riot to Napoleon vis-à-vis Hegel’s vision of the World Spirit. (“In the same way that Hegel, after seeing Napoleon riding through Jena, wrote that it was as if he saw the World Spirit riding on a horse, you are nothing less than the critical awareness of us all, sitting in prison.”) It’s also unlikely that much substantial analysis of this theory could arise from a group whose identity hinges on “criticism, creativity and co-creation, experimentation and constantly provocative events,” and whose persona is depicted by Tolokonnikova in Nietzschean terms of “the children of Dionysus, sailing in a barrel and not recognising any authority.” 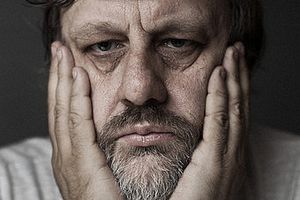 In any event, the brand of liberation proffered by Zizek and Tolokonnikova is materialist at best. That is to say, while areas for legitimate critique seem to arise (or at least to become discernible from afar), the suggested response remains reactive, emotive, and deeply unintellectual.

Contrast this correspondence from Siberia with another’s, whose similar circumstances and suffering provoked not the battle cry fortes fortuna adiuvat, but the sobering, simple truth that “Men have forgotten God.” Aleksandr Solzhenitsyn, whose work might easily have been to reclaim communist ideals from the clutches of Stalin, took instead the path of greater reflection. His critique of capitalist culture at Harvard in 1978 was nevertheless scathing:

The Western way of life is less and less likely to become the leading model.

There are telltale symptoms by which history gives warning to a threatened or perishing society. Such are, for instance, a decline of the arts or a lack of great statesmen. Indeed, sometimes the warnings are quite explicit and concrete. The center of your democracy and of your culture is left without electric power for a few hours only, and all of a sudden crowds of American citizens start looting and creating havoc. The smooth surface film must be very thin, then, the social system quite unstable and unhealthy.

While a measure of Tolokonnikova’s frustration is understandable (Russian prison life is even nowadays probably a terrible thing), Zizek’s provocation stands sharply against the more receptive wisdom of Solzhenitsyn. Rather than aiming to provide helpful, “friendly” advice, Zizek’s is an inherently hostile worldview:

For me, the true task of radical emancipatory movements is not just to shake things out of their complacent inertia, but to change the very co-ordinates of social reality so that, when things return to normal, there will be a new, more satisfying, “apollonian statics.”

In one respect, Zizek’s encouragements point to the mundane heroism exhibited by Solzhenitsyn’s memorable protagonists from In the First Circle. Signing off from his letter on April 4th, 2013, he writes to Nadezhda:

Please, if you can and want, do let me know about your situation in prison: about your daily rhythm, about the little private rituals that make it easier to survive, about how much time you have to read and write, about how other prisoners and guards treat you, about your contact with your child … true heroism resides in these seemingly small ways of organising one’s life in order to survive in crazy times without losing dignity.

Such “private rituals” and delicate human contact appear greatly at odds with the ploys of Pussy Riot, which landed Tolokonnikova in prison in the first place. Yet apart from such honest attempts to connect personally, the Philosophie exchange is devoid of anything resembling the sting of Solzhenitsyn’s transcendent medicine, or even a convincing description of the wound it is designed to heal.