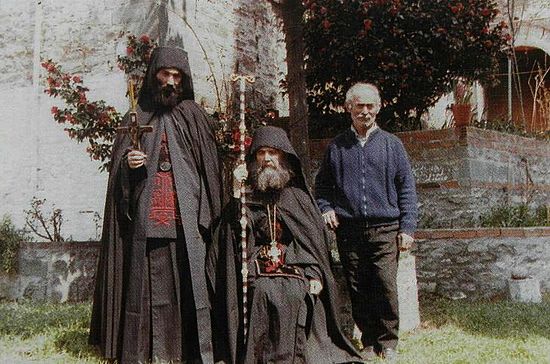 Extensive material damage has been done to the famous cell of St. Artemios (in Provata), attached to the Great Lavra Monastery. In spite of prompt assistance of firemen and brethren from neighboring monasteries (Karakallou, Philotheou, and Great Lavra), according to preliminary information, living quarters and utility structures have burned down, reports AgionOros.ru.

The fire was probably caused by malfunction of furnace equipment.

The cell of St. Artemios is situated in the ascetic settlement of Provata, which is situated between the Karakallou Monastery and the locality of Morphonou, at the height of 80 to 100 meter above sea level.

Since 1772, Provada has been known as the Great Provada Skete. During that period it had 36 cells.

The cell of St. Artemios was founded in the 14th century by Monks of the Great Lavra. In 1863 it was handed over to Russian monks who lived there until as late as 1967. The cell was bought from two elderly monks by elder Ephraim (Moraitis). The fame of this ascetic spread quickly and the number of his brothers increased to 24 people. In 1973, Fr. Ephraim moved together with his disciples to the Philotheou Monastery. He left several monks in St. Artemios cell.

In 1977, the cell of St. Artemios burned down. Only ruins have remained of most of the buildings. The restoration of the monastery began in 1987, when Fr. Euphemius, the closest companion of elder Ephraim, was appointed its Abbot.

During the fire, the elder of the cell, Fr. Ephraim, was away from Mount Athos. Thorhild church destroyed by fire
Fire broke out at the Ukrainian Orthodox Church of Sts. Peter & Paul in Thorhild just before noon Saturday. Fire at New Valamo Monastery
A fire has broken out in the main building of the orthodox New Valamo Monastery at Hein&#228;vesi in eastern Finland. Fire fighters have ruled out arson. A monastery official says no one has been hurt in the blaze and no valuable items have been destroyed.
×