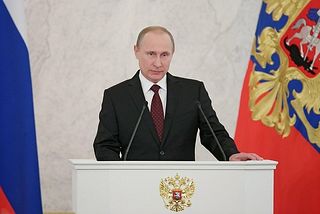 In his address Vladimir Putin has particularly stressed that Russia will continue to defend traditional values:

"Today in many countries the norms of morality are being revised, national traditions and differences between nations and cultures are being obliterated. Now not only conscious acknowledgement of everybody's right to freedom of conscience, political views, and private life is required from society, but also compulsory recognition of equality (though this may seem very strange) between good and evil—two opposing concepts.

This destruction of traditional values "from above" not only leads to negative consequences for societies, but it is also completely anti-democratic, as it is carried out on the basis of abstract ideas, in defiance of the will of the national majority, which does not accept the ongoing change and suggested revision.

And we know that there are more and more people in the world, who support our stance on the protection of traditional values, which over thousands of years have been the spiritual and moral foundations of our civilization, of all peoples: traditional family values, genuine human life, including religious life—not only material, but also spiritual life, values of humanism and diversity of the world.

Over recent years we have seen that attempts to impose a supposedly more progressive model of development on other countries have in fact turned into regression, barbarity, and great bloodshed". Old foes Russia and Poland unite against EU 'ideology'
Leaders of the Polish Catholic and Russian Orthodox Churches have issued an unprecedented joint plea to European Christians to defend their traditional values and Christian roots. Why conservative americans admire Putin
If you still do not understand why American Christians admire Putin then see the video below that my US Marine friend made with my help.
×