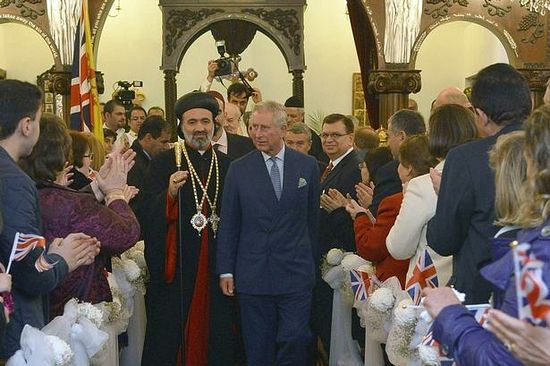 Last week, the Prince of Wales was joined by Prince Ghazi of Jordan on a visit to the Egyptian Coptic church in Stevenage and the Syriac Orthodox Cathedral in west London, where he heard from a number of Christian families who have had first-hand experience of the rising tide of persecution. "We cannot ignore the fact that Christians in the Middle East are, increasingly, being deliberately attacked by fundamentalist Islamist militants," he said. "The Arab spring [is] rapidly turning into a Christian winter" was how the author William Dalrymple put it on the BBC last week.

Clearly, this is a sensitive subject. The perceived support that Christians have allegedly given to President Assad in Syria and to the Egyptian army in deposing President Morsi in Egypt has made them increasingly the target of violence, with churches assaulted, priests abducted, individuals targeted and homes looted. In Egypt alone, Amnesty International has reported that during this past year 207 churches have been attacked and 43 Orthodox churches totally destroyed. And the situation of Christians in Syria is deteriorating rapidly as the Free Syrian Army has become increasingly influenced by foreign jihadist militants. Many thousands of Syrian Christians are now fleeing over the border to Turkey. One man who made the journey from Syria claimed: "Where we live, 10 churches have been burned down. They started to threaten Christians in the town we live. When the local priest was executed, we decided to leave."

All this is a part of a wider picture in which Christians are being increasingly forced out of the biblical homelands. Indeed, across a vast swath of the world between Morocco and Pakistan, the persecution of Christians continues to gather pace, frequently with barely a eyebrow raised in the secular west. Perhaps this is beginning to change. Last month Baroness Warsi warned that "A mass exodus is taking place, on a biblical scale. In some places, there is a real danger that Christianity will become extinct." And on Saturday, the shadow foreign secretary,Douglas Alexander, spoke up against the "political correctness, or some sense of embarrassment at 'doing God'" that makes this a taboo subject.

This reluctance to speak out is partly generated by a peculiar sense that there is some hierarchy of victimhood, with Christians less deserving of concern. And, no doubt, the historical association of Christianity with persecution of other beliefs – the crusades, the inquisition and so on – is also working away somewhere in the background, as is the idea that Christianity is essentially a western faith. This links to the worry that supporting persecuted Christians is somehow taking sides in a clash of civilisations. This thought looks especially foolish when written down; which is precisely why it is worth stating so baldly.

One does not have to "do God" in order to recognise that protecting the rights of religious minorities, as enshrined in article 18 of the Universal Declaration of Human Rights, is the human rights equivalent of the canary in a coalmine. It doesn't help that some evangelical Christians, not least the former archbishop of Canterbury Lord Carey, take every opportunity to speak of Christians being persecuted for their faith in Britain. This is nonsense. And offensive nonsense to those millions who genuinely are victims. Douglas Alexander was right: "Across the world, there will be Christians this week for whom attending a church service this Christmas is not an act of faithful witness, but an act of life-risking bravery."

Of course, it's not just in the Middle East that Christians are targeted. And other religious groups are also clearly subject to persecution. But as billions of Christians gather for Christmas, with their attention focused on a troubled town in the West Bank – one from which Christians have also been fleeing for several years – it is worth recalling that the message of peace and goodwill is hardly a political reality for a significant minority of the world's Christians. This should concern religious and non-religious alike. Prince Charles speaks up for persecuted Christians
Dubbed by the media as an “Arab Spring” or “Arab Awakening,” these events in the Middle East must be reexamined, as they more closely represent a “Tragedy for Minorities” rather than the democratic rebirth that the former names seem to describe.
Comments
×