Living in the Spirit. Sermon on the feast of St. Hilarion in Sretensky Monastery.

On December 28, 2013, on the feast day of Holy Hieromartyr Hilarion (Troitsky), Archbishop of Verea, His Holiness Patriarch Kirill of Moscow and All Russia served the Liturgy in Stretensky Monastery, Moscow. At the end of the service, His Holiness gave a sermon to the faithful. 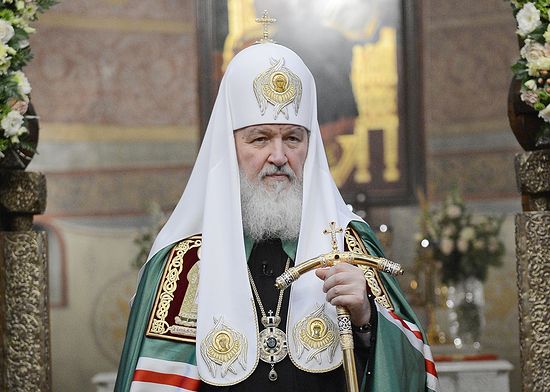 Today we are celebrating the memory of the holy hierarch Hilarion, Archbishop of Verea, a man who entered into the history of our Church in a particular way. It is remarkable that the Epistle reading for today just happens to be to the Galatians, in which the apostle says some amazing words. We all know them practically by heart—in any case, many would be able to paraphrase these words—but we rarely think about their depth. These are the words: If we live in the Spirit, let us also walk in the Spirit (Gal. 5:25). Not only laypeople, but very often the clergy, even after preparing to give a sermon, pass over this sentence; their reasoning is not pricked by what the apostle says. In fact, this is not a common phrase in any way—the apostle is talking about something very essential and fundamentally important for all people.

This is already understandable to many. When people recognize their responsibility to the company where they work, and most importantly to its owner who hired them, they will definitely listen to their director, whatever he is called, and fulfill his instructions. There is nothing amazing about this; if someone violates his superior’s instructions or will, he is fired from the corporation. All of us have the same Superior, the same Master, the same Creator—our Lord and God, who through the power of the Holy Spirit created the world and each one of us. And the apostle reveals to us a great divine mystery: we all live in the spirit because we all come from the Spirit; and we must walk in the spirit, observe the ethics of human common life, this enormous human “corporation”, the past of which goes deep into the ages—and we do not know how much longer mankind has to live. Therefore, the only correct law of life is life in the spirit, and no other law can assume authority over this law.

Just recently I had the opportunity to converse with some people and explain the Church’s position on surrogate motherhood. These good ladies asked me, “If a person cannot have a child, why shouldn’t he use the services of a surrogate mother?” I answered, “We must not go against God’s law.” In every generation, arguments arise, upon which people base their rejection of one or another Divine law. This resistance against God’s will can be found throughout the course of all human history, and is clearly reflected in the Old Testament in the example of God’s chosen people. Sacred history teaches us that when we reject Divine law, when we reject the order of life instituted by God, we are going against God, and we become miserable. All the sufferings of the Jewish people in ancient times were directly linked with their refusal to obey Divine will, Divine law. These are episodes of opposing the Divine order of the world and God’s punishment that followed, which was not so much an expression of Divine power as it was of Divine justice, because Divine law is absolute, and in it is the fullness of wisdom and mercy. This is why the apostle says: If you live in the spirit you must walk in the spirit—in accordance with God’s law, which comes down to us from the time of Moses and the time of our Lord Jesus Christ, and which is fixed in writing and reflected in our hearts by the voice of our conscience.

But behavior according to this law is often misunderstood by people, just as most probably was the behavior of the brilliant theologian and remarkable ecclesiastical writer, Archimandrite Hilarion (Troitsky), who was respected as a great intellectual and converser with the most enlightened people. Then the revolution happened, the era of our country’s collapse, the civil war. Executions, destruction of anyone who got in the way, cruel violence, the demolition of churches, a sea of blood; and this is not even to mention the articles in the press, the mockery of the Church, the frenzied propaganda against God and against the Russian Church. In that very time, Archimandrite Hilarion humbly bowed his head before Patriarch Tikhon and received consecration as a bishop, which at that time basically meant signing one’s own death sentence, especially for those who were distinguished, convincing, influential, and able to respond to the attacks that were raining down on the Church. St. Hilarion was just such a person—standing beside Patriarch Tikhon, supporting his hands, in humility and simplicity of heart helping the Patriarch to carry the cross of his service, and taking upon himself the blows aimed at the Patriarch.

We know that St. Hilarion did not escape his tragic lot—he was innocently imprisoned and sent to the camps, lived through the terrible Solovki camp and other places of imprisonment. And no one raised his voice to defend him; to the contrary, everything that influences people’s awareness was directed at blackening those like St. Hilarion, so that they would not only perish physically, but that even the memory of them would be destroyed, and their names would be mixed forever with dirt. And probably none of those who lifted their hands against St. Hilarion could ever imagine that the time would come when here, in this monastery, which is so closely bound up with him, we would be pronouncing these words, and calling upon his holy name to help us all on this day of his commemoration.

St. Hilarion lived in the spirit—not according to the human state of affairs, not according to what is called common sense. What common sense could ever dictate such behavior in a person? He should have stayed far away from Patriarch Tikhon, kept a low profile, talked less, sought good relations with the current regime, as the renovationists did. There is much that he could have done—but that would not have been life in the spirit, life according to God’s righteousness.

The example of Holy Hieromartyr Hilarion’s, present here in this church through his healing relics, helps us to understand the apostle’s words: if you live in the spirit, you should walk in the spirit. Let the example of St. Hilarion help all of us, primarily those who serve the Church. May God grant that his remarkable martyric image be reflected in the hearts of our hierarchs and priests, as well as in our pious people. May we, beholding this image, be convinced over and over again of the power of God’s truth, so wonderfully expressed on the pages of the Bible. When a person abides with God, he becomes invincible; truth is on his side, regardless of how he ends the days of his earthly life. Truth is with him, because although he was slandered in this life he is become holy before God; and this means he is also holy in human history. Through the prayers of St. Hilarion may the Lord strengthen us and help us, the people of the twenty-first century, to live and walk in the spirit of God. Amen.

The Life of Holy Hieromartyr Hilarion (Troitsky), Archbishop of Verey
Metropolitan John (Snychev) of St. Petersburg and Ladoga (†1995)
One of the most eminent figures of the Russian Orthodox Church in the 1920s was Archbishop Hilarion of Verey, an outstanding theologian and extremely talented individual. Throughout his life he burned with great love for the Church of Christ, right up to his martyric death for her sake. His literary works are distinguished by their strictly ecclesiastical content and his tireless struggle against scholasticism, specifically Latinism, which had been influencing the Russian Church from the time of Metropolitan Peter Moghila [of Kiev]. Service to Holy Hieromartyr Hilarion (Troitsky) of Verey
Commemorated April 27/May 10 and December 15/28
All thy hope didst thou set on God, following His divine will; and in time of persecution thou didst take up the archpastoral staff as a cross, preparing thyself for martyrdom for the sake of Christ. Him didst thou confess before thy tormenters, enduring sufferings. And standing now before Christ, O Hilarion, thou dost rejoice with the holy Patriarch Tikhon. O Hilarion, most honored master, thy life was truly lived in accordance with thy name; for, having the serenity of prayer within thee, thou didst make manifest the joy of Pascha unto all. Wayne, WV: "Today the Sretensky Monastery Rejoiceth..:" The First Celebration of the English Service to St. Hilarion of Verey in Holy Cross Monastery

Wayne, WV: "Today the Sretensky Monastery Rejoiceth..:" The First Celebration of the English Service to St. Hilarion of Verey in Holy Cross Monastery
"Here at the monastery, we are often tempted to complain about conditions not being exactly what we want them to be," explains Fr. Alexander. "It’s very easy for us to think that, in order for us to be saved, in order for us to have a successful monastic or spiritual life, or Christian life in general, we need the right conditions to live in, the right church to pray in, the right financial stability, the right order to our lives and our prayer. However, oftentimes these conditions are not present, much like today when we as Orthodox Christians are a minority in America. Reverend Hilarion Troitsky
In the morning the sun chased away the mists shrouding the beach. And at that point everyone saw the boat returning… It contained not four but nine people. And then everyone gathered on the quay, — monks, prisoners, guards, — all crossed themselves and went down on their knees. “A Miracle, indeed! The Lord has saved them!” came cries from the crowd.

Saint Hilarion (Troitsky). The Unity of the Church and the World Conference of Christian Communities
This brilliant defense of traditional Orthodox ecclesiology by the Holy New-Martyr Archbishop Hilarion — who received a martyr's crown on December 15th, 1929 —, does not seem to be well known, probably owing to its limited publication decades ago by a small monastery press in Canada.
Comments
×