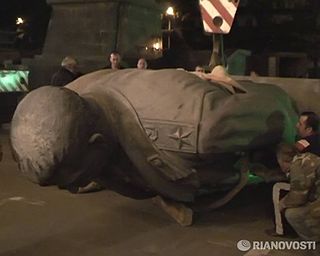 A monument to Joseph Stalin in the Georgian town of Telavi was dismantled on Monday in accordance with the local administration's decision, reports RIA Novosti.

The monument was erected in September with the participation of the Union of Veterans and the "Stalinist" international organization near the memorial to the soldiers, fallen in the Second World War. Not long afterward, unidentified people smeared red paint all over the monument.

The local administration states that the monument was set up illegally and no permit was granted for setting up such a monument. Soon the authorities announced a bid for its dismantlement and it was won by "The civil development foundation". 650 Lari (about 380 USD) were appropriated for abolition of the monument from the local budget.

In his turn, the leader of the "Stalinist" public organization Shota Lazareashvili has referred to the dismantling as "vandalism".

Communists roast in hell in Montenegro fresco
Look up at the wall and you can see Yugoslavia's late autocratic leader Josip Broz Tito drowning in red fiery waves of hell - along with Karl Marx and Friedrich Engels, authors of the 1848 Communist Manifesto.

Russian Church calls for condemnation of Stalin, Lenin crimes
A remembrance service for victims of Soviet-era repressions was held by the Solovetsky Stone on Moscow Lubyanskaya Square on Monday.
×