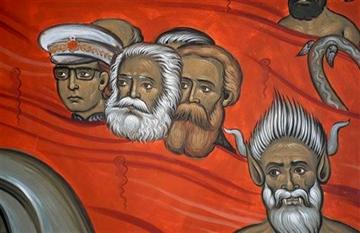 (AP Photo/Risto Bozovic). This photo taken Tuesday, Feb. 4, 2014 shows the brightly-colored newly painted fresco in the Serbian Orthodox Church of Christ's Resurrection in Montenegro's capital Podgorica.
Look up at the wall and you can see Yugoslavia's late autocratic leader Josip Broz Tito drowning in red fiery waves of hell - along with Karl Marx and Friedrich Engels, authors of the 1848 Communist Manifesto.

They are joined by Adam and Eve, current Montenegro politicians and people wearing Turkish turbans. Close by, rival church priests are being gobbled up by the huge jaws of an angry beast with pointed devil ears. 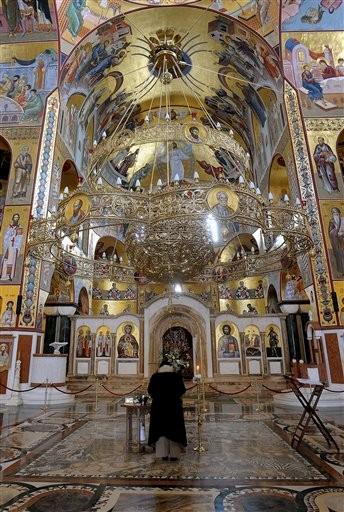 The Serbian Orthodox Church in Montenegro, the tiny Adriatic Sea nation of 600,000 people, has often been involved in politics, especially when Montenegro split from much larger Serbia in 2006. The church's hardline leader in Montenegro, Bishop Amfilohije Radovic, has often bitterly criticized the country's pro-independence leadership and is not shy in openly denouncing Islam and Catholicism.

Church leaders have already been criticized for the high costs of the vast church's lavish design.

Branko Vujacic, a 36-year-old priest serving in the church, noted that the church has seen an increased number of visitors since the fresco was finished last October.

"I don't see anything terrible in the symbolism of this fresco," Vujacic told The Associated Press. 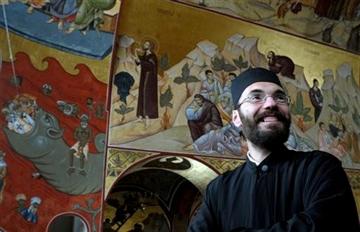 (AP Photo/Risto Bozovic)
"To be honest, I am not one of those who see Marx and Tito on it and I don't even remember how Marx looked like," he added. "But I know that the fresco depicts the spirit of the time when the battle against God was fought."

"Yes, I see them all," Dzomic told the AP. "I see Tito, Marx, Engels and other enemies of Christ on that fresco. Everyone has the right to his own interpretation - some see them, some don't."

The fresco has triggered controversy not only among the priests but also among believers, many of whom used to be passionate communists during Tito's 1945-1980 autocratic rule. Montenegro was one of the six Yugoslav socialist republics that abolished communism in 1991.

"I don't know what to say about the fresco," said Zoran Savovic, a construction worker from Podgorica who described himself "a bigger Christian than a communist." 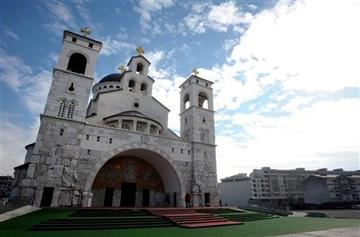 "Tito's time was a golden age for poor people and workers and it will never come back again," Savovic said as he was leaving the church. "Personally, I would like to see the return of Tito's era." Fraudulent clergy encroaching on property of Serbian Church in Montenegro A monument to Stalin dismantled in Georgia
The local administration states that the monument was set up illegally and no permit was granted for setting up such a monument. Patriarch Irinej: I leave strengthened and amazed by what I experienced in Montenegro

Patriarch Irinej: I leave strengthened and amazed by what I experienced in Montenegro
On his official visit to the Diocese of Budimlje-Niksic, His Holiness Irinej, Patriarch of Serbia served the hierarchical Divine Liturgy on Sunday, July 31, the feast day of Martyr Aemilian, in the church of St. Basil of Ostrog in Niksic.
×