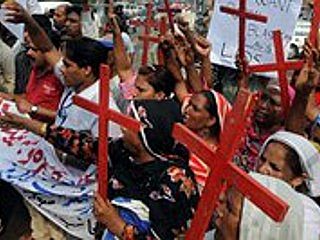 At least 70,000 Christians were killed in 2013 for their faith, reports Sedmitza.ru with the reference to the interview of Massimo Introvigne, an Italian sociologist and coordinator of Observatory on Religious Liberty, with the Vatican Radio.

According to the statistics of the previous year, 100,000 Christians were killed in 2012. The situation in 2013 has not become less dramatic.

Persecutions of Christians in Africa have not been included in the statistics, as the main motive of persecutions here usually belongs to an ethnic group, rather than a religious community. The contradictory information from the African continent needs additional research. Specifically, the following question needs to be answered: are the Christians killed in the Congo and South Sudan victims of persecutions for their faith or not? A famous statistician Todd Johnson answers this question in the affirmative. Massimo Introvigne, however, has not included the statistics on Africa in the report yet. The final version of the document will appear early in 2014.

The report of the USA government on the situation with freedom of religion worldwide mentions among the most persistent violators such countries as Burma, China, Eritrea, Iran, North Korea, Saudi Arabia, Sudan, and Uzbekistan.

Introvigne believes that over recent years nothing has improved in those countries, which are the most dangerous for Christians. "In my view, North Korea remains the worst place. The reason is that Christians are murdered here arbitrarily, though always with charges that they are Christians," said the sociologist.

In some countries, such as Nigeria, the situation with coexistence of religious communities is extremely difficult. Although the Nigerian government is making serious efforts to improve the situation, this does not yield the desired results.

Massimo Introvigne has also mentioned the persecutions of Christians in the Western world, where certain forces are striving to push religion out of public life into the private. Persecution of Christians: no room at the inn
That the message of peace and goodwill is not a political reality for a significant minority of the world's Christians should concern religious and non-religious alike.

450,000 Christians Flee From Muslim Attacks in the Central African Republic
Apparently over 450,000 people have fled their homes after the Muslim dominated Seleka took power and began persecuting Christians irrespective of the alleged government of national unity during the transitional period.
×