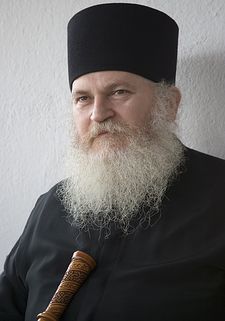 Abbot Ephraim of Vatopedi
On January 10, the Romphea Greek Church agency reported the judicial decision of the first instance court of the city of Athens on the journalist Kostas Vaxevanis, who was the first to begin the media campaign against elder Ephraim and the Vatopedi Monastery.

The court has pronounced that the publications of Vaxevanis on the internet and in the Epikera weekly magazine contained false information and were an insult to the dignity of the Athonite monastery and its abbot. More than that, the journalist well knew that he was operating with false information.

The court ruling obliges Vaxevanis to publish a disclaimer and to transfer 10,000 Euros to the monastery's account for moral damage.

The Vatopedi Monastery has already announced the transfer of this sum to dining halls for the needy, run by the Archdiocese of Athens. Public prosecutor's office of the Supreme court of Greece: Archimandrite Ephraim of Vatopedi not guilty Abbot of Vatopedi Monastery to appear before the court again Vatopedi Monastery abbot to remain in custody despite partial acquittal