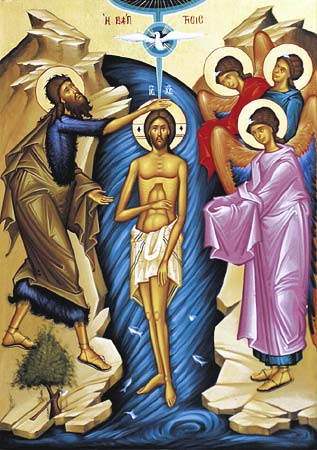 John the Baptist, the cousin of Jesus and the one chosen by God to proclaim His coming, was preaching in the wilderness and was baptizing all who would respond to his message calling for repentance. As he was doing this, John was directing the people toward the one who would baptize them with the Holy Spirit (Matthew 3:11).

The Scriptures tell us that Jesus came from Galilee to John at the Jordan to be baptized by him. Initially, John would not do this, saying that Jesus should baptize him. Jesus said to John, “Let it be so now; for it is proper for us in this way to fulfill all righteousness (3:15). John consented and baptized Jesus.

When Jesus came up from the water, the heavens opened suddenly, and the Holy Spirit descended upon Him. The Bible records that the Spirit descended like a dove and alighted on him. When this happened, a voice came from heaven and said, “This is my Son, the Beloved, with whom I am well pleased.” This was the voice of God the Father.

Christ’s baptism in the Jordan was “theophany,” a manifestation of God to the world, because it was the beginning of our Lord’s public ministry. It was also a “theophany” in that the world was granted a revelation of the Holy Trinity. All three Persons were made manifest together: the Father testified from on high to the divine Sonship of Jesus; the Son received His Father’s testimony; and the Spirit was seen in the form of a dove, descending from the Father and resting upon the Son.

The theme of “manifestation” or “revelation” is also expressed in Scripture with the symbolism of light. In the hymn of the Feast we sing, “Christ has appeared and enlightened the world.” Thus, January 6 is also known as the Feast of Lights. The Church celebrates on this day the illumination of the world by the light of Christ.

The Icon of the Feast of Theophany tells the story from the Gospels in images and color. On the left side of the icon we see John the Baptist (1) who is dressed in camel’s hair and has the appearance of one who lives in the wilderness. His arms are outstretched, showing an attitude of prayer and reverence, but also directing others to Christ. With his right hand he is conducting the baptism.

In the center of the icon is Christ being baptized in the Jordan. He is standing in the water wearing a waistcloth, and with His right hand He is blessing the waters of the Jordan. Above His head is the Holy Spirit descending as a dove upon Him (2). At the top of the icon, a semicircle depicts the opening of the Heavens and the voice of the Father.

THE ORTHODOX CELEBRATION OF THE FEAST OF EPIPHANY

On the right side of the icon angels are shown with their heads bowed in reverence to Christ (3). They are prepared to receive Him as He comes out of the water (4).

The celebration of this Feast of our Lord begins on January 5, a day known as the Forefeast of Theophany. Depending on the day of the week, this could be an evening service with Vespers followed by the Liturgy of Saint Basil or a morning service with Matins and the Liturgy of Saint John Chrysostom. Following the service on January 5, the service of the Blessing of the Waters is conducted. Prior to the evening or morning service the Royal Hours with the Typika are said.

On January 6, the day of the Feast, the Divine Liturgy of Saint John Chrysostom is conducted preceded by Matins and followed by the second Blessing of the Waters.

The Blessing of the Waters is conducted in the church; however in many places throughout the world services are conducted near open bodies of water. As a sign of blessing as Christ blessed the Jordan, holy water is poured into the body of water. An associated tradition has been the tossing of a cross into the water to be retrieved by divers.

The holy water from the church is given to the faithful to consume and to use in blessing their homes. In the weeks following the Feast, clergy visit the homes of parishioners and conduct a service of blessing using the holy water that was blessed on the Feast of Theophany.

Lord, when You were baptized in the Jordan, the worship of the Trinity was made manifest. For the voice of the Father gave witness to You, calling You Beloved; and the Spirit, in the form of a dove, confirmed the certainty of His words. Glory to You, Christ our God, who appeared and enlightened the world.

Today You appeared to the world, and Your light, O Lord, has left its mark upon us as in fuller understanding we sing to You: “You came, You were made manifest, the unapproachable light.”