It is impossible to describe how exquisite and noble are the podvizhniki![1] These people—although they bear the traces of harsh struggles, although their bodies are so withered and emaciated—have a fragrance and grace imprinted on their wondrous souls. 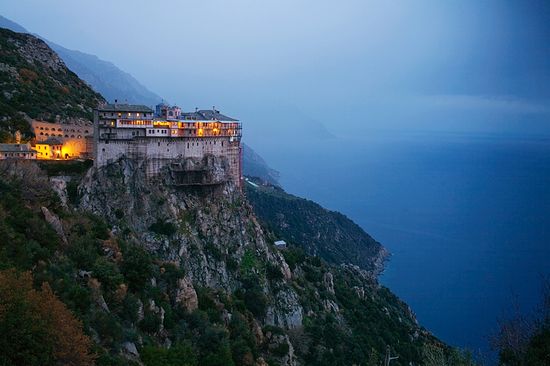 1976. The month of August—July 22 Old Style. The Altar Feast (Panegyr) of St. Mary Magdalene in Simonopetra. How they love this saint in her monastery! Her left hand is kept here—her wrist, palm, and fingers—with the skin and tendons. Its temperature holds steadily at 98.6 °F/37° C—proof that this is the hand of a living witness of the Resurrected Christ, living proof of the fact that “death hath no more dominion over” her, either (Rom. 6:9).

At the All-Night Vigil[2], they showed me a stasidion[3] practically in the center. Next to me there was a grey-haired little starets.[4] He stood as straight as a candle, without stirring. During the course of the service he weakened—he was obviously tired. Most likely, he was sleeping. But not relaxed as people usually sleep. His state was distinct and interesting: his head was leaning on his hand, his eyes almost shut. From time to time you could hear him snore a little, gently and peacefully. But every time the singers would make a mistake, he would come into action and without delay correct it. And then return to … his rest. “The body sleeps out of nature’s need, but his heart keeps awake out of its great love.” And truly, his mind keeps vigil. This man, it seems, lives in another world.

We came to the exapostilarion.[5] All the fathers stood, took off their skufias,[6] and bowed low when the serving priest performed the litany over the relics of the great saint and protectress of the monastery, which were lying on a silver tray. Soon the veneration began—I was stunned… I watched what the others did, and I felt that I wasn’t with them. I tried to understand what to do and how to do it correctly, but I couldn’t touch the secret. Everyone around me, I felt, was experiencing an event that I had no idea about. The choir intensified the celebration. The monks showed by their whole appearance that they were experiencing something the likes of which I could not perceive. The only thing that I was able to do was to follow what was going on—superficially and with curiosity. Soon the starets standing next to me left his place and goes in his turn up to the relics. Making three prostrations, he kissed them, was anointed by the priest, and with deep emotion he returned to his stasidion.

“You go, too,” he says to me, “don’t be shy—today the Saint is fragrant. Receive some of her grace.”

I did what he said and went up to the relics. This is what, apart from everything else, the others had done, too. But my doubts stayed with me. I didn’t particularly believe in all this. I went up in a reverie. And I was astonished by the fragrance. I had an insatiable desire to confirm the statement of this fact from an investigative point of view and to venerate the relics again. But I felt awkward—it was an inappropriate time for experiments! I returned to my place—physically—but mentally I stayed with the Saint. My questions multiplied, but my faith did not increase. It was the “sign” that I had been asking for, but it wasn’t the “sign” that I needed. I couldn’t believe in it, but again, I couldn’t imagine that the monks were lying. They had such pure countenances, and they experienced what was going on without reasoning or arguments. I had no reason to suspect them of lying. 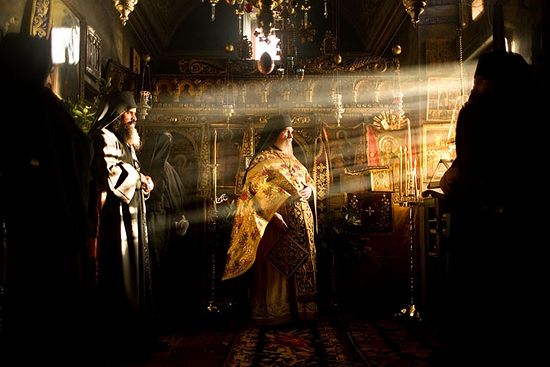 “Geronda[7], how does this happen?” I asked. “Maybe out of piety the fathers sprinkled a little perfume? Or are the relics themselves fragrant?”

“Here reverence is ruined as soon as you sprinkle perfume. Reverence is increased when you receive the ineffable fragrance in simplicity. The Holy Mountain is full of such occurrences.”

“What does 'ineffable fragrance' mean?”

“If we sprinkled a little perfume from a perfume store, then it would be “fragrance.” Now, when we don’t sprinkle anything but the fragrance pours out all by itself, that is called 'ineffable fragrance'.

I bowed and kissed his hand. He himself also was fragrant, as if he had been handling incense. The all-night vigil continued—it lasted twelve hours.

A monk whom I knew came up to me:

“Did you get a blessing from Elder Arsenios?”

“Who is that?” I asked, not having any idea who he was referring to.

“The little old man who was standing next to you.”

“The little old man who was sleeping next to me,” I said to myself.

“He has the 'gift of not washing', added the monk. “It has already been ten years since he has washed his face and he is fragrant all over. He is as pure as a tear. He lives in Kalamitse, in a cell alone, an hour and a half walk from here. Run, before he leaves!”

I did not catch up with him. He had withdrawn to his cell before the beginning of the festive trapeza. He was filled with the Divine service. He didn't need food or words in order to fill his soul. He stood, sat, drifted off for twelve hours, and still every second breathed in the sweetness of the all-night vigil. He hath chosen the good part, which will not be taken away from him (Luke 10:42).

From: A Still Small Voice by Metropolitan Nicholas of Mesogaia and Lavreotiki, Phoni avras leptis, Athens 2006, pp. 139–144. Translated from the Russian version on Pravoslavie.ru.

Metropolitan Nikolaos of Mesogaia and Lavreotiki
Translation by Dimitra Dwelley

[1] Podvizhnik: a “spiritual athlete,” one who struggles spiritually, takes on podvigs. Podvig – a difficult spiritual task taken on voluntarily.—Trans.

[2] Agrypnia: the very long Divine service celebrated with great solemnity on Athos on Sundays, great feasts and feasts of the saints in whose honor churches are named, and likewise on days commemorating particularly revered saints.

[3] Stasidion: in Orthodox monasteries, a special wooden chair with high armrests and a seat that can be lifted up out of the way, so that a monk can stand up during the long vigils while being able to rest his arms on the armrests. When it is allowed or necessary out of weakness, the seat may be folded down so he may sit. —Trans.

[4] starets (here, “starchik”, an affectionate form): an elder, usually monastic, who through long experience, obedience, spiritual struggles, love and humility is given special spiritual gifts and to whom others come for spiritual guidance. —Trans.

[5] The Dismissal Hymn, the troparion that follows the Canon at Matins, near the end of the service. Sometimes called svetilen/photogogikon, because it sings of Christ the Light of the world. It is connected with the Matins Gospel. Former Taliban from Afghanistan baptized at Mount Athos
Ahmed was born and raised in a village in Afghanistan in the middle of war. For years he worked for the Taliban doing various things. He was a fanatical Muslim who belonged to so-called radical Islam.

Mount Athos Featured in 60 Minutes Segment will Rebroadcast on Christmas

Mount Athos Featured in 60 Minutes Segment will Rebroadcast on Christmas
The Holy Mountain Athos, the sanctuary of Orthodox Christian monasticism for over a thousand years, which is directly under the spiritual jurisdiction of His All Holiness, Ecumenical Patriarch Bartholomew, is featured on the CBS News program “60 Minutes”.

Holy Martyrs Killed by the Latins at the Iveron Monastery on Mt. Athos (13th century)
Archpriest Zakaria Machitadze
Georgian monks began to settle on Mt. Athos in the middle of the 10th century, and a Georgian monastery, Iveron, was founded there not long after. At that time foreign armies were constantly invading Mt. Athos. In the 13th century the Crusaders stormed through the region, and between 1259 and 1306 the pope’s private army devastated Mt. Athos several times.
Comments

Yianni Sirris1/26/2014 8:11 am
My name is Yianni Sirris. I am Greek Orthodox and I live and work in Virginia Beach, Virginia, USA. My wife Viktoriya is a Russian from Moscow.

I saw the documentary “The fall of an Empire - The Lesson of Byzantium” by Archimandrite Tikhon and I was very much impressed by this film. Father Tikhon has done an excellent job in presenting this documentary. I will have as many friends as I know to see this film.

I have been to Moscow 3 times, and on my next visit I would like to stop with my wife and meet father Tikhon at his office, if this is possible.

Please let me know if this possible.