The Meeting of Our Lord 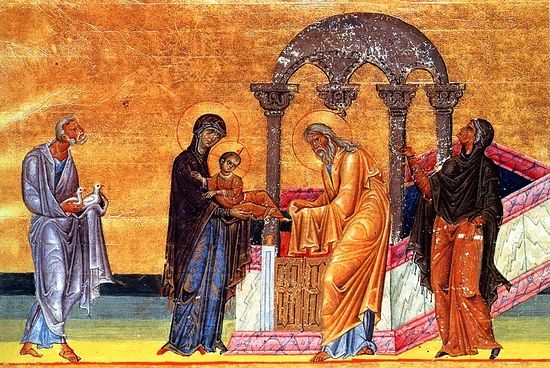 Thumbnail from Menologion of Basil II, the first quarter of XI in the Vatican Library (VAT. GR. 1613)

On February 2nd the Church celebrates the great feast of The Meeting of our Lord in the Temple. The Gospel lesson for that day relates how the mother of Jesus brought Him to the temple, as was the custom and requirement under the God-given Law of Moses, of Israel (Exodus 13:2, 12; Leviticus 12:2-8). When the righteous Simeon, who received Christ in his arms at the temple, saw the child he knew immediately that this was the Redeemer promised by all of Israel’s prophecies, for the elder was inspired by the Holy Spirit (Luke 2:26-27). Being inspired he himself uttered prophetic words which form the hymn sung or chanted at the end of every Vespers service: "Lord, now lettest Thou Thy servant depart in peace, according to Thy word; for mine eyes have seen Thy salvation which Thou hast prepared before the face of Thy people, a light to lighten the gentiles, and the glory of Thy people Israel" (Luke 2:29-32).

This particular feast is part of the great celebration that began forty days prior, with the Nativity of Christ (December 25). Eight days later (January 1) we remembered the Circumcision of Christ and then His Baptism (January 6). The commemoration of these events in our Lord’s earth life basically form one feast, the feast of the Incarnation of God the Word.

God literally entered the world, into time and history. He was physically present in the midst of His people, His creatures whom He loves. Our Lord took on human nature in order to reconcile unto Himself, man who had strayed far from the Source of his life.

In taking on the "form of a servant" God, at the same time, in the Person of Christ, fulfilled every requirement of the Law that He Himself had given to His people through Moses. He demonstrated, thereby, that everything that had happened in Israel’s history could not be described merely as a succession of unrelated events. Rather this was a history with a definite goal: the salvation of mankind. He identified Himself as the Director of that history and fulfilled its expectation.

When the righteous Simeon took the child into His arms and declared that this indeed was Salvation Incarnate, the "Light to lighten the gentiles, and the glory of Israel," a new era began; the era of God’s presence among His children.

To this day, all of the Church’s celebrations, no matter what the event commemorated may be, whether in the life of Christ, of the Theotokos, or of the saints, all are celebrations of Christ and the establishment on earth of the Kingdom of His presence. He initiated this Kingdom and promised its ultimate realization. And now, just as the Old Israel had awaited the beginning of God’s Kingdom, the New Israel (the Church) awaits the Second and Glorious Coming of Christ and the fullness of His Kingdom, revealed.

Although all of our celebrations are intimately rooted in the knowledge that we have been called for complete communion with Christ and to live in function of His Kingdom to which we already belong, we still live in a world that has for the most part rejected what Christ gave it, that is, authentic life "in abundance," life with real purpose and meaning. We Christians, in spite of having accepted what God’s intervention in human affairs gave us, slip repeatedly and fall into the great temptation to convert the things of this world into gods. We are constantly attracted by ways of seeking happiness and fulfillment that exclude God. This, of course, always proves to be vain and futile.

So our lives vacillate, back and forth, between the assurance of salvation and indifference, between moments of real joy because we know that God is with us, and moments of boredom because we cannot give ourselves totally over to Him.

Every Christian celebration reaches its climax in the Divine Liturgy for the feast. In this sacred work, when God’s people assemble in His name, we actually become participants in the Heavenly Kingdom to come. We are as literally present with Christ in His future Kingdom as the Apostles were with Him at the Last Supper. So the Kingdom is initiated among us and we enjoy it before our time, by anticipation. This is what every Eucharist is; this is what our feasts and celebrations are all about, and that is why the Eucharist is the very center of all of them.

I will emphasize again, however, that although what we have said is true, we continually orient our lives towards everyday pursuits, often living as though we had never experienced this divine reality. That is why repentance and penitential seasons are in order. That is why in approximately one month we will enter the Great Fast or Lent during which time we are exhorted to repent of our sins.

It is a particularly fortunate coincidence that in 1999 the feast of the Meeting of our Lord, a feast of His Kingdom, coincides almost to the day with the start of the Lenten Triodion and the announcement of the beginning of the Great Fast. On the Sunday of the Publican and the Pharisee (January 31) we are reminded of one of the basic reasons for our need of repentance: our self-righteousness, our pride, our feeling of superiority and mistreatment and intolerance of our neighbor.

Basically what is important for us Christians is that we have really "seen the True Light, received the Heavenly Spirit, found the true faith" in this experience of the Kingdom of God. The question we must all ask ourselves sincerely, however, is "what are we like when we return into this world after this Heavenly experience?"

To Christ Who willed to be held in the arms of the righteous Simeon for our salvation be glory, honor and worship, now and ever and unto ages of ages. Amen. Does the Pure One Have Need of Purification?
We see here that the KJV erroneously translates this verse to read "days of her purification". However, a puristic translation of the text would be translated as "days of their purification". Homily on the Meeting of the Lord
St. Theophan the Recluse

Homily on the Meeting of the Lord
St. Theophan the Recluse
What a tender scene the Meeting of the Lord shows us! The venerable elder Simeon, holding the infant God in his hands, on either side of him are the righteous Joseph and the Most Holy Mother of God. Not far away is the Prophetess Anna, an eighty-year-old faster and woman of prayer. Their eyes are all directed toward the Savior. Their attention is absorbed by Him and they drink in spiritual sweetness from Him, which feeds their souls. You can judge for yourself how blessed was the state of these souls!