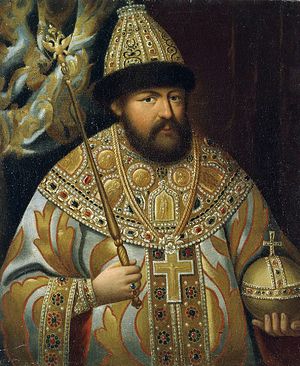 Tsar Alexis, the father of Peter I

If you are an Orthodox Christian, it will not have escaped your notice that Great Lent is barreling down on us like a freight train.

No meat. No dairy. No kidding.

I was starting to feel sorry for my gluttonous self in advance when I came across this passage the other day from historian Robert K. Massie’s Peter The Great: His Life And World. It concerns the habits of Tsar Alexis, the father of Peter:

Following morning mass, the Tsar returned to administrative work with his boyars [nobles] and secretaries until time for dinner at noon. He ate alone at a high table surrounded by boyars who dined at lower tables along the walls of the room. He was served only by special boyars, who tasted his food and sipped his wine before offering the cup. Meals were gargantuan; on festival days, as many as seventy dishes might be served at the Tsar’s table. Zakuski, or hors d’oeuvres, included raw vegetables, especially cucumbers, salted fish bacon and innumerable pirozhki, sometimes stuffed with egg, fish, rice or cabbage and herbs instead of meat. Then came soups and roasts of beef, mutton and pork, seasoned with onion, garlic, saffron and pepper. There were dishes of game and fish such as salmon, sturgeon and sterlet. Dessert was cakes, cheeses, preserves, fruits. Russians drank mostly vodka, beer or a milder drink called kvas, made of fermented black bread, variously flavored with raspberry, cherry or other fruits.

But Alexis rarely touched any of the succulent dishes that were presented to him. Instead, he sent them as presents to various boyars to show special favor. His own palate was monastically simple. He ate only plain rye bread and drank light wine or beer, perhaps with a few drops of cinnamon added; cinnamon, [the Tsar's English physician] Dr. [Samuel] Collins reported, was the “aroma imperiale.” During periods of religious fasting, said Dr. Collins, the Tsar “eats but three meals a week; for the rest, he takes a piece of brown bread and salt, a pickled mushroom or cucumber and drinks a cup of small beer. He eats fish but twice in Lent and observes it seven weeks altogether. … In fine, no monk is more observant of canonical hours than he is of fasts. We may reckon he fasts almost eight months in twelve.” The Beginning of Great Lent
St. John of Shanghai

The Beginning of Great Lent
St. John of Shanghai
Just as a stairway is built into a tall building in order to enable one, by climbing the steps, to easily reach the top, so too, the various days in the year serve as steps for our spiritual ascent. To Seek that which was Lost: A Sermon on Zacchaeus Sunday
Fr. George Brooks

To Seek that which was Lost: A Sermon on Zacchaeus Sunday
Fr. George Brooks
As we go through these Sundays of prepartion for Great Lent and enter Great Lent, we start building a sense of forgiveness in our hearts for other people—for people we don't even know, for people we will encounter this coming week and the weeks to come, strangers, drivers who irritate us on the highway, co-workers, and all the other people that God has put before us to give us a test—to see if we can truly love like He does.
Comments
×