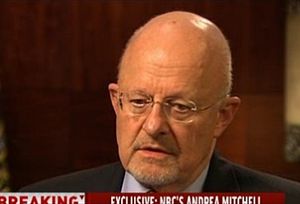 The top U.S. intelligence chief said on Tuesday the war in Syria had created an “apocalyptic disaster” and said he was convinced that documents alleging torture and murder in the conflict were authentic.

National Intelligence Director James Clapper was asked by Senator John McCain during a Senate hearing whether he had seen the documents, published by an array of media outlets including CNN, as potential proof of atrocities by Syrian President Bashar al-Assad’s government.

Clapper said he had, and that he believed they were real.

“They’re terrible. And when you consider the humanitarian disaster in addition to the 2.5 million refugees, the 6.5 million or 7 million that are internally displaced, the 134,000 plus people that have been killed, it is an apocalyptic disaster,” he said.

McCain, an Arizona Republican, asked if it was Clapper’s “professional opinion” that the documents are authentic.

“I believe they are. I have no reason to doubt that, and it would be difficult to suggest, you know, that something of that magnitude could have been fabricated,” Clapper told the Senate Armed Services Committee.

Clapper said his expectations for Syrian peace negotiations in Geneva are “pretty modest” and called prospects for a long-term political solution to the three-year-long civil war “problematic.”

He said his expects a “sort of prolonged stalemate” in which Assad’s government does not have the strength to hold onto territory it clears, and the opposition has enough external support to keep fighting.

An international mediator said on Tuesday that peace talks between the Syrian government and opposition are not making much progress, after a face-to-face meeting of the warring parties in Geneva that both sides called fruitless.

Clapper and other U.S. officials point to Syria as a source of regional instability and also a danger for European countries and the United States.

The strength of the Syrian insurgency is now estimated at anywhere from 75,000 fighters to 115,000, organized into more than 1,500 groups of “widely varying political leanings,” Clapper said.

“Somewhere in the neighborhood of between 20,000 and maybe up to a top range of 26,000 we regard as extremists,” he said. “And they are disproportionately influential because they are among the most effective fighters on the battlefield.”

Among 7,500 foreign fighters from 50 countries, Clapper said, are al Qaeda veterans from Afghanistan and Pakistan who aspire to attack Europe, as well as the United States. The Desperate Plight of the Assyrian Christians of Iraq and Syria

The Desperate Plight of the Assyrian Christians of Iraq and Syria
As fragmented and fractious militias whose loyalty is to a warlord, cleric or sect hold sway over the region, Assyrian Christians have been left tragically exposed by the absence of state protection or political and legal recourse.

Worry about militant Islamists in Syria
The worsening situation in Syria threatens the Middle East in many ways that will continue to evolve in the months and years ahead. But perhaps the most troubling threat is the continued expansion of the hard-line groups of Salafist-takfiri Islamists. These groups are troubling for Syrians above all, but also because they threaten other countries in the Middle East and around the world.
×