SOURCE: The Spectator
By John Laughland 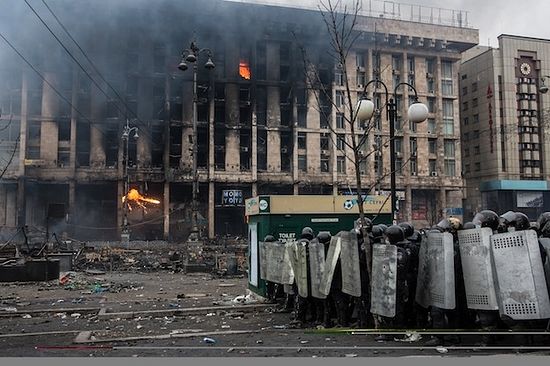 To discuss the Ukrainian crisis in terms of a choice between Europe and Russia is misleading for several reasons.

First, the European issue has been ruthlessly exploited by the Ukrainian opposition and its Western backers as an excuse for overthrowing the government illegally and by force. Opposition leaders have never distanced themselves from the most radical elements on the streets of Kiev, even though these include neo-Nazis. On the contrary, they have done everything to use their violence as a bargaining chip in their battle with the government. Let us never forget that the majority of the 25 deaths on the night of 18 – 19 February were murders committed by the protesters: 9 policemen were shot dead or stabbed to death, while 3 members of the governing party and a journalist were also killed.

Second, the choice Ukraine faced between the EU and Russia was not an equal one. The EU association accord was a comprehensive political straitjacket designed to lock Ukraine into the orbit of Brussels and Washington by installing, as all over the EU itself, a pro-EU (and ultimately pro-NATO) elite whose policies would remain unchanged whichever team was in power. By contrast, Ukraine’s agreements with Russia are confined to a free trade zone and, lately, loans. They carry no internal political implications at all. Even the Customs Union of Russia, Kazakhstan, Belarus and Armenia, which Ukraine will probably not now join, takes decisions by consensus: it has none of the heavy-handed supranational and technocratic control of Brussels.

Third, Ukraine did not really have a choice. Thanks to decades of corrupt politics, the Ukrainian state is bankrupt. So is the EU. In spite of stringing Kiev along with pretty words about a European future, the EU could offer only $800 million , via the IMF, and that came at the price of exceptionally painfully economic reforms. Ukraine would have been subjected to the same devastation of its agriculture, on which it depends, as Romania and Bulgaria were in their pre-accession period. Its industry would have collapsed as well. Russia, by contrast, has been able to offer nearly 20 times this sum in loans to prevent Ukraine from becoming insolvent, and it is the biggest market for Ukrainian exports – bigger than the whole of the EU put together. Moreover, Europe’s coffers are empty for good reason: her member states are drowning in their own debt, while the economic vice turned on its own member states – Greece, Spain and others – has plunged those countries into misery. Russia, by contrast, has tended to run balanced budgets while her growth ticks along at 4% or so, against Europe’s anaemic 1%. Trade in the Customs Union has grown by 40% in 5 years. Ukraine’s signature on the EU association agreement (the one Georgia signed runs to 400 pages) would have been the longest suicide note in history.

To avoid facing up to its own inexorable decline, the post-modern EU, like the United States, has plunged ahead with a radically anti-Russian geopolitical and ideological agenda based on left-wing fantasies about resurgent nationalism in Moscow. We used to laugh at Cold Warriors but the absurd anti-Russian ravings of Dr Strangelove and Jack D. Ripper have now become the standard fare served up in Washington and Brussels. What a shame most of the Western media swallows this rubbish. Snipers shooting at policemen in Kiev, 20 injured
More than twenty law-enforcement agency officers were injured on Thursday as a result of the sniper's shooting on the Maidan Nezalezhnosti ("The Independence square") in Kiev. louis hemmings4/15/2014 11:47 pm
9 policemen 3 members of the governing party (which one is that??) one journalist killed also means that 12 Euromaden were also killed. that's about equal by my maths!

can the Kiev protesters really "all" be nazis?? are "all" Christians in the west pro Euro / USA? are all Russian Orthodox swallowing Putin's fascist propaganda? of course not.

as Christians, i would have thought it your calling from God Almighty to be impartial and to not bear false witness, as the Holy Scriptures command.

Sadly, the Truth is constantly ignored by both sides in order to achieve selfish and mostly personal agendas. The Orthodox Church stands against Phyletism because Phyletism divides people, even those of the same religious persuasion. As Truth is of God, politics flows from hell and is made up of deceptive nationalism, ethnicity, and culture mixed in with economic greed! While politics corrupts all three, the Truth in Christ transfigures and brings all three into unity. How sad it is that we all have missed and continue to miss the mark of Love and Peace.

My prayers are with the innocent victims and people of the Ukraine.

May the Peace of God be with both.