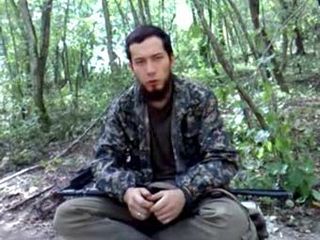 One of the most famous Russian Wahhabi Said Buryat (Alexander Tikhomirov). Destroyed in 2010
The specialist in Islamic studies Roman Silantyev has reported that at the present time Russian Wahhabis number nearly 700,000 adherents.

Speaking at the Northern State Medical University in Arkhangelsk, he stated that Wahhabism was the most dangerous and quick-growing sect, reports Interfax-Religion.

"The geography of terrorist cells is wide enough. They are present virtually in all regions of Russia. Meanwhile, almost all active terrorist organizations in the world have an islamist origin," noted R. Silantyev.

He believes that the only way of struggle with Wahhabism in Russia is a sharp toughening of the legislation when members of terrorist organizations are subject to criminal prosecution for the very fact of participation in such organizations.

According to the expert, the alarming factor is the growing passion of the ethnic Russian youth for Wahhabism. In the terrorists list individuals with Russian and Ukrainian surnames are beginning to prevail. It is time to declare total war on Wahhabism, Russian specialist on Islam R. Silantyev believes Council of Muftis of Russia fears repetition of Syrian scenario in Russia
The Muslim and Jewish communities of Russia in connection with the terrorist acts in Volgograd have called to take real measures for struggle with terrorism. Lack of control of the Internet frees the hands of terrorists, says the Youth Club of World Russian People's Council

Lack of control of the Internet frees the hands of terrorists, says the Youth Club of World Russian People's Council
As the authors have noted, various extremist organizations, terrorist groups, and sects are very active in virtual space. There they propagate their ideas and recruit followers, and "the main target of such manipulations is the youth". Tatarstan to Treat Church Torchings as Terrorism
The republic's prosecutor general on Thursday blamed the attacks on unspecified extremists in a statement on Tatarstan's prosecutor office's website.