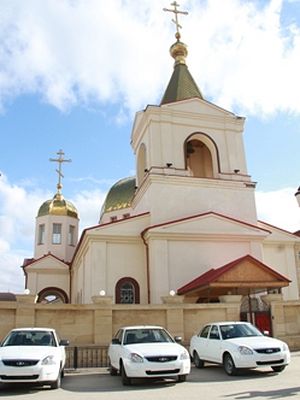 Rector of the Church of Holy Archangel Michael in Grozny Priest Gregory Kutsenko, Cleric of the Shelkovskaya parish of Holy Greatmartyr Barbara Fr. Sergy, and Rector of the Church of the Nativity of Christ in Naurskaya Stanitsa Hieromonk Ambrose (Marchenko) were given new Lada Priora cars by order of the republic's president Ramzan Kadyrov, reports the Chechen head's press service.

"These cars are being allotted for operative settlement of believers' issues and meeting of church needs," D. Kashlyunov said.

Moreover, R. Kadyrov has made a decision to fix salaries for clergy. The means will be assigned from non-budgetary sources. It has not been specified how much the salaries will be. Furthermore, housing problems of each priest have been fully solved, the message reads. Prayer rooms for Orthodox police officers opened in Chechnya
The blessing of prayer rooms has taken place in the village of Alkhan-Kala in the Chechnya Republic. The prayer rooms are intended especially for police officers from Orenburg who are on assignment in the North Caucasus. Now each Ministry of Internal Affairs worker who is far from his home will have an opportunity to pray or just to stay for a short time alone with his thoughts. Cypriot priests agree to pay cut
Leaders of the Cyprus Orthodox Church on Tuesday decided to take a 25 percent pay cut, while lay staff will see their income slashed by 15 percent in an austerity drive by the clergy.