Third Sunday: Veneration of the Cross 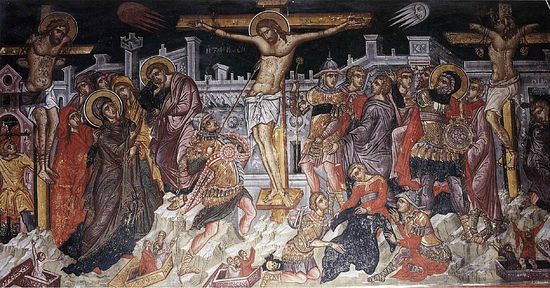 Before us is the Cross. This is the Cross of Christ. But on Golgotha there were two more crosses: Christ in the middle and on either side of Him were crucified two thieves. Christ on the Cross performed the sacrifice of redemption for the whole world. But what brought those crucified with Him to these crosses? Their crimes—after all, they were thieves.

What made them thieves? There was a time when they were innocent children and maybe even played together. This was the bright time of childhood. And later, they felt, as each of us does, two opposing forces influencing them: a good one and a bad one. And their will had to yield to either one or the other side. In the beginning they wavered, but later on, because the evil appeared more alluring, they began more and more often to consent to the evil. At first, conscience reproached them, but later it became hardened and stopped tormenting them. And then, without a backward glance, they completely took the side of evil. First, in the realm of will and feelings, and later they fell into open crimes which brought them to these crosses, to death sentences. And here they were both dying. Not only their hours, but even their minutes were numbered. And between them the Lord was dying on His Cross. One of the hanging criminals reviled Him. But the other, on the contrary, silenced the abusive one and said to Jesus, Lord, remember me when Thou comest into Thy kingdom. And Jesus said unto him, Verily I say unto thee, Today shalt thou be with Me in paradise (Lk. 23:42-43).

Christ died first and then the two thieves. On the face of the one who reviled the Lord was imprinted the grimace of blasphemy, and only the laugh of Mephistopheles rent the air above his cross. This laughter was terrible and triumphant. Yes, this was the final victory of the power of evil over this soul. But above the cross of the repentant thief was a triumphant peace and a kind of joyous radiance. And at this time, his soul, bright and pure, washed by sufferings and repentance, entered Paradise. With joy and wonder the orders of angels looked on this first soul entering Paradise, this soul of the first saint of the New Testament—the soul of a thief, washed with the Blood of Christ.

Now we are gathered together here in church before the Cross of Christ. In the eyes of human judgment we are not law-breakers or criminals. But are we as well-off before the Judgment of God? No. All of us have broken and are breaking the commandments of God. And if this is so, it means we are law-breakers. If until now we have not committed visible crimes, this is only because the Grace of God and our Guardian Angels have not let us. But if we were left to ourselves, God alone and our conscience know what might happen to us. And what still may happen if God abandons us. Let us honestly examine our conscience; let us ask it, and it will answer that according to the Judgment of God, we are no better than the thief, and maybe even worse. His sufferings on the cross alone could redeem so much. And we, with what can we redeem ourselves? He was a wise thief, but we... we live carelessly and think that we are going to live on and on. But our years, months, weeks, and maybe days and even hours are numbered. And also, will we have in the last moment that repentance which he had? What if suddenly another state of mind arises, opposite to it? May the Lord keep us from this!

Right now, as we approach and kiss the Cross, let us say with the wise thief, "Lord, remember me in Thy kingdom!" We may not have another minute. So let us use this minute which the Lord gives us: "Thy Cross, O Lord, we venerate and Thy Holy Resurrection we glorify."

From The One Thing Needful Third Sunday of Lent: Veneration of the Holy Cross
Blessed Theophylact of Ochrid

Third Sunday of Lent: Veneration of the Holy Cross
From The Explanation of the Gospel of St. Mark by Blessed Theophylact, Archbishop of Ochrid and Bulgaria
Blessed Theophylact of Ochrid
See that Christ does not compel a man to die on a cross against his own will. Instead He said, Whosoever desireth. The Lord is saying: "I compel no one. I invite him to something good, not to something bad to which he must be forced. Whoever does not want these things is not worthy of them." Relic of the Holy Cross arrives in London from Jerusalem

Relic of the Holy Cross arrives in London from Jerusalem
On Saturday 30th November, the city of London was honored to receive a fragment of the Holy Cross of our Lord, which arrived at the Cathedral of the Dormition of the Mother of God at 3:00 pm.