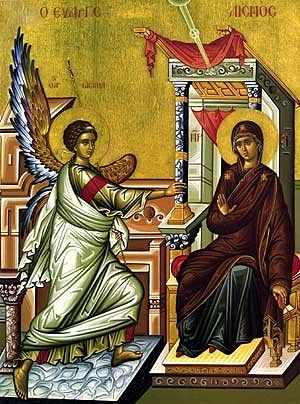 The Feast of the Annunciation of Our Most Holy Lady, the Theotokos and Ever-Virgin Mary is celebrated on March 25 each year. The Feast commemorates the announcement by the Archangel Gabriel to the Virgin Mary that our Lord and Savior Jesus Christ, the Son of God, would become incarnate and enter into this world through her womb.

The biblical story of the Feast of the Annunciation is found in the first chapter of the Gospel of Luke (1:26-39). The Archangel Gabriel appeared to the Virgin Mary, who was living in Nazareth, and said to her, “Hail, O favored one, the Lord is with you.” Mary was perplexed and wondered what kind of greeting this was.

The angel told her not to be afraid, for she had found favor with God. He said, “You will conceive in your womb and bear a son, and you shall call his name Jesus. He will be great and will be called the Son of the Most High; and the Lord God will give to him the throne of his father David, and he will reign over the house of Jacob forever; and of his kingdom there will be no end.”

Mary responded to the angel by asking how this could happen since she had no husband. The angel told her that the Holy Spirit and the power of God would come upon her, and that the child to be born of her would be called holy, the “Son of God.”

The angel then proceeded to tell the Virgin Mary that her cousin Elizabeth had conceived a son in her old age (John the Baptist), and affirmed that with God nothing is impossible.

In faith and obedience to the will of God, Mary replied to the angel, “Behold, I am the handmaid of the Lord; let it be according to your word.” Upon her response, the angel departed.

It is on the Feast of the Annunciation, that Orthodox Christians commemorate both the divine initiative of God, whereby He took on flesh from the Virgin for our salvation, and the human response, whereby Mary freely accepted the vocation offered to her. He elected to become man, and He desired to do this with the willing agreement of her whom He chose as His mother. Mary could have refused, for she was not a passive instrument, but an active participant with a free and positive part to play in God’s plan for our salvation. Thus, when on this and other feasts the Orthodox Church honors the Theotokos, the Mother of God, it is not just because God chose her but also because she herself chose to follow His will.

The icon of the Annunciation is one that presents the joy of the announcement of the coming of Christ. It is an icon of bright colors, depicting the Archangel Gabriel (1), who has descended from heaven, and the Virgin Mary (2), who has been chosen to be the Mother of God.

The Archangel is shown with his feet spread apart as if he is running to share the good news with Mary (3). In his left hand is a staff, the symbol of a messenger. His right hand is extended toward Mary as he delivers the message and announces the blessing bestowed upon her by God (4).

On the right side of the icon the Virgin sits on an elevated seat, indicating that as the Mother of God she is “greater in honor than the cherubim, and beyond compare more glorious than the seraphim, who without corruption gave birth to God the Word.” In her left hand she holds a spindle of scarlet yarn (5) which depicts the task she was assigned of preparing the purple and scarlet material to be used in making the veil for the Temple in Jerusalem. Her right hand is raised in a gesture of acceptance in response to Gabriel’s message (6). Her posture expresses willing cooperation with God’s plan of salvation. The three stars on her garments (7) represent that she was a Virgin before, during, and after the birth of Christ.

At the top of the icon the segment of a circle represents the divine realm (8), from which three rays emerge. This demonstrates the action of the Holy Spirit coming upon her.

The Feast of the Annunciation of the Theotokos is celebrated with the Divine Liturgy of Saint John Chrysostom which is conducted on the morning of the Feast and preceded by a Matins (Orthros) service. A Great Vespers is conducted on the evening before the day of the Feast. Scripture readings for the Feast are the following: At Vespers: Genesis 28:10-17; Ezekiel 43:27—44:4; Proverbs 9:1-11. At the Matins: Luke 1:39-49, 56. At the Divine Liturgy: Hebrews 2:11-18; Luke 1:24-38.

The Feast of the Annunciation in the Greek Orthodox Church also marks a day of national celebration for the people of Greece and those around the world of Greek descent. It was on March 25, 1821 when Greece officially declared its independence and began the revolution that would eventually give the nation its freedom after 400 years of rule by the Ottomans. In addition to the services for the Feast, festivities and parades are held and official proclamations are offered throughout the world in recognition of Greek Independence Day.

Apolytikion (Fourth Tone)
Today marks the crowning of our salvation and the revelation of the mystery before all ages. For the Son of God becomes the son of the Virgin, and Gabriel proclaims the grace. Wherefore, we also cry out with him, "Hail, O full of grace, the Lord is with you."

Kontakion (Plagal of the Fourth Tone)
To you, Theotokos, invincible Defender, having been delivered from peril, I, your city, dedicate the victory festival as a thank offering. In your irresistible might, keep me safe from all trials, that I may call out to you: "Hail, unwedded bride!"

The Life of the Virgin Mary, The Theotokos, written and compiled by Holy Apostles Convent (Buena Vista, CO: 1989).

The Synaxarion: The Lives of the Saints of the Orthodox Church, Vol. 4, compiled by Hieromonk Makarios of Simonos Petra and translated from the French by Mother Maria Rule and Mother Joanna Burton (Chalkidike, Greece: Holy Convent of the Annunciation of Our Lady, 2003) pp. 227-232.