The Hymn of Cassiani (with audio) 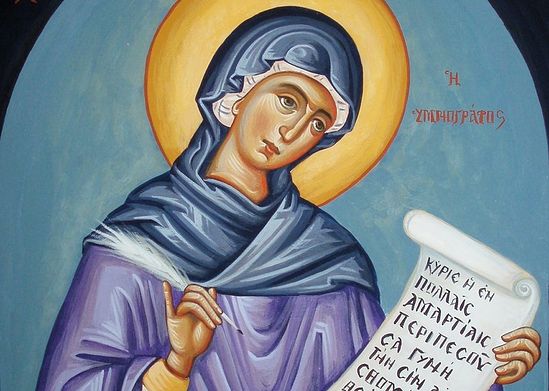 The Holy Wednesday services carry very much of great value, but a glistening jewel in this crown is a stichera composed by a nun of Byzantium, the great liturgical poet Cassiani, also known as Cassia. Cassiani has the distinction of being the only woman hymnographer whose compositions are included in the Orthodox services under her name. And if that is not sufficiently intriguing, there is also the wistful story of her life and how she came to be a nun.

Cassiani lived in Constantinople in the ninth century. Theophilus was already an adult when his father, Emperor Mikhail II, decided to crown his son before his own death, and therefore he needed to give him in marriage. According to a custom in Byzantium, the future emperor was given an opportunity to choose his bride from a group of young noble ladies gathered by his mother. With poetic flourish, Theophilus was to look upon the candidates and, bearing a plate with a golden apple, finally bestow it upon his chosen one. Being from a noble and wealthy family, possessing a brilliant mind and education, Cassiani stood that day among the potential empresses. When Theophilus saw her, her beauty smote his heart. Approaching Cassiani with the apple, Theophilus uttered strange words of courtship: “Through a woman sin came into the world.” Without so much as batting an eye, Cassiani replied, “and by a woman, salvation came into the world.”

What made Theophilus say this to his prospective bride? Was he testing her humility? Was he testing her intellect? Was it he thrown too far off balance by Cassiani’s beauty to think of anything more romantic? And what made Cassiani make such a bold reply? After all, she was addressing a very high personage in an extremely courtly society. Was it pride? Was she showing off her sharp mind? Or was she feeling equally awkward and coy, and simply said the first thing that came into her bright head? Or was it an early manifestation of Cassiani’s poetic wisdom?

We will never know the answer to those questions, and furthermore it’s between the two of them. We only know the result—Theophilus did not like her answer and married Theodora instead. We also know that this choice was a blessed one. Empress Theodora became a saint, who restored the veneration of icons after a long period of iconoclasm in the Byzantine Empire. Cassiani very soon after this incident left the world to become a nun, founding a monastery called the Icasia, named after the foundress.

Describing ancient Constantinople, the writer George Kodin recalled Icassia Monastery. “Icassia Monastery was built by Icassia (another form of Cassiani), a pious nun and beautiful virgin, who was very wise, composed many canons and stichera and other writings worthy of amazement, and set them to music in the reign of the Emperor Theophilus.”

Cassiani’s contemporaries raved over St. Cassiani’s works. Niceforos Callistos Xanthopoulos included her name in his list of famous poet-hymnographers alongside St. Theodore the Studite, St. Cosmas of the Holy City, St. Andrew of Crete, St. Theophanes, and others.

Her works are included in the Orthodox service books, although not all are attributed to her. It was considered improper at the time for women to author canonical services, and a number of her hymns were included anonymously, or under someone else’s name. There are works that have not survived to our time, but besides the Holy Wednesday stichera there is another famous composition also included in the Lenten Triodion—the irmoi of the canon on Holy Saturday. It is known that Cassiani had composed the entire canon, but due to the prejudice against women hynmographers it was given to Mark of Hydrus and Cosmas of the Holy City to revise. However, the stunning irmoi remain a part of Cassiani’s legacy.

We English speakers are not likely to appreciate fully the exquisiteness of Cassiani’s hymns, unless we learn ancient Greek, and learn it well. Cassiani wrote using the most elegant poetic devices of the time. She corresponded with other great hymnographers, such as St. Theodore the Studite. There are in fact three extant letters written by St. Theodore that most scholars agree were addressed precisely to Nun Cassiani the hymnographer. One of these especially leaves no doubt in their minds that it was to her:

It is wise, and all reasonable, that your virtuousness again has said to us; we therefore have full right to be amazed and thank the Lord, having met such a mind in a young maiden. True, it is not the same as those who have gone before us; for we contemporary men and women fall infinitely far behind them in both wisdom and learnedness. But in any case, in the present time, you are greatly distinguished. Your words are your adornment more than all corruptible magnificence. But it is remarkable that your life corresponds also to your words, and you do not portray one-sidedness in either one or the other case, for you have resolved to suffer for Christ in this persecution.

St. Cassiani, as St. Theodore recalls here, was flogged for her firm belief in the veneration of icons and stand against iconoclasm.

You did not limit yourself to being flogged, but again, not having the strength to resist, you were overcome by a fervent love for a good confession, which is always more fiery. You truly know what is good and most pleasant (Ps. 132:1)—namely to suffer for the truth and be outstanding in your courage. Gold and silver, glory and magnificence, and all other earthly, false prosperity is nothing, although they are called good, for they are fleeting and disappear, like a dream and a shadow. And what is next? Next follows the choice of monastic life, which you promised to accept after the persecutions cease. Although it is wondrous, I am not surprised at your decision. Why? Because anyone could draw this conclusion from what went before. The proof can also go in the reverse. If we see smoke, of course, fire will also show itself. And in this case, if there is a confession of Christ, it is clear that life will also shine in monastic perfection. How blessed you are in both respects! But do not wait for me to place my hand upon your head (i.e., give her the monastic tonsure), for I am a sinner; let him do this, from whose priestly laying on of hands you shall be consecrated…

St. Theodore’s letter leads us to believe that Cassiani was first flogged for her stance against iconoclasm and then became a nun, and that her love for Christ even unto the shedding of blood was the true reason for embracing the monastic life, and not the jilting she took from Theophilus. Perhaps her answer was even designed to nullify the brief courtship. Nevertheless, a pious tradition remains concerning the stichera that Cassiani composed for Holy Wednesday, which surrounds her and Theophilus with a mysterious and doleful light. According to this tradition, on a mystically inspired evening in her Byzantine cloister, Cassiani sat composing a hymn for the Matins service on Holy Wednesday. Suddenly the convent was filled with the clatter of someone’s imperial entourage—it was Theophilus, coming to see her for one last time before he died. Before he could enter her cell, Cassiani hid in the closet, preserving in every way, thought, and deed her treasured chasteness and repentance.

Not finding her there, Theophilus felt very sad and wept. He took up the composition that lay on the table and read what this distinguished woman, who had nearly become his bride, had written. When he was done reading, he sat and added one line to the hymn. The line attributed to the Emperor is the line, “those feet whose sound Eve heard at dusk in Paradise, and hid herself for fear.” After he had left, Cassiani returned to finish her work.

And thus, by God’s beautiful, elegant, and exceedingly wise design, Cassiani became not the empress but the author of a hymn that stirs us even today with its deep repentance, humility, and profound immersion in an incorruptible love that saves all mankind—the repentance of the harlot become myrrh-bearer, written by a chaste virgin.

Listen to the Hymn of Cassiani in Byzantine special melody:

(by Cassiani the Nun)

The woman who had fallen into many sins, perceiving Thy divinity, O Lord, fulfilled the part of a myrrh-bearer; and with lamentations she brought sweet-smelling oil of myrrh to Thee before Thy burial. “Woe is me,” she said, “for night surrounds me, dark and moonless, and stings my lustful passion with the love of sin. Accept the fountain of my tears, O Thou who drawest down from the clouds the waters of the sea. Incline Thine ear to the groanings of my heart, O Thou who in Thine ineffable self-emptying hast bowed down the heavens. I shall kiss Thy most pure feet and wipe them with the hairs of my head, those feet whose sound Eve heard at dusk in Paradise, and hid herself for fear. Who can search out the multitude of my sins and the abyss of Thy judgments, O Savior of my soul? Despise me not, Thine handmaiden, for Thou hast mercy without measure.” Holy Week in Hymns. Great and Holy Thursday. The Last Supper (with audio)

Holy Week in Hymns. Great and Holy Thursday. The Last Supper (with audio)
This kind of Liturgy is reserved for the major feasts of the Lord, but on Holy Thursday we are additionally reminded of Judas’ betrayal at the Last Supper in the upper room, as he dipped his bread into the wine and gave his Master a kiss. This is to instruct us that we must flee Judas’s example and cleanse our conscience through the sacrament of confession before daring to receive Communion of the Holy Mysteries of Christ.

Lorna Mcwilliam3/20/2017 8:09 pm
Hello again
I would like to find a copy of the music for this version of
The Hymn of Cassini Aposticha, Tone 8
We would love to sing it this Pascha for Holy Week at our Church
Saints Constantine & Helen Greek Orthodox Church in
Webster, Massachusetts U.S.A.
please let me know where I could find it or could you
forward me a copy.
God Bless You
Lorna McWilliam
Sts Constantine & Helen Greek Orthodox Church
Lake Parkway
Webster, Mass USA
my personal email
lmcwilliam7@me.com
lmcwilliam@charter.net

Lorna Mcwilliam2/14/2017 6:39 pm
Hello
I am a Greek Orthodox Christian who was Christmated March 6 2011
My chosen saint is St.Cassiani.
I have been looking for the music to The Hymn of Saint Cassini for a while now
and am wondering how can I get a copy of this music.
I sing in the choir at Sts. Constantine & Helen Greek Orthodox Church in Webster Massachusetts. Can you help me find this or give me information on where
I can purchase it.
Sincerely
Lorna McWilliam
×