Saint John Chrysostom on the Truth of the Resurrection 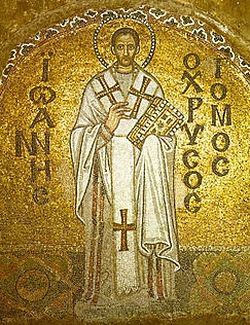 Seest thou how they labour for the truth against their will? For they themselves came to Pilate, themselves asked, themselves sealed, setting the watch, so as to be accusers, and refuters one of another. And indeed when should they have stolen Him? on the Sabbath? And how? for it was not lawful so much as to go out. And even if they transgressed the law, how should they have dared, who were so timid, to come forth? And how could they also have been able to persuade the multitude? By saying what? By doing what? And from what sort of zeal could they have stood in behalf of the dead? expecting what recompense? what requital? Seeing Him yet alive and merely seized, they had fled; and after His death were they likely to speak boldly in His behalf, unless He had risen again? And how should these things be reasonable? For that they were neither willing nor able to feign a resurrection that did not take place, is plain from hence. He discoursed to them of a resurrection, and continually said, as indeed these very men have stated, "After three days I rise again." If therefore He rose not again, it is quite clear that these men (having been deceived and made enemies to an entire nation for His sake, and come to be without home and without city) would have abhorred Him, and would not have been willing to invest Him with such glory; as having been deceived, and having fallen into the utmost dangers on His account. For that they would not even have been able, unless the resurrection had been true, to feign it, this does not so much as need reasoning.

For in what were they confident? In the shrewdness of their reasonings? Nay of all men they were the most unlearned. But in the abundance of their possessions? Nay, they neither had staff nor shoes. But in the distinction of their race? Nay, they were mean, and of mean ancestors. But in the greatness of their country? Nay, they were of obscure places. But in their own numbers? Nay, they were not more than eleven, and they were scattered abroad. But in their Master's promises? What kind of promises? For if He were not risen again, neither would those be likely to be trusted by them. And how should they endure a frantic people. For if the chief of them endured not the speech of a woman, keeping the door, and if all the rest too, on seeing Him bound, were scattered abroad, how should they have thought to run to the ends of the earth, and plant a feigned tale of a resurrection? For if he stood not a woman's threat, and they not so much the sight of bonds, how were they able to stand against kings, and rulers, and nations, where were swords, and gridirons, and furnaces, and ten thousand deaths by day, unless they had the benefit of the power and grace of Him who rose again? Such miracles and so many were done, and none of these things did the Jews regard, but crucified Him Who had done them, and were they likely to believe these men at their mere word about a resurrection? These things are not, they are not so, but the might of Him Who rose again brought them to pass.

A Day in the World of St. John Chrysostom
Priest Ioan Valentin Istrati
We live in a changing world. All around are life, death, the past, and old age, passing on from one stage to the next. People become what their parents were, children grow into youths and then into adults, the elderly depart to the earth, and all are pitilessly stalked by the specter of death. Saint John Chrysostom for the 21st Century
Fr. Josiah Trenham
The Supreme Importance of Churchmanship in an Age of Radical Individualism. Saint John taught that the &#954;&#959;&#953;&#957;&#969;&#957;&#959;&#943;&#945; of the Church is a profound miracle. Whence is the origin of the Church? From where did our sacred community arise, brothers and sisters? It has no mere human foundation. The apostles did not simply gather together and come up with the idea of this organization, with certain goals, members, and dues. Not at all. The Church is the continuation of the miracle of the Nativity of Christ.

The Nativity Sermon of St. John Chrysostom
St. John Chrysostom
Bethlehem this day resembles heaven; hearing from the stars the singing of angelic voices; and in place of the sun, enfolds within itself on every side, the Sun of justice. And ask not how: for where God wills, the order of nature yields. For He willed; He had the power; He descended; He redeemed; all things yielded in obedience to God. This day He Who is, is Born; and He Who is, becomes what He was not. For when He was God, He became man; yet not departing from the Godhead that is His. Nor yet by any loss of divinity became He man, nor through increase became He God from man; but being the Word He became flesh, His nature, because of impassability, remaining unchanged.
Comments
×