Patriarch Irinej of the Serbian Orthodox Church on Wednesday sent his Easter message to all Christians and said that he is particularly praying for the brothers and sisters in the Middle East and Ukraine, with the wish that his prayer and the Easter holidays enlighten the minds of hate-mongers against the Holy Orthodoxy. 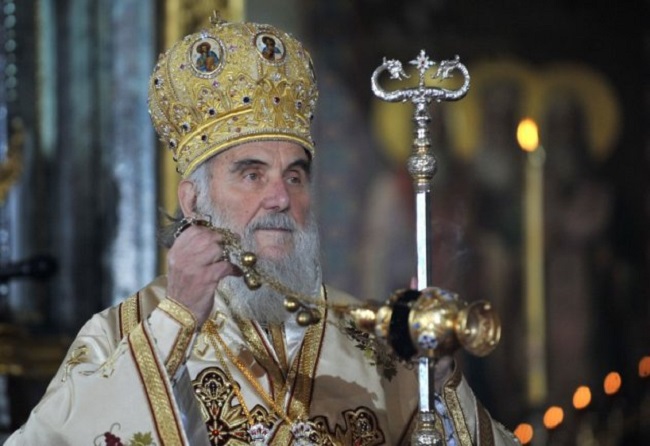 The patriarch sent special greetings to the suffering brothers and sisters in Kosovo-Metohija, who, although shackled down by non-freedom, deprived of their rights and discriminated against, celebrate Easter as the victory of good over evil, life over death and the victory of the resurrection of Christ over the demonic forces of the darkness.

“With the same love in the resurrected Christ and warm prayers, we also send greetings to all our brothers and sisters in Dalmatia, Lika, Kordun, Banija, Slavonia and Baranja,” the patriarch said.

He sent the traditional Serbian Orthodox Christian greeting “Christ is risen” to the believers of the Serbian Orthodox Church in Republika Srpska, Bosnia and Herzegovina, Montenegro, Slovenia, as well as those in the Former Yugoslav Republic of Macedonia who, guided by the unjustly imprisoned Archbishop Jovan, are suffering for the unity of the church and purity of the Orthodox faith.

This year, the Easter celebrations for believers of the Serbian Orthodox Church and all Orthodox churches worldwide will coincide with those in the Western Christian nations.

The Orthodox churches celebrate Easter after the Jewish Passover – as a result, Western and Eastern Christians celebrate the greatest Christian holiday on different days if it coincides with the Jewish holiday, which is not the case this year.

All Orthodox churches worldwide invariably celebrate Easter together, demonstrating their affiliation to the Christian Orthodox dogma Paschal Greeting from the Abbot of Sretensky Monastery
Archimandrite Tikhon (Shevkunov)
“We celebrate the death of death, the destruction of hades, the beginning of another life eternal, and leaping for joy, we hymn the Cause, the only blessed and most glorious God of our fathers.” PASCHAL MESSAGE by His Holiness Patriarch Kirill of Moscow and All Russia
As we celebrate this ‘Feast of feasts and Triumph of triumphs,’ it is with a special spiritual feeling that we recall the redemptive act of the Saviour of the world, his sufferings on the Cross and bright resurrection. Pascha is not some beautiful legend, not some theoretical theology and not a nod towards a popular custom established in the distant past. It is the essence and kernel of Christianity. It is the victory that God has granted to us. A Paschal Homily of Blessed Justin of Chelije
St. Justin Popovic
Man sentenced God to death; by His Resurrection, He sentenced man to immortality. In return for a beating, He gives an embrace; for abuse, a blessing; for death, immortality. Man never showed so much hate for God as when he crucified Him; and God never showed more love for man than when He arose. Man even wanted to reduce God to a mortal, but God by His Resurrection made man immortal. The crucified God is Risen and has killed death. Death is no more. Immortality has surrounded man and all the world.
Comments
×