His Holiness Patriarch Kirill: “One of the most important concerns of our Church today is prayer and work for a resolution to what is currently happening in the Ukraine” 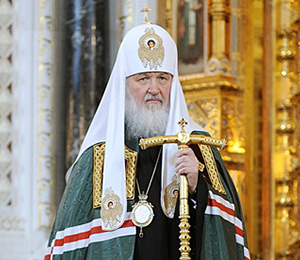 The Church’s task is to make peace between people, and therefore it must not serve any political views or take sides in civic disputes, His Holiness Patriarch Kirill of Moscow and All Russia announced.

“One of the most important concerns of our Church today is prayer and work for a resolution to what is currently happening in the Ukraine. We take to heart the complicated situation and real suffering that people are experiencing in the Ukraine,” the Patriarch said before the commencement of the Supreme Ecclesiastical Council, which was held on April 30 in the Christ the Savior Cathedral, Moscow.

His Holiness said, "The Church must conduct pastoral work for the care of souls, pray, and make peace between people; but under no circumstances must it serve one or another political view, position, or concept.” This allows the Church to remain outside of a conflict, and carry on its work of bringing peace between the conflicting sides.

“Our principle point of view is that the Church must be above any [civic] convulsions. The Church must preserve its peace-making potential even when it seems to everyone that no peace-making potential could possibly exist. This is a complicated position, because every person who shares one or another point of view, and enters into a civic conflict, always tries to get support for it from the Church. But the Church can and must give its support exclusively within the boundaries of what the Lord has entrusted it to do,” said the Patriarch.

“What is now happening in the Ukraine is testimony to the fact that only our Church actually takes that position,” His Holiness added. “Practically all the others have shown themselves to be caught up in these events and have lost the steadfastness that comes from a precise, honest, and systematic fulfillment of the Church’s calling.”

“You know that our Church’s position remains the same as it has been over the course of last nearly twenty-five years. When there was civic confrontation in Russia, in the city of Moscow, and when similar conflicts arise on the territory of post-soviet space, our Church has not given in to any political temptations and refuses to serve any political stances,” the Patriarch emphasized.

“It is very difficult for the Church in these circumstances,” he continued. “I recall the criticism directed at our Church during the early 1990s, when people were demanding that the Church go out to Manezh Square,[1] that it definitely make political statements in support of the ones who came out as the winner… But the Church as a whole rejected such a stance, although it was severely criticized by those who had as if won. Life has shown that this was the only correct stance, because both the right and the left belong to the Church.”

The Patriarch called upon the members of the Supreme Church Council to apply every effort, so that “peace might descend upon the Ukrainian land, so that people would make peace with each other, so that law and order would be restored, and so that people’s rights be provided for and their dignity upheld untrammeled.”

“In several statements regarding the Ukraine, we have expressed our concern and caution in connection with the possible seizure of church buildings belonging to our Church,” the Patriarch noted.

“As we know, there have been such attempts, but by God’s mercy they were unsuccessful, and we can state that there are no seizures taking place today. May God grant that this should remain so, because the use of force always leads to counterforce, which means the fomenting of conflicts,” said His Holiness in conclusion, noting also that any aggravation of religious conflict would bring extreme complications into an already very difficult situation in the Ukraine.

Press Service of the Patriarch of Moscow and All Russia

Blood is again being shed in Ukraine. The clashes in the Donetsk Region and tragic events in Odessa have led to the death of dozens of people and further destabilization of the situation in the country. Many are in despair and fear for their lives and the lives of their loved ones.

In this hardest of times, my heart is with Ukraine, with each of her sons and daughters who are in pain, grief, anger and despair. I am praying that all the victims of the bloodshed may rest in peace, that the lives of the casualties may be saved, and that the injured may recover as soon as possible. My ardent prayer is for the healing of the country and pacification of the enmity, so that blood may not be spilt again and violence may be stopped forever.

Responsibility for what is going on lies first of all with those who resort to violence instead of dialogue. Special concern is raised by the use of military hardware in a civic confrontation. The use of force is often provoked by commitment to political radicalism and the denial of citizens’ rights to express their convictions.

In the situation of today’s Ukraine, there cannot be only one political position declared the only one possible and obligatory for all. It is pernicious to the country. It is my conviction that attempts to assert one’s own point of view by force should be abandoned once and for all. I appeal to all the parties to restrain themselves from the use of arms and to settle all problems through negotiations. In a short-term perspective, Ukraine needs at the least reconciliation, and in the long-term—a lasting and inalienable peace.

Ukraine can be healed and can take the path of building a dignified life for her citizens only if it becomes a common home for people of various political beliefs who differ from one another in many things. There is no alternative to dialogue. Dialogue is necessary while it is still possible to have it; people must hear one another, and try not only to resolve today’s contradictions, but also to renew the commitment to Christian spiritual and moral values, which have formed the Ukrainian people and enriched them with wisdom and love of truth. I trust that precisely these values will help them today to find a path to peace and justice, without which it is impossible to imagine a dignified future for that country.

O God, one and great, preserve Rus’, the Ukraine!

To His Eminence Agafangel, Metropolitan of Odessa and Izmail

The horrific news about the people burned to death in the House of Trade Unions in Odessa has most strongly affected me and pierced my soul with the deepest pain. A terrible crime, which neither heart nor mind can endure, has been committed in view of the whole world.

The tragic developments in Odessa have resulted in the death of dozens of people. Millions are suffering grief and despair. People fear for their relatives and for their life, as well as for the future of their country.

My heart is with you, Vladyka, with your flock, and with Odessa, which is mourning over her children, as well as with the Ukrainian Orthodox Church, with all those who day after day call for peace and to end of the violence in Ukraine.

I lift up my ardent prayer to God for the repose of souls of the dead, for the survival of those, whose lives the doctors are fighting to save, and for the recovery of the injured. I also pray for the salvation and healing of Ukraine, for the cessation of bloodshed, and reconciliation of enemies. I pray for the people of opposite political positions to be able, by God’s mercy, to hear one another and to realize that any attempts to impose one’s opinion on the other by force only lead to the death of that beautiful, blessed county.

May this terrible ordeal, which occurred during the radiant Paschal days, strengthen us in our commitment to follow the path of our saints—St. Vladimir, Equal-to-the-Apostles, St. Sergius of Radonezh, the saints of the Lavra of the Caves in Kiev, St. Seraphim of Sarov, numerous new martyrs of the Russian Church, and St. Kuksha of Odessa. May it strengthen us in our adherence to those Christian and moral values that alone can help save the people of Ukraine.

Let us find strength and consolation in the good tidings that Christ the Savior has conquered death, falsehood, and enmity, and that the doors of hell will not prevail against His Church.

I am praying for the repose of souls of the dead, for the recovery of the wounded, and for the re-establishment of truth and peace in this old city, known for its traditions of harmonious life of people of different faiths, beliefs, and nationalities.

I ask you to convey my heartfelt condolences to the relatives and friends of those who have died a terrible death in the burning House of Trade Unions. May this horrific tragedy, reminding us of the most terrible pages in the history of humanity, never happen again.

Those, who are guilty of killing their fellow citizens, and those, who profaned shrines in the destroyed prayer tent, must be found and incur rightful punishment. I consider it a matter of great importance.

May the Lord grant His mercy and His wise guidance to all the citizens of Odessa.

[1] This refers to the unrest in Moscow that led to the overthrow of Gorbachev’s government and brought Boris Yeltsin to power. The number of people who lost their lives in that conflict has still not been decisively disclosed.
See also Prayers for peace and stopping of hostility in Lugansk Before Easter His Holiness Patriarch Kirill offered up a prayer for the Ukraine
After the Liturgy of Great Saturday, served on April 19 at the Cathedral of Christ the Savior in Moscow, His Holiness delivered his patriarchal speech to the faithful. Russian Orthodox Church will do whatever it can to preserve fraternal relations between Russia and the Ukraine
"The Holy Synod has stressed that Crimea has been and remains an integral part of our one, multinational Church," said V. Legoida. A Lenten plea for peace