St. Comgall, who is celebrated as one of the most illustrious monastery founders in the sixth century Ireland, was born in c. 516 in the Irish province of Ulster. There is a suggestion that he was born near the present-day hamlet of Magheramorne in Antrim in Northern Ireland. His father’s name was Setna and his mother’s, Briga. 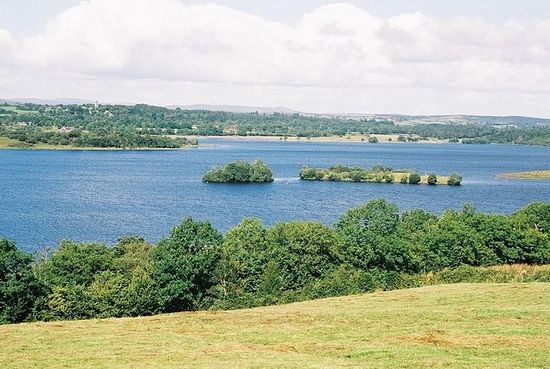 A view over Lower Lough Erne

In his youth the future saint served as a soldier but then gave up military service. After studying under St. Fintan of Clonenagh, where he was ordained priest, Comgall settled on an island in Lough Erne in Fermanagh as a hermit. There he lived in extremely austere conditions, devoting all his time to prayer to God. At first several other ascetics lived with Comgall, but they soon left him as they could not live in such harsh conditions for long. St. Comgall also probably lived for a time in Clonard Monastery under St. Finnian and in Clonmacnoise under St. Ciaran (Kieran). 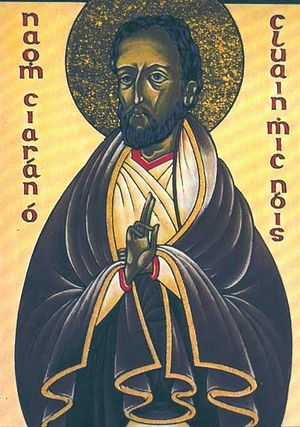 This period of ascetic life and contemplation prepared the saint to fulfill the main task of his life: the foundation in the year 558 (or, according to later sources, 552) of the great monastery of Bangor (“Benchor”), situated to the east of Belfast. This large and famous monastery was located on the southern shore of the bay of Belfast Lough in present-day County Down in Northern Ireland. St. Comgall introduced a very austere discipline into his monastery. In spite of all his austerity, it is said that around 30,000 monks and disciples followed him in this monastery in Bangor over the following centuries. 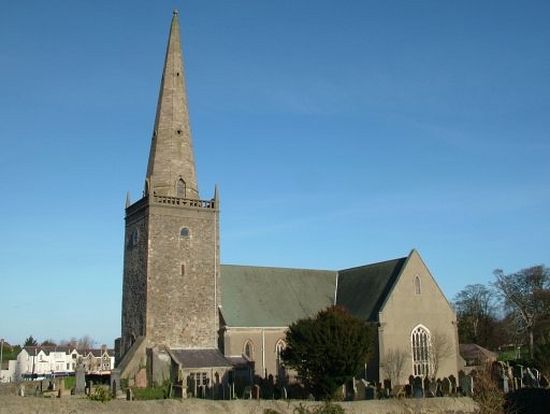 A seventh century source relates that the rule of the Bangor Monastery was strict, holy and unchangeable, and that the community lived in the hope of salvation and perfect love. St. Comgall’s rule paid particular attention to love for Christ the Savior and disdained material riches. Unceasing prayer and continuous fasting were practiced in the monastery. The brethren ate only once a day and that mainly consisted of herbs, bread and water; even milk was considered a luxury. They practiced public confession in the presence of the whole community and severe penances were not a rarity. Silence was encouraged by the monastic rule, especially during meals, and all conversations were restricted. The brethren devoted themselves to different kinds of manual labor as well.

It is recorded that each day the monastic community celebrated a Divine Liturgy, public prayer lasted in all for seven hours and they had two services in the day and three at night. Worship was central to the life of the community. And in addition to this, groups of monks, singing psalms in chorus, took turns several times a day so that the singing did not stop in the monastery even for a single minute. According to tradition, this practice existed at Bangor until its closure. In the seventh century, missionaries brought this practice of singing to other European countries, and on the basis of these hymns and psalms in the same century "The antiphonary of Bangor" was compiled, a copy of which has survived to this day. 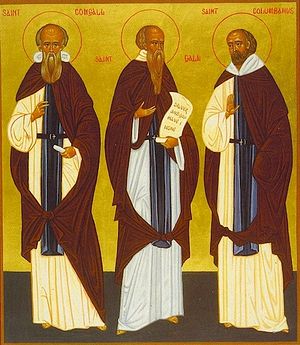 By the time of St. Comgall's repose it is said that no fewer than 8,000 monks lived in Bangor, many of them coming from various countries on the Continent. Bangor became the largest and one of the most influential Irish monastic establishments. Bangor was a distinctive prototype as a center of a group of monasteries and a center for missionary work. Many contemporary saints like St. Columban (the great founder of the monastic centers in Luxeuil in France and Bobbio in Italy), considered St. Comgall to be their spiritual father. It was from this monastery that Sts. Columban and Gall set out on their famous and most successful missionary journey to the Continent—to France, Switzerland and Central Europe; from here St. Moluog left for Scotland to found his renowned monastery on the island of Lismore, and St. Maelrubha for his great monastery in Applecross. Among the disciples of St. Comgall we can also name Sts. Blane, Deicola, Carthach Mochuda of Rathin and Mochoemoc. 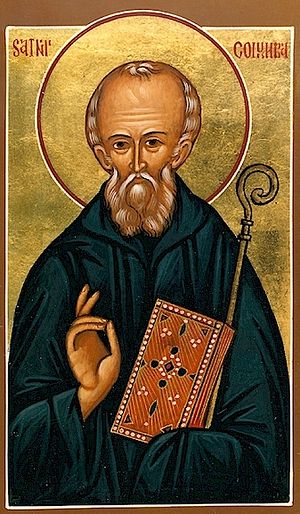 According to tradition, once St. Comgall visited St. Columba on the island of Iona in Scotland, accompanying him on his journey to the Pictish king Brude and preaching the Gospel, probably founding another monastery there. Among St. Comgall’s friends were such great ascetics as St. Kenneth of Agaboe and Kilkenny, St. Brendan the Navigator of Clonfert, St. Finnian of Moville and St. Cormac.

Bangor was not the only monastery St. Comgall founded, as there were others founded by him in Ireland; for example, Cell-Comgail. He was also regarded as a wonderworker, healing people from blindness and other ailments. However, on one occasion, due to the saint’s intercession, thieves who had stolen vegetables from the monastery suddenly became blind, but as soon as they repented they were allowed into the community. Another story says that by St. Comgall’s prayers a greedy farmer who refused to sell part of his grain to the brethren was punished by a plague of mice, which ate all of it. Another time the monks were short of fish before the arrival of guests, but the saint prayed and at once a whole school of fish swam up to the shore, so that all the visitors were treated.

St. Comgall, Abbot of Bangor, reposed in the Lord after a long and acute sickness in the year 601, aged about 85. Before his death he was given communion by St. Fiacre, who had been warned by an angel of the saint’s approaching death.

There is one excellent and famous expression of St. Comgall on the occasion of repose of his spiritual father, or "soul friend", as Celtic ascetics then used to say: "Now I, as all of you, am headless, because one without a spiritual father is like a body without a head".

St. Comgall supposedly lived for some time in Wales, where he established a monastic community, and in Cornwall and Scotland, working in holiness and training numerous monks. Some claim that he was a bishop. 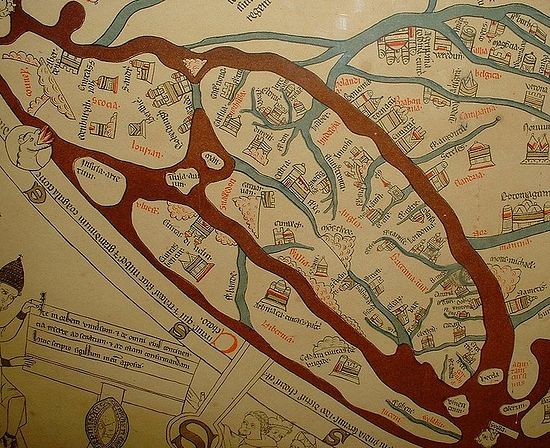 St. Comgall is venerated as one of the greatest confessors, spiritual fathers and ascetics of his age. The biographer of St. Columban, Jonah of Bobbio, wrote the following of St. Comgall: "He was a great father of monks in Ireland, noted for his perseverance in teaching and strict discipline." St. Comgall was venerated all over Ireland. On account of its monastery, Bangor was one of four Irish towns mentioned in the world-famous "Mappa Mundi" ("The map of the world"), created in Hereford in c. 1300. This unique map, one of the earliest medieval maps of the world, is kept at Hereford Cathedral in England as a precious relic to this day.

In spite of frequent Viking raids, the monastery continued to send out missionaries to European countries. Bangor was described as one of "the lights of Celtic Christianity"—"a light to the world", on a level with Iona in Scotland, Mynyw in Wales and several others.

Bangor in Ireland should be distinguished from two other monasteries with the same name, which existed from the sixth century in north Wales and were very famous. Owing to Bangor’s influence there was a saying in medieval Europe that, "If someone knows Greek, then he or she is surely from Ireland". So great was knowledge at Bangor and monks from Bangor were often mentioned in medieval European literature. 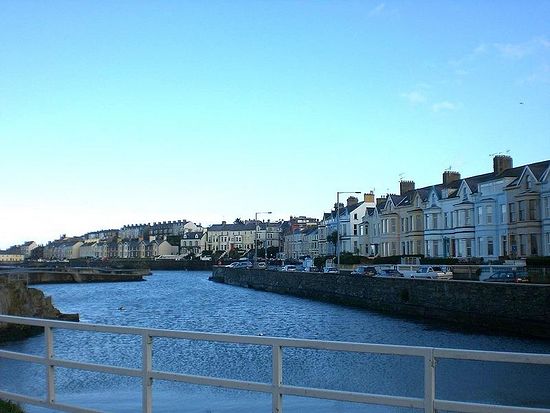 Bangor and the Bangor Bay

Today, Bangor is a pretty town in County Down. Very little remains of the ancient monastery of St. Comgall. After being ravaged by the Vikings in the ninth century the monastery was reestablished in the twelfth century by Catholics, and it belonged to Augustinians and Franciscans at different times. The monastery was dissolved in the early seventheenth century. At the present time Bangor Abbey is used as a parish church and belongs to the Church of Ireland. In the church an image of Christ ascending to Heaven with Sts. Comgall, Columban and Gall can be found. Very little survives of the former monastic buildings apart from a refectory wall. The names of some streets in the town contain the word "Abbot" and other Church-related words, reminding one of the Christian past of the great monastery.

Venerable Father Comgall, pray to God for us!

Venerable Finnian, Abbot of Clonard
Commemorated December 12/25
Dmitry Lapa
The disciples of Clonard established hundreds of churches and monasteries in Ireland as well as in other countries. According to a custom which existed in Clonard, every monk who left the monastery as a missionary took with him a copy of the Gospels, a crozier and some holy object and later, when building his own church or monastery, placed these relics inside it.
Comments

Charles Horning12/9/2020 9:45 pm
Hello, I am looking for source material for these insights. I am looking for some sort of academic work or historical books that I can use to reference these stories of this great saint. As of yet I have not found anything substantive I can point to. Thanks for any books or information you can give me. p.s.

Bruce M Coyle6/28/2020 4:51 pm
I would very much like to know so much more about St.Comgall . As it is said my ancestors were followers of this great man. Why were so many drawn to him and his teachings ? And maybe ,I might find Why my family was so loyal to him . Thank you for your time. Sincerely Bruce M. Coyle
×