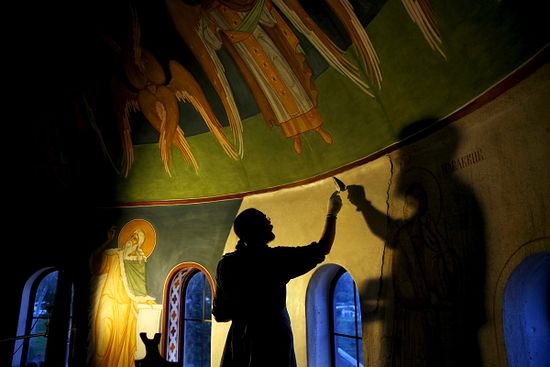 Just before dawn, Father Moses Fredricks smooths plaster in preparation for the fresco painting of the Prophet Joel on the dome at St. Seraphim of Sarov Orthodox Church.

Walking into Saint Seraphim of Sarov Orthodox Christian Church in southeast Santa Rosa is like stepping back in time. 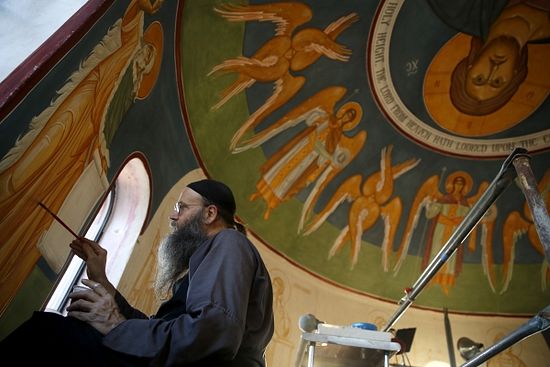 Father Patrick Doolan adds the finishing touches to a fresco painting of the Prophet Elias.


The cross-shaped building is reminiscent of ancient European cathedrals and Eastern Orthodox churches, with pillars, altar and dome. But since July, its center has been filled with modern scaffolding that supports Father Patrick Doolan and Father Moses Fredricks as they fill the dome with a fresco of Christ, angels and prophets.

The monks hope to be finished in late July, completing a project that has taken more than a decade to plan, finance and prepare. It’s the most expensive of the frescoes envisioned for the church on Mountain View Avenue.

The fresco project is the largest, and maybe the only, project of its kind in a Christian Orthodox Church in the United States. Just the dome project will cost $112,000, financed with a $50,000 bequest and a fundraising campaign that continues after 15 years.

Fredricks and Doolan have worked on and off since overseeing the first layers of special plaster 10 years ago, taking measurements, drawing sketches and completing many frescoes on the church’s interior walls. 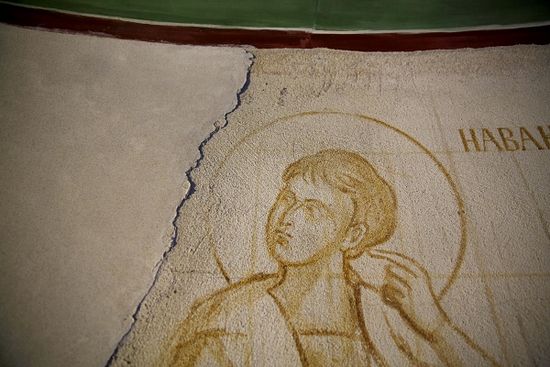 A rough sketch of the Prophet Habakkuk before being covered by a smooth layer of plaster and then painted.


Once the dome scaffolding went up last year, they began by sketching the scene directly onto the dome’s first layers of plaster. Then they parted the scaffolding to look at their work from below and scratched out the sketch to redraw, adjusting for size until they got the scale right. Prior to beginning the actual fresco painting, they took tracings of each section.

Because frescoes must be painted on freshly laid plaster, Fredericks works at night to lay plaster for the portion they will work on the following day. Around 6 a.m., they begin painting the life-sized figure for that portion of the fresco, often working until midnight.
At the center of the 12-foot-wide dome is the icon of Christ, which was done in six sections.

Doolan said painting over your head is not easy. “We don’t lie on our backs.”

Neither did Michelangelo when he painted the ceiling of the Sistine Chapel. Michelangelo even wrote a poem about the rigorous task and the toll it took on his posture.

A fresco (Italian for fresh) is often confused with a mural, which can be painted with and on any medium. Frescoes are painted only on freshly laid plaster as it sets.

Fresco painting is an ancient technique that was commonplace in medieval times but has been largely abandoned, especially in the U.S.
Fredricks said that’s because they are hard to do, fewer people know how and it takes longer, requiring a great deal of preparation. In medieval times, church walls often were made of stone or brick, which could be plastered.

“Modern construction techniques don’t lend themselves to frescoes like the old ones did,” he said.

One of the benefits is that fresco lasts longer than other kinds of paintings. The fresco in the Sistine Chapel is still vibrant today, for example, while an oil painting of the Last Supper done about the same time is quite faded, Doolan said.

“These frescoes will last as long as the building,” he said, referring to those he is applying.

St. Seraphim of Sarov was established in 1936 by about 20 Russian families who fled the advancing army of the Bolsheviks. The new church was built in 1996, with plans to cover its walls with frescoes.

“Longevity isn’t the reason for doing them, though,” Doolan said. “It’s for the beauty, the beauty of the colors, the resonance of color, the quality.

“We do it for the results,” added Fredricks.

The Orthodox church has a 2,000-year tradition of iconographic dome paintings. Christ takes the highest, most central point and is encircled by a ring of angels and seraphim, followed below with a ring of Old Testament prophets.

During the past year, while Doolan and Fredricks have been painting the Pantocrator (Greek for “ruler of all”) in the dome, church life has gone on as usual around the scaffolding.

On average, 220 people gather each week to worship and to celebrate weddings, funerals and baptisms. How Iconostases are Made
The story in pictures of a workshop in the ancient artisan city of Palekh
With the help of art photographer Vladimir Eshtokin let’s visit one Palekh workshop. Icons: A Lesson in Humility
The painting of Orthodox icons is an exercise in humility, says artist Lino Wong Wing-kuen, and one rooted in an artist’s spirituality.