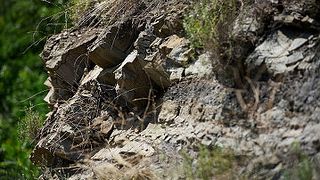 Workers of a road brigade in Ingushetia have discovered an ancient cave after a landslide, which may contain either treasures of the capital of Alania or tomb of the Georgian queen Tamar, reported deputy director of E.I. Krupnov’s Archaeological Centre UmalatGadiev to RIA-Novosti.

According to preliminary information, during construction of the road to the international “Mountain tournament” venue an earth slide occurred. During the clean-up entrance to a rock cave was exposed, faced with dressed masonry. Such caves in the mountainous Ingushetia were discovered before as well. They date back to the 9th-14th centuries,” he said.

According to Gadiev, it can be supposed that the discovered cave, or, in other words, the burial vault, became the resting-place of the Georgian queen Tamar. It can also be suggested that in the same cave the treasures of Magas—capital of the ancient state of Alania—were hidden.

“It is still difficult to confirm anything since it is just a famous tradition, and serious research work has not been carried out yet. After excavations and a number of examinations we will be able to speak with confidence,” stressed the archaeologist.

Alania was a medieval state on the territory of North Caucasus which was inhabited by nomadic Persian-speaking tribes of Scythian-Sarmatian origin. It lost its independence after the Mongol-Tatar invasion in 1238-1239.

Holy queen Tamar of Georgia, whose reign (1184 - 209/1213) was known as “The golden age” of Georgian culture, devoted much attention to foreign policy, expansion of boundaries of the state, which stretched from Pontus to Gurgan (the Caspian sea), from Sper to Derbent, Khazaria and Scythia. She secured in that time a dominant position for Georgia in all Asia Minor. Tamar took care for the spiritual life of the people, built churches, gave alms, and helped the poor. She was considered one of the most venerated woman-rulers of Georgia. The Georgian Orthodox Church canonized her and Catholicos-Patriarch Ilia II of All Georgia declared the year 2013 “the year of queen Tamar”. Bone relic in Goa church might be from Georgian Queen: DNA study
The first ancient DNA study in South Asia has revealed that a 400-year-old bone relic kept in St. Augustinian Church in Goa is likely to be a remnant of Queen Ketevan of Georgia, who was born in a royal family in 1565 in the medieval period.