Over 200 were killed in Odessa tragedy, leader of the Ukrainian Union of Orthodox Citizens claims 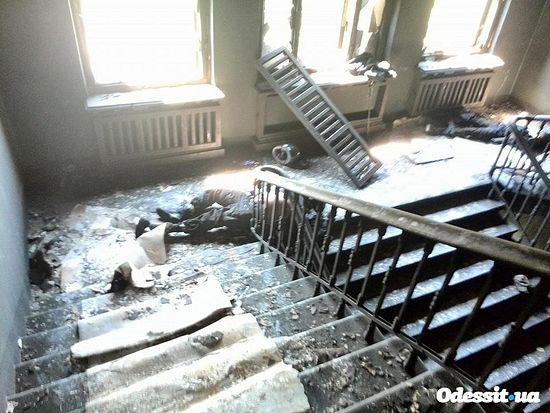 The number of victims perished in Odessa tragedy on May 2 is underestimated, leader of the Union of Orthodox Citizens of Ukraine Valery Kaurov claims.

"Over 200 people were killed. Unnamed grannies with icons who were on the square at that moment, they were commanded to enter the building, but they never left it. My guys then found ladies' bags in the site of fire. Their owners were registered neither in mortuaries nor in hospitals," Kaurov said in his interview published by the Moskovsky Komsomolets website.

Earlier he left Odessa as he was subjected to persecutions from the law-enforcement agencies. On April 20, Easter, the People's Council was held in Kulikovo Field in Odessa, which announced setting up the Novorossia Republic and Kaurov was elected its representative to Moscow.

"On May 2, I was permanently connected to commandant of our camp, Orthodox Soviet officer Alexander Ivanovich Yakimenko. When they understood that ultras and fascists were going from the center of the city to the Trade Union House, my lads started building barricades from bags with sand and litter bins. Some of them managed to escape through the park, and some, including Yakimenko, went to the Trade Union House. They all hoped for the help of militia, but militia just smoked and were indifferent to the things happening," Kaurov said.

"Our officers broke the doors opened and commanded: "to the shelter!" Those who were on the roof survived, they came down only when they were promised not to be killed. I believe that provocateurs were introduced to the camps in the Kulikovo Field, they destabilized the situation. Everything was prepared beforehand, the aim was to change authorities in Odessa, not only to defeat anti-Maidan," he said.

According to official data, during mass disorders in Odessa on May 2, 48 people were killed, over 200 were injured. Investigation into Odessa tragedy continues as new details emerge
The shocking events of May 2 in the Ukrainian port, in which at least 46 people were killed, continue to be the most discussed topic not only in the Ukrainian, but also the Russian mass media. The background to the incident is now becoming clearer as video footage and eyewitness accounts surface, but many questions remain unanswered.