Orthodox believers collect 100,000 signatures to back up ban on abortions 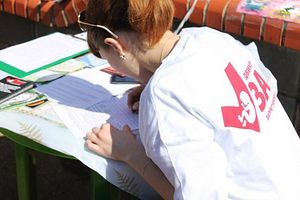 "People signed petition not only for absolute legal ban on abortions including medically prescribed ones, but also for banning abortive contraception such as coils and medical hormonal agents," Chesnokov, who also heads social movement FOR - banning abortions, told Interfax-Religion on Thursday.

He reminded that abortions are banned in Hungary, Spain, Ireland, and Poland.

60 dioceses of the Russian Orthodox Church, starting from May 29, will conduct prayer services and various actions on the problem of abortions. Christian activists gather enough support to launch bill banning abortion
A group of Orthodox Christian activists claim that they have gathered 100,000 signatures under a petition seeking to completely ban abortions in Russia – a number enough to make it a valid legislative initiative. Annual all-Church anti-abortion action to take place on June 1
With the blessing of Bishop Ignaty of Vyborg and Priozersk, head of the Youth Affairs Department, events aimed at counteraction against abortion and the popularization of family values will take place all over Russia. The action will be timed to coincide with the Children Defense International Day. ‘He killed my baby, he killed my baby!’: The day I lost my daughter to the Culture of Death
It was two days before my seventeenth birthday, a Saturday morning, the day after a football game in which I’d played. So I was tired and sore, but I could smell breakfast coming from downstairs and somebody was walking up the stairs. I was half asleep. The door opened: it was my girlfriend, I smiled, of course—but from the look on her face I could see that this wasn’t called for. This was a serious moment. I steeled myself. EU pro-life petition surpasses 1.8 million signatures
The One of Us pro-life group's petition states that "the EU should establish a ban and end the financing of activities which presuppose the destruction of human embryos".
Comments
×