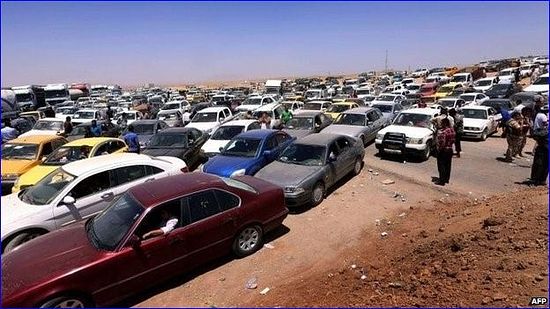 Many Nineveh residents fled to Kurdish-controlled northern Iraq on Tuesday

The government of Mosul, Iraq's second largest city, fell overnight to the jihadist Islamic State of Iraq and Levant, also called the Islamic State of Iraq and Syria (ISIS). Mosul's panic-stricken Christians, along with many others, are now fleeing en masse to the rural Nineveh Plain, according to the Vatican publication Fides. The border crossings into Kurdistan, too, are jammed with the cars of the estimated 150,000 desperate escapees.

The population, particularly its Christian community, has much to fear. The ruthlessness of ISIS, an offshoot of al-Qaeda, has been legendary. Its beheadings, crucifixions and other atrocities toward Christians and everyone else who fails to conform to its vision of a caliphate have been on full display earlier this year, in Syria.

As Corner readers will remember, in February, it was the militants of this rebel group that, in the northern Syrian state of Raqqa, compelled Christian leaders to sign a 7th-century dhimmi contract. The document sets forth specific terms denying the Christians the basic civil rights of equality and religious freedom and committing them to pay protection money in exchange for their lives and the ability to keep their Christian identity.

Since 2003, Iraq's Christian community has suffered intense religious persecution on top of the effects of the conflict and, as a result, it's shrunk by well over 50 percent. Mosul, the site of ancient Nineveh of the Assyrians, who converted to Christianity in the first century, has become the home of many Christians who remained. Considered by Christians the place of last resort inside Iraq, Mosul and the surrounding Nineveh Plain has been home to many Christian refugees driven out of Baghdad and Basra. Mosul has the only university, the best hospitals, and the largest markets serving the Christian towns and villages of the Nineveh Plain. The plain, itself, is now at grave risk of direct jihadi attacks and the possibility of being cut off from an essential city.

Once upon a time, some of the Mosul Christians might have fled to Syria, but they now have few options. More will give up on the region altogether and join their relatives and former neighbors in Michigan, California, Sweden, and elsewhere in the West. The fall of Mosul is a serious blow for the Iraqi state, and the implications for Iraq's Christian community are devastating.

ISIS now controls the area surrounding Mosul's Catholic Chaldean cathedral. Fides reports that Chaldean bishop Amel Shamon Nona and the other bishops of Mosul launched an appeal yesterday to keep churches and mosques there open to pray for peace. Their perseverance in the face of such peril is heartbreaking. ISIS will not listen, of course. They are not men of peace and they kill those who are, as they did Father Paolo Dall'Oglio in Raqqa last year. These bishops and their flocks should load up their cars and head for the Kurdish border without delay.

President Maliki is vowing that Iraq's army will regain control, but this may take time. ISIS has controlled parts of Ramadi, the capital of Sunni Muslim Anbar province, and much of Fallujah for the past six months. When the army does eventually succeed in reversing jihadi control in Mosul, it may be too late for the Christians. Past patterns show that once Middle Eastern Christians flee to the West, they don't return.

In other words, the religious cleansing of Christians from Iraq is entering the end game.

This is a profound development for the Christian church, of course, which has had a thousand-year-old presence there. But it will have long-term national-security implications for the West. American political leaders have so far failed to distinguish the religious cleansing from its surrounding context of terror and conflict. They overlook the fact that religious pluralism and diversity are among today's casualties. As one Chaldean bishop lamented, "This is very sad and very dangerous for the church, for Iraq and even for Muslim people, because it means the end of an old experience of living together."