The saint who is venerated as the first English martyr 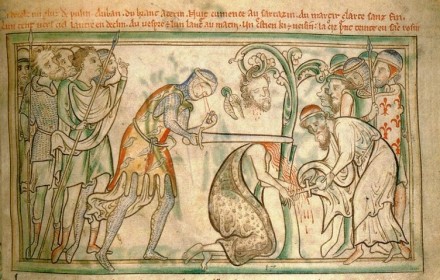 A 13th-century manuscript at Trinity College Library, Dublin, shows the executioner’s eyes falling out as he kills the saint

St Alban is venerated as the first English martyr. He was a Romano-British pagan living in the city of Verulamium sometime during the third or fourth century. During a purge of Christians, Alban shielded a Christian priest, traditionally known Amphibalus, in his home as he fled from Roman soldiers. Alban was so impressed by the priest’s piety that he converted to Christianity.

When the Romans realised Amphibalus’ whereabouts they came to seize him. But Alban, disguising himself in the cloak of Amphibalus, offered himself to the soldier. He was then taken to the pagan temple at Verulamium and presented to the judge. The judge was furious when he discovered that Alban had taken Amphibalus’s place and demanded that Alban renounce Christianity and offer sacrifices to the gods. It was then that Alban spoke the words quoted in the prayer still used at St Albans Abbey: “I worship and adore the true and living God who created all things.” Alban was then scourged and sentenced to death.

On his way to his execution Alban had to cross the River Ver, but it was clogged with a mob of townspeople who wanted to watch the execution. Alban is said to have prayed for a quick death and the river subsequently dried up, allowing Alban and his captors to cross on dry land. When Alban’s executioner witnessed this he fell to his feet and prayed that he would suffer with Alban or be executed. Both the soldier and Alban were beheaded, but as Alban’s head fell to the ground so did the eyes of the second executioner, who killed Alban. The judge who witnessed these events was so moved that he ended the persecution of Christians and began to honour the saints. The place of St Alban’s death is where St Albans Cathedral now stands.

The site of Alban’s martyrdom soon grew popular. In 429, Bishop Germanus of Auxerre visited and reportedly took away relics of the earth which was still bloodied.

St Alban is venerated by Anglicans, Catholics and Orthodox Christians. Every year, on the weekend which falls closest to the time of Alban’s martyrdom, St Albans Cathedral hosts the Alban Pilgrimage, with huge puppets re-enacting the events of his heroic death. Holy Hierarch Birinus, Bishop of Dorchester-on-Thames and Apostle of Wessex
Commemorated December 3/16 (repose) and September 4/17 (translation of relics)
Dmitry Lapa
In 635 the bishop successfully reached the shores of Albion and landed in the port of Southampton on the south coast of Britain, in the Kingdom of Wessex. He intended to go further inland where there were no missionaries, but since he met only pagans in Wessex, he realized that he must remain there. Saint Tbeli Abuseridze (13th century)
Archpriest Zakaria Machitadze
Holy Father Tbeli Abuseridze lived and labored in the 13th century. His father Ioane, the archduke of Upper Atchara, perished in a battle with the Turks. After Tbeli’s mother was widowed, she was tonsured a nun and given the name Ekaterine. Tbeli’s brothers, Abuseri and Bardan, were also well-known figures in their time. Venerable Ekvtime of Mt. Athos, the Translator(†1028)
Archpriest Zakaria Machitadze
Venerable Ekvtime of Mt. Athos was the son of St. Ioane of Mt. Athos, a military commander during the reign of King Davit Kuropalates, who abandoned the world to enter the monastic life.While St. Ioane was laboring on Mt. Olympus, the Byzantine emperor returned a large portion of the conquered Georgian lands, but in exchange for this benefaction he ordered that the children of certain eminent aristocrats be taken to Constantinople as surety.
Comments
×