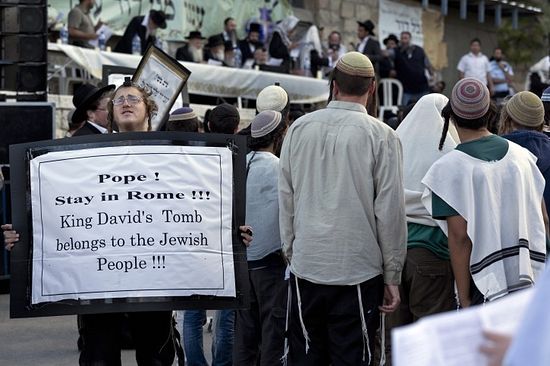 A mob of ultra-Orthodox Jews has occupied the Upper Room, the sacred site of the Last Supper, forcing Christian pilgrims who were gathered there for the feast of Pentecost into a small adjacent room while they danced and prayed.

The incident occurred yesterday afternoon. According to Israeli police sources the group was composed of "about 30" ultra-Orthodox Jews. Moshe Feiglin, a member of parliament in the ranks of the Prime Minister Benjamin Netanyahu's right-wing Likud party, was also among the group.

The Upper Room, where the Last Supper and Pentecost took place, is a room on the second floor of a building near the area of ​​Mount Zion. Since the twelfth century, it's ground floor is also believed to be the site of the burial of King David, although many archaeologists and historians doubt this.

On the last day of his visit to the Holy Land, Pope Francis had permission to celebrate Mass in the Upper Room, together with local bishops and patriarchs.

The site belongs to the State of Israel, which has banned all Christian churches from holding liturgies there. Only John Paul II and Pope Francis have been granted this opportunity.

There had been talk in the past of Israel's signing over the rights of the Status Quo for the Upper Room to the Custody of the Holy Land, which was the original owner of the holy place, before the Ottomans and then the Israelis took it over. 0ffensive and violence graffiti against Christians often appear near the sacred site.

In the days prior to Pope Francis' visit, groups of ultra-Orthodox Jews demonstrated in Jerusalem and Mount Zion, opposing any attempt sign over the holy place to Christians (see photo). The government has stated that the Upper Room will remain state-owned.

Also yesterday, the ultra-Orthodox Jews carried placards accusing the government of lying on the status quo of the Upper Room with them.

Often Christian pilgrims - paying an entrance fee - also visit the so-called "tomb of King David" on the ground floor, pausing sometimes in prayer. The group of protesters yesterday considers this an act of "blasphemy" and "a provocation." For this they wanted to occupy the sacred site upstairs praying and dancing and driving the Christians out. Top publisher bans mentions of pork or pigs in schoolbooks 'so as not to offend Muslims or Jews'
Top academic publisher the Oxford University press has issued guidance that authors should avoid using pork-related words. Christians of the Holy Land on "60 Minutes" (Article & Video)

Christians of the Holy Land on "60 Minutes" (Article & Video)
The exodus from the Holy Land of Palestinian Christians could eventually leave holy cities like Jerusalem and Bethlehem without a local Christian population, Bob Simon reports.
Comments
×