A Time to Weep and a Time to Laugh 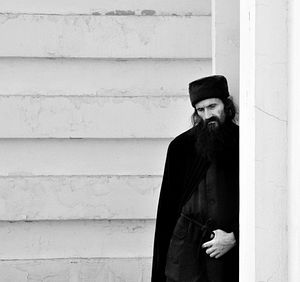 Monk John. Photo: Mikail Timofeyev.
Reading the Sayings of the Desert Fathers, I came across the following:

A hermit saw someone laughing and said to him, ‘We have to render an account of our whole life before heaven and earth, and you can laugh?’

While this probably strikes most as curmudgeonly, for us Christians, a reference to the Last Judgment ought to inspire sober reflection. How appropriate is frivolity given the desperate spiritual state within which we find ourselves—and the world at large?

The monastic rule of life, while at once being a model for all Christians, is still in many respects different from the rule of Christians living in the world. One assumes that, had the hermit seen a mother’s joyful laughter at her one year old child, he wouldn’t rebuke her as he did a fellow monk who was neglecting prayer. The distinctness of the vocations must be kept in mind.

Nevertheless, consider the degree of frivolity and lack of seriousness that is fostered by a culture (and economy) fueled largely by entertainment; often entertainment experienced on devices whose primary function is distraction. Not all of it, of course, is the sort of distraction that provokes laughter, but most of it leads to forgetfulness regarding our salvation. Consider the degree to which we all—not least of all, myself—busy ourselves with trivial matters that distract us from our dire, spiritual circumstances.

When I take a step back and examine our culture from this perspective, it’s staggering. We need to both hear and take seriously—though not make an absolute rule—the words of this hermit, rather than making excuses. When we examine ourselves honestly, and focus less on self-justification, we are well served. Like all aspects of Orthodox spirituality, there is a delicate balance involving ascetic self-control, as all sins in scripture are characterized by excess: gluttony, drunkenness, sexual immorality, and other uncontrolled urges.

Such warnings aren’t unique to this desert father, but are rather a steady drumbeat within our Orthodox spiritual tradition. Laughter is often associated with the passions, a forgetfulness of death, and a neglectful spirit towards prayer.

While it’s easy to imagine Jesus smiling on regular occasions, and while certain sayings might have had a twinge of humor to them (I’ve heard many claim as much, at least), our Lord is never shown in the Gospels as having laughed—and yet, he isrecorded as having wept. The same goes for the Theotokos and St. John the Forerunner. Indeed, Our Lord even uttered: “woe to you who laugh now, for you shall mourn and weep” (Luke 6:25). There’s probably something to this.

All that being said, it’s also true that there is “a time for every matter under heaven,” including “a time to laugh” (cf. Eccl. 3:1—8). In addition to a mother’s mirth at her child, we can also use humor to comfort those who are in pain or spiritually weary. There are even “Fools for Christ” who use it as a means by which to disguise their own virtues.

I fear, however—and I know this to be true for myself—that most of the laughter we indulge as a culture is of the distinctly immoderate and even useless variety, inspired by a felt need for distraction from our spiritual reality. When we begin to ponder the seriousness of what we say, what we teach, how little we pray, or how much we think about the shortcomings of others, Satan will always find a way to distract us through entertainment and other vices of the modern world.

There is nothing more serious in our lives than salvation. And yet, when fully affected, our salvation and spiritual journey can be an incessant, permanent joy—even amidst all the sin, sorrow, and death in this present, evil age. We must drink deeply of that joy, delighting in God and His goodness, allowing it to fully permeate our lives. And we must be careful not to confuse it with fallen, counterfeit ways of being, which often lead us to forgetfulness of God and His desire to be in fellowship with us. Teaching Your Children to Mourn
Angie Giallourakis
What does it mean for us, as parents, to provide proper instruction to our children so that they may live a spiritually rich life? Should we make sure our children attend Sunday school or monthly youth group meetings? Well, that is a good start, but we need to do more. We need to help our children become spiritually rich by role modeling and engaging them in conversation about how to make the effort to become closer to God and feel His love. Orthodox monasticism featured on American TV for Pascha
American television viewer were treated to a look inside the sacred world of Mt. Athos and other Orthodox monasteries during this year's Holy Week and on Pascha Sunday.
Comments

Leonard Carl6/21/2014 5:09 pm
Though your name is not Russian, it should be!
Laughter is necessary, desirable, and the only way (outside practicing the Sacraments) that one may get through this life! Derisive laughter or rending others out of passions, is never good. But laughter is almost a sacrament in itself; I will pray for your today that in your addressing the above issues an affirmative approach to the matter will be with your spirit.
×