O Prophet and Forerunner of the coming of Christ, we who venerate thee with love, are in perplexity how worthily to praise thee; for the barrenness of her who bore thee and the dumbness of thy father are loosed by thy glorious and precious nativity, and the incarnation of the Son of God is preached to the world.
– Troparion of the feast

The Nativity of John the Baptist is an event pointing to the Nativity of our Lord Jesus Christ. “The star of stars, the Forerunner, is born on earth today, from a barren womb, John the beloved of God, and manifests the dawning of Christ, the Orient from on high” (from the Praises at Matins on the Feast). From this day forward the preparation of the human race begins to meet of the Son of God on earth. The announcement of the holy Archangel Gabriel to Zacharias in the Temple begins the New Testament Gospel. The announcement of the same Archangel Gabriel six months later in Nazareth to the Virgin Mary, is the continuation of the revelation of concerning the salvation of the human race. 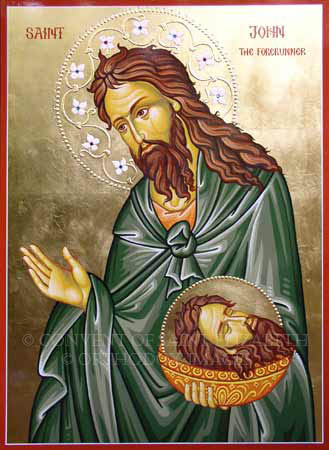 Saint John the Forerunner
This feast is the first joy sent down by God to the human race, the beginning of it deliverance from the power of the devil, sin and eternal death. It is an expression of our thanks to God who has delivered us from the horrible barrenness of sin and death. We are no longer impaired by dumbness of spirit which smothers the creative powers of the heart and mind. We are now infused with hope and love which transforms us to transcend our inherent limitations and find a new way of living. Granted this new way of living, we are united to the divine life and gradually, through our ascetic efforts, we achieve a new awareness and joyfulness by the grace of God.

As members of The Church, we are called to proclaim the wonderful works of God. We are to proclaim and show that the barrenness and dumbness of creation has been filled with life and praise. God has given us the greatest of prophets, to show us how we should prepare ourselves to greet the Lord. Like John, we are to continue to remind ourselves of the prophetic words which awakens our barren soul from the slumber of sin. Like John, we are called to direct our lives toward repentance by which we are drawn into the embrace of the Giver of Life.

Celebrating the Feast of the Nativity of the Holy, Glorious, Forerunner, and Baptist John; we reaffirm the joy by which God regenerates and transfigures life; grants the newness of life emerging from the barrenness of sin and death; and visits and heals us through His grace and love for mankind.

Today the formerly barren woman gives birth to Christ¹s Forerunner, who is the fulfillment of every prophecy; for in the Jordan, when he laid his hand on the One foretold by the prophets, he was revealed as Prophet, Herald, and Forerunner of God the Word.
– Kontakion of the feast The Nativity of St. John the Forerunner and Baptist of Christ
July 7th (June 24th old calendar)
Six months before his appearing to the most holy Virgin Mary in Nazareth, the great Gabriel, archangel of the Lord, appeared to Zacharias the High Priest in the Temple in Jerusalem. Before he revealed the miraculous conception by a virgin who had not known a man, the archangel revealed the wondrous conceiving by an old and barren woman.

The Nativity of Saint John the Baptist
St. John of Shanghai
Being born exactly half a year before Christ, John the Forerunner by the exact time of his birth depicted his mission of preparing the way for the Lord. He was born at the time of the year (June 24) when the day begins to grow shorter after the summer solstice, whereas the Nativity of Christ occurs (December 25) when the day begins to grow longer after the winter solstice. These facts are an embodiment of the words spoken later, by the Forerunner, after the beginning of Christ's preaching: He must increase, but I must decrease (John 3:30).
Comments

Peter Dias6/17/2020 3:53 pm
Thanks for sharing the details of Saint John The Baptist let my prayer be heard and I to may be follow like him for our Saviour Jesus.
×