An interview with Vladimir Legoida, Chairman of the Synodal Informational department of the Russian Orthodox Church

On Saturday, July 5, His Beatitude Vladimir (Sabodan), Metropolitan of Kiev and All Ukraine reposed in the Lord at age 78. He was the head of the Ukrainian Orthodox Church, Moscow Patriarchate from 1992 until his retirement due to illness in 2014. His funeral service was conducted on July 7 at 7:00 a.m., in the square before the Dormition Cathedral in the Kiev Caves Lavra in Kiev. He was buried at the Lavra cemetery, near the Church of the Nativity of the Mother of God.

His Beatitude Vladimir, born Viktor Markiyanovich Sabodan in the Khmelnitsky region of the Ukraine, began his service to the Church at nine years of age in his village church of the Archangel Michael. The rest of his life was spent in total dedication to the Ukrainian Orthodox Church.

Vladimir Legoida, Chairman of the Synodal Informational department of the Russian Orthodox Church, gave an interview to the news agency Interfax-Religion discussing His Holiness Patriarch Kirill’s decision not to go to Kiev for the funeral service despite his long friendship and deep respect for Metropolitan Vladimir. 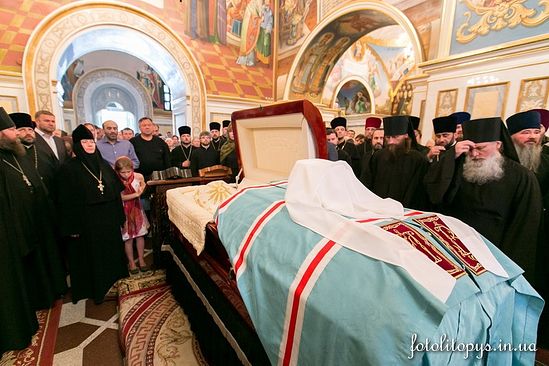 —His beatitude’s departure is a very heavy loss—for every believer in the Ukraine, and for all the children of the Russian Orthodox Church. The many-million strong flock of the Russian Orthodox Church all over the world knew and respected His Beatitude, and sorrows today over his death. Metropolitan Vladimir’s authority was unquestionable not only by the Orthodox faithful—even those who were in disagreement with him about many things nevertheless respected him. As His Holiness Patriarch Kirill wrote in his letter of condolence, “Even those who did not share his convictions could not but relate to him with personal respect… In the words of the apostle, he was all things to all people, so that he might by all means save some (cf. Cor. 9:22).

—His Holiness the Patriarch and His Beatitude Vladimir were personal friends—this is a generally known fact. In this connection, we cannot help but ask the question: Why didn’t the Patriarch himself go to Metropolitan Vladimir’s funeral? Various explanations have come up, including for security reasons.

—Of course, it would be quite logical to suppose that the Patriarch would personally come to send along the “way of all earth” one of the oldest members of the Holy Synod, the head of an autonomous Church, and a close friend… There is only one thing that could guide a pastor to make a decision to the contrary. That is his concern for his flock, his readiness to deny his own feelings calling him to be in Kiev during such a time; to avoid any damage that could be done to a God’s work, so that no one would prevent the Orthodox faithful in the Ukraine from taking leave of their father, a quiet man of prayer, with dignity, and so that no affront against the memory of the reposed might be allowed. There are no other reasons. It is quite obvious that due to the current situation in the Ukraine, the Patriarch’s arrival would turn his opportunity to pay his respects to the Metropolitan into an excuse for one more demonstration by radical forces. And these hours, filled with grief and quiet prayer for all who knew Metropolitan Vladimir, might have turned into a demonstration of human rage and aggression, and even quite possibly have led to violence against those who came to the burial of the First Hierarch of the Ukrainian Church. Of course we understand that such radical elements are the minority, that the faithful children of the Ukrainian Church are always glad to see their Patriarch. But we also understand that this absolute minority is enough to cause what is impermissible. His Holiness the Patriarch could under no circumstances proceed with something that would enable such a thing to happen—that a man who had given his whole life to the Church, who had all his life been a peacemaker, should bring to the Ukrainian people displays of hatred instead of peace and calm. His Beatitude Vladimir does not deserve that.

This conviction is based not only on a general understanding of the situation, but also on quite specific information that we have received from Kiev. Incidentally, a quick analysis using open sources show that there is a maximally high probability of just such an uncontrollable demonstration by radicals. Alas, regardless of all the many calls the hierarchy of the Russian Church has made for peace, regardless of the peace-making stance taken by the Ukrainian Orthodox Church, the situation remains very complicated. Unfortunately, there are as yet no grounds for supposing it could change for the better any time soon. Therefore, the Patriarch is forced to help his beloved Ukrainian flock both prayerfully and actively without visiting the territory of the Ukraine.

As for security… As a person who has been near the Patriarch for a long time, I can say that fear is not the feeling that influences the Church’s Patriarch’s decisions. And His Holiness has shown this many times. More than once, the Patriarch’s visits to the Ukraine were accompanied by attempts to persuade him against visiting certain regions. I remember back in 2009, there were desperate attempts to prevent the Patriarch from going to Rovno. The security service members of all ranks told him in no uncertain terms that he mustn’t go there, that it is very dangerous, and so on. His Holiness went to Rovno. And he prayed there with thousands of the faithful who were waiting for their Patriarch with love. But even then, he did it in a way that would not allow for threats of clashes and bloodshed, which, as specialists testified, at one point really did exist. But now the situation—and it is very important to understand this—is absolutely different. Now we are talking not about the Patriarch’s safety, but about the right of an unquestionably worthy First Hierarch of the Ukrainian Church to be buried with due glory and honor.

—Have any other hierarchs gone to Kiev from Moscow?

—With the blessing of His Holiness Patriarch Kirill, Metropolitan Hilarion of Volokolamsk, a permanent member of the Holy Synod of the Russian Orthodox Church, has flown to Kiev to pay his last respects to Metropolitan Vladimir.

—Vladimir Romanovich, one more important question: how do you see the future of Orthodoxy in the Ukraine after the repose of His Beatitude?

—Having served a litia for the reposed today in Novodevichy Convent today, Patriarch Kirill said, “May God grant that canonical Orthodoxy be preserved inviolable in the Ukraine. We believe that the reposed Metropolitan Vladimir will be praying for this before the face of God, and all we who remain here will strive, so that the spirit of this age might not destroy the divine and human organism of the Church.” To these words we can only add that His Holiness prays every day for his Ukrainian flock, for peace in the Ukraine, and makes a daily effort to ensure that peace would reign in the much-suffering Ukrainian land, so that people might live without fear and hatred. I believe and hope that in the not so distance future, when the situation normalizes, His Holiness the Patriarch would again be able to pray together with his flock in his beloved Ukraine.