Twisted History Against Russia and Serbia 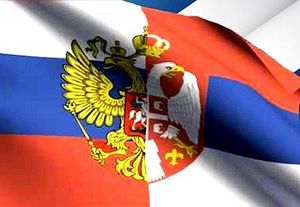 The June 20 Gray Falcon commentary “Failure to Communicate” has this excerpt, that led me to an extremely anti-Russian and anti-Serb article, from a venue which has previously slanted in that direction:

“The latest example of this ‘flipping the script’ is a New Republic feature comparing Putin to Milosevic. In reality, it is the West acting towards Russia the same way they acted towards the Serbs two decades ago. I’ve argued before that Putin is aware of this, though the Russian public and media in general may not be.”

Whether the issue is the Caucasus or Ukraine, bombing Russia hasn’t been considered, unlike what Serbia hypocritically faced. Russia’s nuclear power stature provides it with more cover.

Contrary to what the aforementioned New Republic article “History Repeats Itself” of this past June 19 suggests, the disputes involving Russia and Serbia, haven’t been simple instances of sinister action by the two against less culpable others. On the subject of Serbia and in contrast to that New Republic piece, I’m reminded of the August 1999 First Things commentary “The Condescension of the Christian West“, which is written by someone who has supported the so-called “Orange Revolution” and more recent Euromaidan protests in Ukraine. (The First Things article is mentioned without necessarily agreeing with everything said in it.)

The New Republic article’s comparison between the Russian and Serb Orthodox churches (viewed with negativity), with the Croat Catholic and Ukrainian Greek Catholic variants (spun more favorably), is one of several examples. The WW II period and thereafter have seen noticeable pro-Ustasha sentiment in the Croat Catholic Church, which has included Jasenovac concentration camp head Dinko Sakic and key Ustasha leader Ante Pavelic being openly lauded by some Croat Catholics. Similarly, pro-OUN/UPA sentiment in the form of lauding Galician Ukrainian nationalist leader Stepan Bandera, is noticeably evident within the Ukrainian Greek Catholic Church.

I’m aware that a rebuttal will note how it’s wrongfully inaccurate to lump a collective negativity on the Croat Catholic and Ukrainian Greek Catholic churches. Not everyone in these churches march to the same tune. How ironically repulsive it is to negatively caricature the Russian and Serb Orthodox churches. The neoliberal leaning New Republic finds common cause with pro-Ustasha and pro-Bandera advocates.

Within reason, it’d be considered gratuitous to accentuate Poland’s pre-WW II discriminatory actions against non-Poles, as a basis to suggestively rationalize the ramifications of the Molotov-Ribbentrop agreement. Likewise, pre-Communist Yugoslavia never came close to the kind of brutal suppression exhibited by the Nazi allied Croat Ustasha. Prior to WW II, Pavelic was involved in political terrorism against the Yugoslav government, as was Bandera against the Polish government. The New Republic piece glosses over these and other particulars, coming in conflict with an anti-Serb and anti-Russian slant.

From that New Republic article, this excerpt underscores the last observation:

“The story begins in the early twentieth century, when the USSR and the Kingdom of Yugoslavia were established. In both cases, the metropolises of Russia and Serbia-both countries of eastern Orthodox religion that considered themselves alternative, non-Western civilizations-imposed their rule upon the Catholic and much more pro-Western Croatia and Ukraine.”

As a nation unto itself, Serbia was on the side of the Western powers during WW I, much unlike Croatia’s predicament. WW I saw Croat territory affiliated with Austria-Hungary. During this period, the future non-Serb (half-Croat, half-Slovene) Yugoslav Communist dictator Tito, was a corporal in the Austro-Hungarian army. It’s also true that before WW I and thereafter, the movement for a multiethnic south Slav state had support among Serbs and non-Serbs alike in the Balkans.

In WW II, the Ustasha state of Croatia had a privileged standing in Nazi occupied Europe, much unlike Serbia. WW II Serb transgressions never came close to matching the anti-Serb Orthodox brutality of the Croat Ustasha, which included savagery against Jews, Roma and dissenting Croats.

The official Communist Yugoslav propaganda against the Serb Yugoslav royalist army General Draza Mihailovic and his forces, hasn’t factually countered the Nazi wanted posters for him, Nazi documents regarding him as an enemy, as well as the pro-Mihailovich testimony of Allied Western airmen shot down over Yugoslavia. (The anti-Mihailovic take is shared among anti-Communist/anti-Serb sources.) Milan Nedic, another Serb commander (but of a lessor stature to Mihailovic), headed a Belgrade located Nazi collaborationist entity, which didn’t come anywhere near matching the degree of authoritative power and culpability in atrocities as the Croat Ustasha state. Some view Nedic as an individual who tried to make the best out of a bad situation. WW II atrocities in Serbia were overwhelmingly committed by Nazi allied non-Serbs. The Serbs in Serbia were very much brutalized.

Fast forward to the present, the breakup of Yugoslavia included extreme nationalist views among key Croat and Bosnian Muslim nationalist leaders, as well as atrocities committed by people who supported either of them. In terms of rhetoric, Milosevic didn’t come across as being more extreme than his peers, Croat President Franjo Tudjman and the Muslim Bosnian President Alija Izetbegovic.

These comments aren’t intended to excuse 1990s wrongdoing on the Serb side. At the same time, Serb wrongs were often exaggerated in a way that included significantly inflated fatality figures (among other claims), that were used to lobby for foreign military intervention, in support of the sides that were militarily losing to the Serbs.

In the late 16th century, Polish rule in western Ukraine encouraged the development of the Greek Catholic denomination, as a basis to woo Ukrainians away from Orthodox Christianity, for the purpose of limiting ties to Russia. In this developmental phase, Polish rule made it more difficult to be an observant Orthodox Christian. On a related note, the early 17th century Polish incursion into Russia, included repressive measures against the Orthodox Church. (The October 28, 2009 Russia Blog article “The Russo-Polish History Coverage and Some Related Matters“, provides additional insight on the history of Russian-Polish relations.)

Over the course of time, the existence of the Ukrainian Greek Catholic denomination didn’t lead to its followers becoming so agreeable to Polish rule. During the Russian Civil War, the Galician Ukrainian army en masse preferred to come under the command of the anti-Communist Russian Whites, rather than enter into an alliance with Ukrainian nationalist leader Symon Petliura, who (out of his weak position) made a pact with Poland, which involved his recognition of all of Galicia going to Poland. As a part of Poland, western Ukrainians like Bandera became violently opposed to Polish rule. Upon western Ukraine becoming a part of the Soviet Union, the Ukrainian Greek Catholic Church was greatly suppressed, at a time when other religious denominations including the Russian Orthodox Church, were very much compromised.

Within logic, there’s the impression that for the purpose of promoting an offset to Russian influence in Ukraine, some in Poland (as well as elsewhere) have downplayed the brutal WW II era anti-Polish activity of Galician Ukrainian nationalist forces loyal to Bandera. On a related note, an acquaintance informed me of a DC area think tank event a few years ago, which included a pro-Bandera organization. Bandera was uncritically lauded at that event. My acquaintance was told to shut up, after she told the think tank executive of Bandera’s negative attributes. (Pardon the confidentiality of this recollection. This personal account was communicated to me off the record.) There’ve been several Western mass media TV segments, showing the black and red pro-Bandera flag, without mention of what it represents.

The New Republic article parrots the inaccurately standard claim that downplays the nationalist anti-Russian actions, which have become more prominent in Ukraine, following the ouster of Ukraine’s democratically elected, albeit imperfect President Viktor Yanukovych. (On the last thought, what follows in this set of parenthesis, is a reiteration of my previously stated observations, which are restated for the purpose of having a direct reference to my contention. Yanukovych’s ouster saw the following developments become either implemented, or enhanced from what they’d been:

As a follow-up to the last point, the ancestors of modern day Ukrainians, whether in the Romanov or Habsburg empires, had mostly supported Russia against Napoleon.)

A segment in a BBC telecast highlighted how Kiev and Lviv are presently more peaceful than eastern Ukraine. The reverse was true months ago. Since the Kiev demonstrations against Yanukovych, Crimea, the most pro-Russian part of the former Ukrainian SSR, has been virtually bloodless, much unlike what transpired in Ukraine’s capital – something which includes some culpability among the anti-Yanukovych opposition. Meantime, the sending to eastern Ukraine of forces supporting the Yatsenyuk-Turchynov regime and its successor, hasn’t resulted in a decrease of fatalities in that area. Rather, the introduction of these combatants has greatly added to an increase in casualties.