How Sex is Derailing Lutheran-Orthodox Dialogue 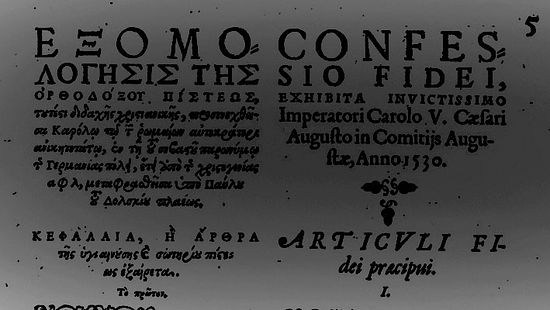 The outcome of the dialogue in Tallinn was sobering, as it is difficult to come closer on substantive issues. The question of women’s ordination is regarded as church-dividing, at least from the Orthodox angle . . . Consequently I think we on the Lutheran side have to think about whether progress in dialogue is to be expected at all.”

These sobering reflections come from Rev. Dr. Jennifer Wasmuth, a participant in the Joint Commission for theological dialogue between the Lutheran World Federation (LWF) and the Orthodox Church, following recent discussions in Estonia. The meeting, which took place May 8-13, focused on the question of women’s ordination. If Wasmuth’s words above are anything to go by, it doesn’t sound like it was the most fruitful of discussions.

As Wasmuth explains, “The simple and crucial difference is that ordaining women is not recognized in Orthodox churches, while in most Lutheran churches it is not only recognized but already practiced.”

This is not exactly news—female ordination among churches of the Lutheran World Federation has been a perennial strain on ecumenical relations with the Orthodox (and Roman Catholics for that matter) for some time. The election of female bishops by some Lutherans has only exacerbated tensions. In 2010, for example, the election of a female bishop in the Evangelical Lutheran Church of Finland prompted statements of concern from the nation’s Catholic and Orthodox leaders. “As a theological decision, it is a step away from efforts toward unity,” Archbishop Leo of the Finnish Orthodox Church noted.

A year earlier, the election of a woman as head bishop of the Evangelical Church in Germany (EKD) brought a quick rebuke from the Russian Orthodox Church. “We planned to celebrate the 50th anniversary of our dialogue with the Lutheran Church in Germany in late November or early December,” Metropolitan Hilarion of Volokolamsk noted at the time. “The 50th anniversary of the dialogue will become the end of it.” The EKD eventually canceled celebrations altogether when Metropolitan Hilarion decided not to attend.

Not long after that declaration, Metropolitan Hilarion summarized the problems at play in Orthodox-Lutheran dialogue in an interview with Der Spiegel. “Many Protestant churches have liberalized their notions of ethics, giving a theological justification to homosexuality and blessing same-sex couples,” he said. “Some refuse to consider abortion to be a sin. We do not share the understanding of the Church and church order, especially as the Protestants, unlike the Orthodox and Catholic Churches, ordain women.”

Likewise, a 2011 Inter-Orthodox evaluation of dialogue between the Orthodox and the LWF on the global level noted similar issues straining relations. “The ordination of women on all levels of clerical orders,” it wrote, “is a clear deviation from Christian practice,” as is “the emergence of a new moral-code concerning human sexuality and especially homosexual relations.” “In the eyes of most Orthodox,” the report continued, “these new ecclesiological and controversial anthropological innovations in the Lutheran world constitute radical challenges and serious obstacles to the Orthodox-Lutheran theological dialogue and to its original aim, namely, the promotion of mutual ecclesial rapprochement and, eventually, of Church unity.” While the report recognized much good had come from discussion with the LWF, it nevertheless concluded that issues like women’s ordination and innovative teachings on human sexuality “call into question the value of much that we have achieved in our dialogue.” “Lutherans should understand,” the report continues, “that these issues are major difficulties in our dialogue and may jeopardize its continuation and success.”

In other words, the major roadblocks to progress in Lutheran-Orthodox discussions are actually the hallmarks of liberal Protestantism—hallmarks of the theological direction that many churches of the Lutheran World Federation have taken. They are also, unsurprisingly, the same problems which have been frustrating Lutheran–Roman Catholic dialogue—something I’ve written about before. But as I wrote in that earlier post, it’s important to note that liberal Lutheranism isn’t the only game in town: There also exist confessional Lutheran churches like those of the International Lutheran Council (ILC)—churches which remain faithful to the Church’s historic teaching on the subjects of sexuality and female ordination. Consequently, just as Roman Catholics and ILC Lutherans have begun looking to each other for closer relations, it may well be that in the future Orthodox Christians find closer agreement with confessional Lutherans than with the LWF.

Mathew Block is editor of The Canadian Lutheran magazine and communications manager for Lutheran Church–Canada. He also serves as editor for the International Lutheran Council. He tweets@captainthin. The header image comes from a 1574 translation of the Augsburg Confession into Greek, which was sent to Patriarch Jeremias II of Constantinople. This was the first (albeit short-lived) Orthodox-Lutheran dialogue. In Greek, the title reads: “A Confession of the Orthodox Faith.” Lutherans Write the Patriarch: How the “German Orthodox Church” Almost Happened
Gabe Martini
Like Luther, Melanchthon believed that their “reformed” faith — as a “peeling away” of the numerous developments and supposed abuses of the Latin Church over the centuries — would be virtually one and the same as the faith of the “Greeks” in the east. To that end, the leading “Lutheran” theologians of the day had their Augsburg Confession translated into Greek, and sent with their new-found friend in Demetrius back to the Patriarchate of Constantinople. World - Dialogues of Truth. Great Anthony and contemporary ecumenism
Protopresbyter Theodore Zissis, Professor of the Theological School of the Aristotelian University of Thessaloniki

World - Dialogues of Truth. Great Anthony and contemporary ecumenism
Protopresbyter Theodore Zisis
It is truly dreadful the vision that Saint Anthony had regarding the presence of the heretics inside Orthodox churches. This vision illustrates and explains graphically the reasons why the Holy Fathers forbid with Synodal canons the entry of the heretics into consecrated places, their participation in services and liturgies, with common prayers and common worshipping.
Comments

anonym7/15/2014 11:19 am
Sad development. Surely this means soon that lutheran babtism is not valid in any shape or form for those who convert to orthodoxy from it.
×