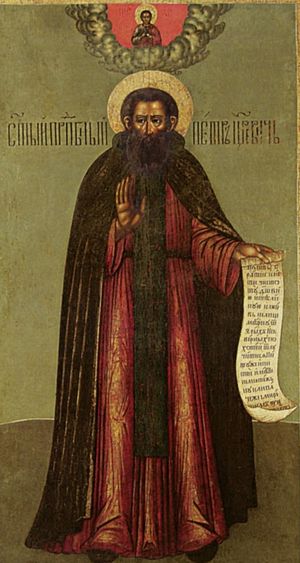 In 1253, St. Kirill, Bishop of Rostov (May 21/June 3) went to the Horde for intercession concerning ecclesiastical needs in his diocese, and told the Khan about the miracles wrought at the relics of Holy Hierarch Leonty of Rostov (May 23/June 15). Among his listeners was a young nephew of the Khan, upon whom the holy hierarch’s words made a very strong impression. Some time later, Bergai’s son fell ill. Recalling the Russian bishop’s story about the healings, he summoned St. Kirill, and at his prayers the sick boy was healed. The Khan bestowed rich gifts upon St. Kirill and sent him back to his diocese. Along the way, the youth, the nephew of Khan Bergai caught up to the holy bishop and begged him to take him to Rostov.

In Rostov from the time of Grand Prince Constantine, divine services were performed with special grandeur, with one cliros singing in Church Slavonic, and the other in Greek. These services amazed the young Tsarevich. After the repose of St. Kirill (1261) Tsarevich Peter received holy Baptism, and was given the name Peter. 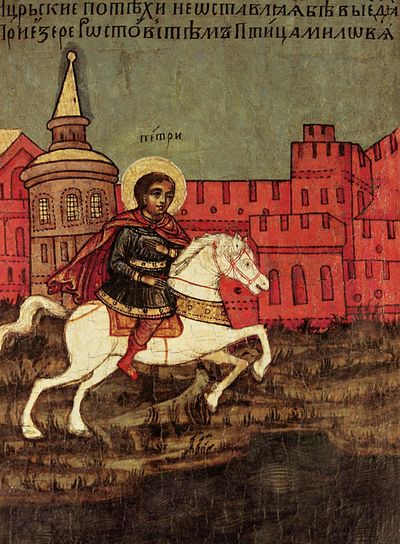 St. Peter hunting. Fragment, margin of the icon with his life.

Peter often hunted on the shores of Lake Nero. One day, after the holy hierarch Kirill had reposed, Peter fell asleep on the shore of the lake after a hunt. He had an amazing dream: two men shining with an unearthly light woke him and said, “Peter, your prayer has been heard, and your almsgiving has risen to God.” Peter was frightened at first—the men where much taller than the normal human height, and were surrounded by a bright light. “Do not be afraid, Peter. We were sent to you from God. Take these two bags from us, one with silver, the other with gold; in the morning go to the city and buy the icons of the Most Pure Mother of God with the Pre-eternal Infant, and of the saints,” said the men. 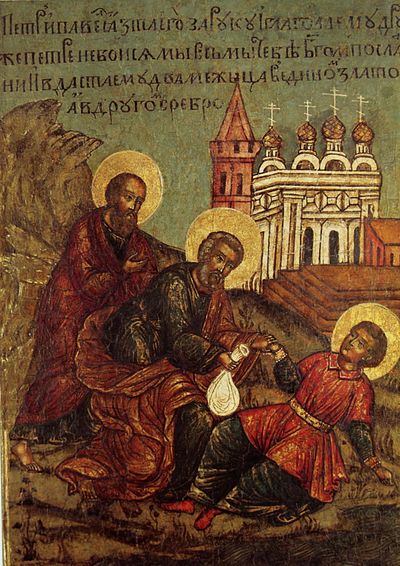 Apostles Peter and Paul given bags of gold and silver to St. Peter. Fragment from the icon with his Life. 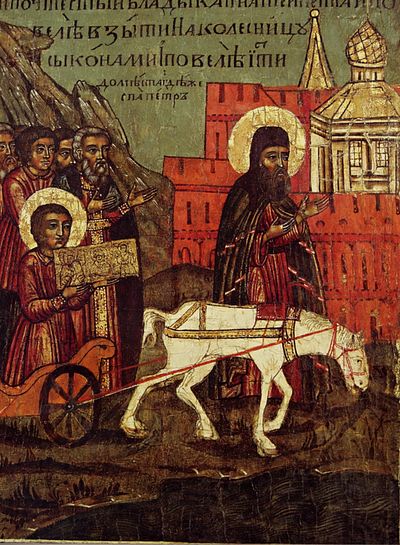 Bishop Ignatius and Tsarevich Peter taking the icons to the site of the future monastery.

The Tsarevich was distinguished by his love of silence, divine contemplation and prayer. However, the bishop urged him to marry. Peter married a noble Tatar maiden who lived in Rostov with her parents and the couple had many children.

After the death of his wife, not long before his own repose, the saint received the monastic tonsure in the monastery he had founded. St. Peter died in deep old age in 1290.

Veneration of St. Peter the Tsarevich began from the fourteenth century. His universal commemoration was established at the Council of 1547. Blessed Alypia, Fool-for-Christ of Kiev
Sergei Geruk
Further on in her life we read how she was miraculously freed from prison, and how the Apostle Peter appeared to her. In light of this fact and her later life of prayer, it becomes clear why she prayed so many years directly in front of the large icon of the Apostles Peter and Paul located in the right side-altar of the Demeyevsky Church in Kiev.
Comments
×