On Military Service and the Defense of the Fatherland

The holy monastic elders who carried out their ascetic struggles at Optina Hermitage never remained indifferent to Russia’s fate, and indefatigably prayed for the Motherland and for their fellow countrymen. 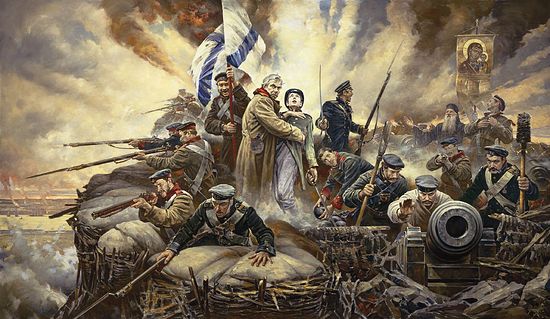 Nesterenko. We will hold Sevastopol’ against the enemy.


The Crimean War began in 1853, and in 1855 the muster of the militia was announced. St. Macarius followed the wartime events with anxiety. When, after a year of heroic defense, the Russian troops left Sevastopol’, the saint fell on his knees before the icon of the Mother of God and fervently prayed for a long time, flooded with tears.

The starets wrote about soldiers who laid down their lives on the field of battle for the Fatherland:

“Many who have laid down their lives on the field of battle, will doubtless receive remission of sins, and many will be crowned with imperishable crowns of heavenly glory, while their close ones who are left behind — and all in general who are suffering over this inside and enduring a lack of many things — involuntarily will leave luxury and will be strengthened in the faith.”

St. Anthony, upset seeing that certain young noblemen were evading service to the Fatherland, wrote to one of his spiritual children:

“And so, cast off your timidity, which is how women are disposed, and be a patriot who is even ready to sacrifice his own life in order to save the Fatherland. The nobility has the shortest call to service — from six to fifteen days, and that is why, not putting it off, you should hurry there, so as not to get convicted for procrastination and evasion.”

Wishing to rouse the young man to quick action, worthy of a nobleman and of a Christian person, the elder also turned to the young man’s wife, who was his spiritual daughter. The saint1 advised her not to hold her husband back:

“Our sovereign Emperor is summoning, by an Imperial declaration, all classes of society in the nation to participation—to the battle with our common enemies, whoever is able. And therefore, one must not be fainthearted in such circumstances, but be ready to sacrifice one’s own safety for the safety of the Fatherland, and thus to prove oneself to be a patriot, like our forefathers in 1612 and 1812.

Stop your cowardice and give yourself, in everything, to God’s will, for the Lord is able to save your husband from being selected and to set you at ease. But if it so please Him to engage him in the podvig2 of service, then He will also grant him strength, and keep him unharmed, and finally, return him to you safe.”

As to the question of whether one may pray about escaping military service, St. Barsanuphius answered the following:

“May we pray about escaping military service? No. We must give this entirely up to God’s will, for above all, it is in accordance with the law. And then, we don’t know whether this [escape] would be good for us. To pray for this is equivalent to praying for escape from obedience. No, it is definitely better to give it up to the will of God.”

St. Barsanuphius backed up his teaching with an example from his own life. In 1904, at the time of the Russo-Japanese War, the 59-year-old starets set off for the front, with the blessing of his father-confessor, St. Nectarius. There he gave spiritual guidance and service to the St. Seraphim of Sarov military hospital: he confessed, communed, and performed Holy Unction over the wounded and dying soldiers.

And the elder himself was time and again exposed to mortal danger. St. Barsanuphius related this story in a conversation with his spiritual children:

“When I encountered wounded Russian soldiers face to face, I was convinced of what a great abyss of Christian love and self-sacrifice lies in a Russian man’s heart, and nowhere, perhaps, are these qualities apparent with such striking force and greatness as on the field of battle.

Only in terrible times of war can we experience for ourselves that faith in Christ is the breath and life of the Russian people, that with the loss or decline in this faith in the heart of the people, their life also inevitably comes to an end.”

Lights of the Orthodox Faith, unshaken pillars of monasticism,

Consolers of the Russian land, O holy elders of Optina,

Who have acquired love for Christ and have laid down your lives for your children,

Pray to the Lord that He confirm your earthly Fatherland

in Orthodoxy and piety and save our souls!3

3 There is also a ROCOR troparion:

Abiding in unceasing prayer, * embracing both the good and the wicked with love,* O holy elders of Optina,* ye did serve both God and neighbor." Through vigils, tears, and fasting ye did receive the gift of all manner of miracles. * Glory to Him Who hath given us such intercessors.* Glory to Him Who hath glorified you.* Glory to God Who is wondrous in His saints.—Trans. Military “mobile” churches for the Arctic to be consecrated in Kaliningrad
The construction of the mobile churches was funded by the Omofor Kaliningrad regional charity fund for support to Security and Protection of law veterans and invalids. The fund received this request from the administration of the Railroad troops of the armed forces, reports the Baltic Fleet’s press service.
Comments

Fred7/30/2014 1:04 am
Travis, the section of the article you are addressing appears to be mixing the faith with Nationalism. (Also known as
Zionism in some cases)
I would think that would be a very dangerous path for a Christian. I would assume this is a lack of discernment on behalf of the writer and we should offer prayers for all of us to have more discernment. It is my feeble and week and sinner filled understanding that our only relationship concern is with God and not any Government of any kind.

We(Americans) have to hold the truths of the Orthodox Church, specifically Russia, deep in our souls because of the impact many saints have on our homeland, yet we also live with the tension of fighting against our brothers and sisters, this should never be.

“Many who have laid down their lives on the field of battle, will doubtless receive remission of sins, and many will be crowned with imperishable crowns of heavenly glory, while their close ones who are left behind — and all in general who are suffering over this inside and enduring a lack of many things — involuntarily will leave luxury and will be strengthened in the faith.”
×