Repose of the Venerable Nicodemus the Hagiorite 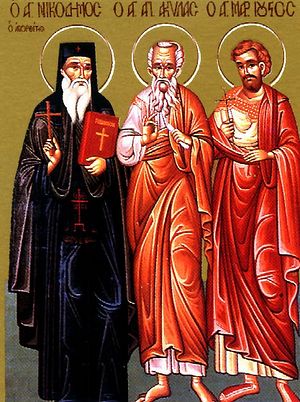 Saint Nicodemus of the Holy Mountain was born on the Greek island of Naxos in the year 1748, and was named Nicholas at Baptism. At the age of twenty-six, he arrived on Mount Athos and received the monastic tonsure in the Dionysiou monastery with the name Nicodemus.

As his first obedience, Nicodemus served as his monastery’s secretary. Two years after his entry into the Dionysiou monastery, the Metropolitan of Corinth, St Macarius Notaras (April 17), arrived there, and he assigned the young monk to edit the manuscript of the PHILOKALIA, which he found in 1777 at the Vatopedi monastery. Editing this book was the beginning of many years of literary work by St Nicodemus. The young monk soon moved to the Pantokrator skete, where he was under obedience to the Elder Arsenius of the Peloponnesos, under whose guidance he zealously studied Holy Scripture and the works of the Holy Fathers.

In 1783 St. Nicodemus was tonsured to the Great Schema, and he lived in complete silence for six years. When St Macarius of Corinth next visited Athos, he gave the obedience of editing of the writings of St. Symeon the New Theologian to St. Nicodemus, who gave up his ascetic silence and occupied himself once more with literary work. From that time until his death he continued zealously to toil in this endeavor.

Not long before his repose, Father Nicodemus, worn out by his literary work and ascetic efforts, went to live at the skete of the iconographers Hieromonks Stephen and Neophytus Skourtaius, who were brothers by birth. He asked them to help in the publication of his works, since he was hindered by his infirmity. There St. Nicodemus peacefully fell asleep in the Lord on July 14, 1809.

According to the testimony of his contemporaries, St. Nicodemus was a simple man, without malice, unassuming, and distinguished by his profound concentration. He possessed remarkable mental abilities: he knew the Holy Scriptures by heart, remembering even the chapter, verse and page, and he could even recite long passages from the writings of the Holy Fathers from memory.

The literary work of St. Nicodemus was varied. He wrote a preface to the PHILOKALIA, and short lives of the ascetics. Among the saint’s ascetical works, his edition of Lorenzo Scupoli’s book, UNSEEN WARFARE is well known, and has been translated into Russian, English, and other languages. A remarkable work of the ascetic was his MANUAL OF CONFESSION (Venice, 1794, 1804, etc.), summarized in his treatise, “Three Discourses on Repentance”. His most edifying book CHRISTIAN MORALITY was published in Venice in 1803.

The saint also made great contributions by publishing liturgical books. Using materials from the manuscript collections of Mt Athos, he published sixty-two Canons to the Most Holy Theotokos under the title, NEW THEOTOKARION (Venice, 1796, 1849).

St. Nicodemus prepared a new edition of the the PEDALION or RUDDER, comprised of the canons of the Holy Apostles, of the holy Ecumenical and Local Synods, and of the holy Fathers.

St Nicodemus had a special love for hagiography, as attested by his work, NEW EKLOGION (Venice, 1803), and his posthumous book, THE NEW SYNAXARION in three volumes (Venice, 1819). He completed a Modern Greek translation of a book by St Theophylact, Archbishop of Bulgaria, PAUL’S FOURTEEN EPISTLES in three volumes. St. Nicodemus himself wrote AN INTERPRETATION OF THE SEVEN CATHOLIC EPISTLES (also published at Venice in 1806 and 1819).

The exceedingly wise Nicodemus is also known as the author and interpreter of hymns. His Canon in honor of the Mother of God “Quick to Hear” (November 9) and his “Service and Encomium in Honor of the Fathers who Shone on the Holy Mountain of Athos” are used even beyond the Holy Mountain. Some of his other books include the HEORTODROMION, an interpretation of the Canons which are sung on Feasts of the Lord and of the Mother of God (Venice, 1836), and THE NEW LADDER, an interpretation of the 75 Hymns of Degrees (Anabathmoi) of the liturgical book called the OKTOECHOS (Constantinople, 1844). Excerpt from Hieromonk Damascene’s talk on the 30th Anniversary of the Repose of Hieromonk Seraphim (Rose)
Sept. 2, 2012, at the St. Herman of Alaska Monastery
However, it’s not until today that we have had the opportunity to apologize, in person and at a public event, to the First Hierarch of the Russian Church Abroad for our sins against the Russian Church Abroad. Your Eminence, Metropolitan Hilarion, we express our deep and heartfelt repentance for these sins, and ask forgiveness from you and from all who have been hurt by our words and actions.
Comments
×