Who Really Was Mary Magdalene? 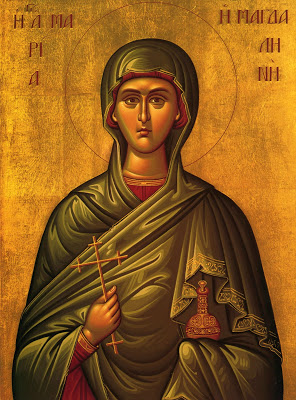 She belonged among the circle of women who followed Christ and His disciples, helping in many ways their salvific mission.

Luke the Evangelist preserves the information that many of those female disciples of the Lord maintained financially His great missionary work and contributed to its maintenance, travel, and the housing of those gathered with Jesus (Luke 8:3).1

This Mary was from Magdala, a coastal city of Galilee. This is why she is called Magdalene. The label of her origin informs us on the one hand to not confuse her with the other Mary's that followed Jesus, and it also informs us that she did not have a husband, since some of them are remembered by their husband's name (e.g. Mary of Cleopa).

A. In the West, Mary Magdalene is identified with the repentant prostitute of the Gospel who anointed the feet of Jesus with expensive myrrh and wiped them with her hair (Luke 7:36-50 & Matt. 26:6-16), in the house of Simon the pharisee.

B. In modern times, Mary Magdalene is the star of imaginary films and unhistorical novels that associate her with the sex life of Jesus, presenting her as very young and challenging.7

C. In The DaVinci Code the following alleged "truths" are presented: a) how Christ and Mary Magdalene were not only married, but they even bore children, b) that this "truth" was hidden from the Gospels, later on by Constantine the Great, c) that these "truths" of Dan Brown are preserved in the "Gnostic Gospels" and in the Dead Sea Scrolls.

What does all this mean historically and theologically? Nothing at all!

A. The misunderstanding that Mary Magdalene was a prostitute emerged because some Gospel incidents were connected to her though they involved different people, as clearly shown in the Gospels: It is a fact that this not only happened with the aforementioned repentant prostitute, but also Mary the sister of Lazarus, who after his resurrection by Jesus, had such great joy that she felt great gratitude and anointed the feet of Jesus with myrrh (Jn. 12:1-11). These two Marys of the New Testament were mistaken to be the same person of Mary Magdalene, because: a) from the latter Christ expelled "seven demons" (which is falsely considered to have come from fornication, though Holy Scripture and the Fathers of the Church explain these are the passions of the soul opposed to the Spirit of God), b) as a myrrhbearer Mary Magdalene also fell at the feet of Jesus immediately following the Resurrection of Jesus, c) because she anointed with the other Myrrhbearers the lifeless body of Jesus, thus identifying her with the anonymous prostitute who anointed the head and feet of Jesus, d) her public celebration by the Western Church for the first time was on May 4th, which was the translation of the holy relics of Saint Lazarus from Cyprus and Saint Mary Magdalene from Ephesus, resulting in the West associating Mary Magdalene with Mary the sister of Lazarus.(1,2,5,6)

B. How young was Mary Magdalene in actuality in the time of Jesus to assume that she was possessed by erotic feelings for Him? Although the Gospels do not mention something about her age, expert researchers have concluded she was around 50-60 years old, since the women were mothers of the disciples of Christ, who themselves must have been around 30-35 years old at least. Therefore, Mary Magdalene was a mature and wise disciple of the Lord, who only out of piety and beneficense, and the fact that the Lord was a Divine Teacher, remained beside Him and dedicated herself to the service of His work, together with the other female disciples.7

C. Did Christ have a family with Mary Magdalene? Let us intitially point out that no contemporary source of Jesus, biblical or non-biblical, offers any clear and detailed proof for the case that He was married. If this happened, there is no reason for this to be concealed by the Evangelists and the Apostle Paul, because not even the high priest was forbidden to marry, nor the other priests, prophets or teachers. Even Peter had a family, as well as the other apostles. Moreover, just before the God-man gave up His spirit, He assigned the care of His mother to St. John the Evangelist. According to the laws of the time, her protection should have been under Mary Magdalene, if He was indeed married. Also, in various passages of the New Testament members of the family of Jesus are referred to (His mother and father, His brothers, His sisters), but nowhere is a wife mentioned, let alone there is no reference to His widowhood. Finally, Christ is preached as the ideal of Christian living, a willful and heartfelt asceticism (without it being physically reduced by marriage). In explaining the entrance into the Kingdom of Heaven, He leads to the conclusion that He was not married (Matt. 19:10-12). Something also very important: Christ on earth was the incarnate God. His short mission was not to marry and have a family, but out of His love for all and through his Cross to save the entire world.

Were the truths described and taught in the Gospels an invention of Constantine the Great? Of course not! In the time of Constantine the Great the Church knew what it taught in regards to the Holy Trinity, the person of and divine-human nature of Christ, etc. And millions of believers had already died and were tortured in the amphitheaters and Roman arenas, because they believed Christ to be God.

And now we will ascertain what kind of "truth" is taught in the Dead Sea Scrolls and the Gnostic Gospels, according to Dan Brown. Do they reverse the authentic truths of the Gospel? Clearly not! The Dead Sea Scrolls contain nothing Christian, but only parts of the Old Testament and other fragmentary texts without reference to Christ, let alone the supposed "holy grail". The Gnostic "Gospels" (of Thomas, Philip, Mary, the Egyptians, of Truth) are dated from the 3rd century onward, were not authored by the apostles (though they borrowed their names to confer prestige on their writings), and are full of fantastic stories about the people of God and of Christ, which seek to falsify the New Testament and distort its meaning.4

But who really was Mary Magdalene?

While every flower is nourished by the earth and the sun, Mary Magdalene, as a living flower of the spirit, was worthy to be graced and sanctified by the very source of life, the God-man Jesus.8 She was worthy also to be the first to greet the Risen Christ, and then honored by the Lord to be the apostle to the apostles, a preacher to His disciples, an evangelist to the Evangelists. That is, she was the first to proclaim to the circle of His disciples His life-giving Resurrection from the tomb (John Chrysostom, On the Gospel of John). But this was granted according to divine economy. Because, as the sorrow of the world came from a woman (Eve), from a woman (the Panagia) the same Son of God was made man, and from a woman again (Mary Magdalene) the triumphant and liberating message of the Resurrection was proclaimed (see Kontakion for the Sunday of the Myrrhbearers, Tone 2).6

The Orthodox Church inherited a completely different tradition about the life and times of Mary Magdalene. She was a lifelong virgin. The purity of her soul was as a pure crystal (Archbishop Modestus of Jerusalem, On the Myrrhbearers, in the Library of Photios, archbishop of Constantinople and P.G. 104, 244). The Fathers of the Church, beginning from John Chrysostom, deeply honored her (this applies both to the Orthodox and Roman Catholic Churches), and they state that she traveled to Rome, confessed the divinity of Christ before Emperor Tiberius, returned to Palestine, accompanied the Theotokos until her Dormition, worked together with the Apostle Peter, was exiled and preached the Gospel in Marseille, acted as an apostle in Egypt, Syria and Phoenicia and came to Ephesus, together with the Theologian and Evangelist John, where she reposed. From there her incorrupt relic was transferred to Constantinople, in 890, by Emperor Leo the Wise.2

In the Monastery of Simonopetra on Mount Athos her incorrupt hand is kept, which for centuries has been preserved in its natural state, with elasticity and the temperature of a live human body. Our Church honors her as an Equal-to-the-Apostles and a Myrrhbearer, and her memory is celebrated on July 22 and May 4, the day of the translation of her relic. She is also co-celebrated with the other Myrrhbearing Holy Women on the Third Sunday after Pascha, the Sunday of the Myrrhbearers. Who was St. Mary Magdalene?

Who was St. Mary Magdalene?
St. Mary Magdalene, called by the Orthodox Church both Myrrh-bearer and Equal-to-the-Apostle, is commemorated on July 22/August 4, as well as with the other Myrrh-bearers on the second Sunday after Easter. Born in the seaport town of Magdala on the Sea of Galilee, she played an important role during Christ’s ministry, crucifixion, and resurrection. Was St. Mary Magdalene a Harlot?
Hieromonk Job (Gumerov)
The final conviction in the West about the willful and mistaken opinion that St. Mary Magdalene had been a harlot was made possible by a popular book by an Italian Dominican monk, Archbishop Jacobus de Voragine (Giacomo da Varazze), the Golden Legend (Legenda Aurea), which is thought to have been written in 1260. This collection of legends and lives of saints became the source of themes for art and literature. St. Mary Magdalene
July 22/August 4
Particularly remarkable was the determination and unusual courage which Mary Magdalene showed toward her Saviour. At the time of His greatest suffering, while He hung on the Cross and when even His apostles had abandoned Him, Mary, Magdalene stood at the foot of the Cross together with the Mother of God and the-Lord's beloved disciple, John.
Comments
×