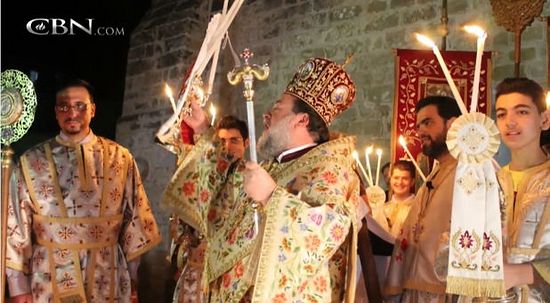 During a brief humanitarian truce this week, some 1,000 Palestinians, almost all of them Muslims, left their homes and sought refuge in one of the only two churches in Gaza. (CBN)

And Palestinian sources say Israeli ground troops and Hamas gunmen fought intense battles in the north and center of the Gaza Strip.

Meanwhile, with fighting in its 18th day, another pause for humanitarian aid may be on the horizon.

Like Muslims in Gaza, Palestinian Christians are also suffering in this war.

"We hardly go outside the house," Hamed, a secret Christian in Gaza, told CBN News. "There are missiles and rockets flying everywhere, bombs going off. It's so scary."

In an exclusive phone interview from Gaza City, Hamed described to CBN News what life has been like since the conflict started.

"The situation is very dangerous," Hamed said. "We only go out to buy food when there's a pause in the fighting. Even then we're not sure if a missile will hit or not. However, we thank God none of the believers has been hurt or killed so far."

There are no reliable figures, but estimates put the number of Christians in the Gaza Strip at about 1,500 out of a population of nearly 2 million.

Hamed is a key leader in the evangelical community. Despite the chaos, he says Gazan Christians are quietly encouraging their fellow citizens.

"We are sharing Scripture verses with our neighbors, telling them Bible stories, and using Facebook and text messages to encourage people not to give up. We have only Christ to depend on," he said.

During a brief humanitarian truce this week, some 1,000 Palestinians, almost all of them Muslims, left their homes and sought refuge in one of the only two churches in Gaza.

Nahed al-Sarfawi's home is in Shijaiyah, a district in Gaza City, where Hamas had rockets, tunnels and command centers. She said she received a recorded message from the Israeli military to evacuate the area to protect their lives.

"We were given a warning that our house would be demolished. So we came here to the church, and they told us it was safe," al-Sarfawi told CBN News.

Archbishop Alexios, head of the Greek Orthodox Church in Gaza, says many like al-Sarfawi lost everything.

"They don't have anything. They left their houses with their clothes. They have to carry their children, their babies," Alexious said.

The archbishop has hardly had time to sleep, trying to ensure that his place of worship turned refugee center is meeting needs of the displaced.

"Now we try, together with my neighbors, to help them as much as we can, to give first of all water, to give food to the babies, milk and to give medicines to those who are in need," he explained.

Hamed says the gesture by the Greek Orthodox Church has brought some unity.

"Everyone's suffering in this conflict, Christians and Muslims, so when the church opened its doors, people all felt they were together," he said.

Hamed is asking people around the world to pray for the church in Gaza.

"There are four things you can pray for," he said. "We need wisdom on how to share the Gospel with those who are broken and have lost everything. Second: Pray for our protection."

"Third, we need endurance and strength to hang on," he continued. "And fourth: for the Lord to open doors so we can meet the physical needs of people when this war is over." Orthodox Christians Ready to Render Assistance to Gaza Residents
The Imperial Orthodox Palestine Society (IOPS) has expressed its readiness to send aid to the Gaza Strip, as soon as a humanitarian corridor is created. In Gaza, even the dead get no peace

In Gaza, even the dead get no peace
The targeting of cemeteries by Israeli jets has stirred much anger in Gaza City, particularly as families are now tasked with the ordeal of reburying their loved ones. Christian Mother Jalila Ayyad Killed in Gaza "Christians Caught in the Crossfire" is Becoming A Sad Cliche as Violence Increases Throughout the Middle East
Mrs. Jalila Ayyad was killed this weekend during an Israeli bombing raid on Gaza, the first person from the tiny Christian community to die in the most recent violence. Her son was seriously injured. Israel-Gaza conflict: Greek Orthodox church of St Porphyrios becomes a small refuge in the heart of Gaza’s bloodletting
Amid all this two things were clear to the refugees who had taken refuge at St Porphyrios: they were not going to go back to their homes they had been forced to abandon, and they were not going to move to the mosque down the road. Both, they felt, would be highly dangerous.